On reflection, 2014 it has to be said, for me it was a fantastic year,  My bees behaved themselves, or did i begin to understand how to manage them better?

Swarms came very easily, the first on the 17th April, a record for me followed by another 4 days later which proved it wasn't just a freak swarming. I have various theories about this, but logically one can put this down to several reasons, the first being the very mild winter we had previously. We had lots of honey in our managed colonies, so theres no doubt that unmanaged colonies may have had even more stores. Little of this was used up over the winter and when we came in to the early spring nectar flow in very early April, colonies quickly were full of fresh honey, very early in the year. It was the perfect trigger to induce swarming, subsequently making a great start to the beekeeping season.

Swarm traps, all you need to know, click here!!

I deployed nearly 40 traps last year and as the year before my success rate was just under half at about 45%  success, which i was pleased with. The majority were in places I had previously trapped in and overall the quality was better than the year before but the overall size was slightly reduced. This I put down to early swarming, before brood laying comes to a maximum, in other words the queens were not laying at full capacity before swarming due to not enough room in the honey bound nests. I call a swarm of good quality, if it gets away well without the need for requeening. The 2013 season saw probably 30% of my recently trapped swarms try to requeen as soon as the current queen started to lay.

Now when I say swarms, I mean swarms that are from  "wild or Feral" colonies.   I believe that in North Brittany we do still have wild swarms, they may in fact, be feral colonies that have survived in a chimney or cavity of a tree but they still throw out swarms every now and again.  This is something I feel very sad  about, as over the next 2, 3 or 4 years we will, with out doubt,  loose these swarms that have at present, struggled through the problems with Varroa mite and its associated viruses.
The Asian hornet, Will probably  be the nail in the  nail in the coffin of wild colonies. An established Asian Hornets nest will go back again and again to where a food source is found, their nest will usually be high up in the canopy of the tallest tree , on the slope of the steep sided valleys we have, making detection of the nest very difficult, eradication , even more of a problem. I am not looking forward to that part of the forthcoming season!!!
I really don't see how a wild or feral colonie will be able to cope with this additional weakening of the nest, to a point where the nest just can't keep itself strong enough and  maintain itself.  Its such a shame, as its these colonies that have adapted to the diverse and changing  needs, kind of coped with varroa and still produce swarms. this also highlights how dynamic our bees are.
I will trap this year and probably next, as I want to document the decline (if thats the case). I know this sounds all very negative but unfortunately we cannot escape the fact that its a disaster for all out wild bee populations.
I will be doing an article on this problem in the next few months. Subscribe so you don't miss it!! 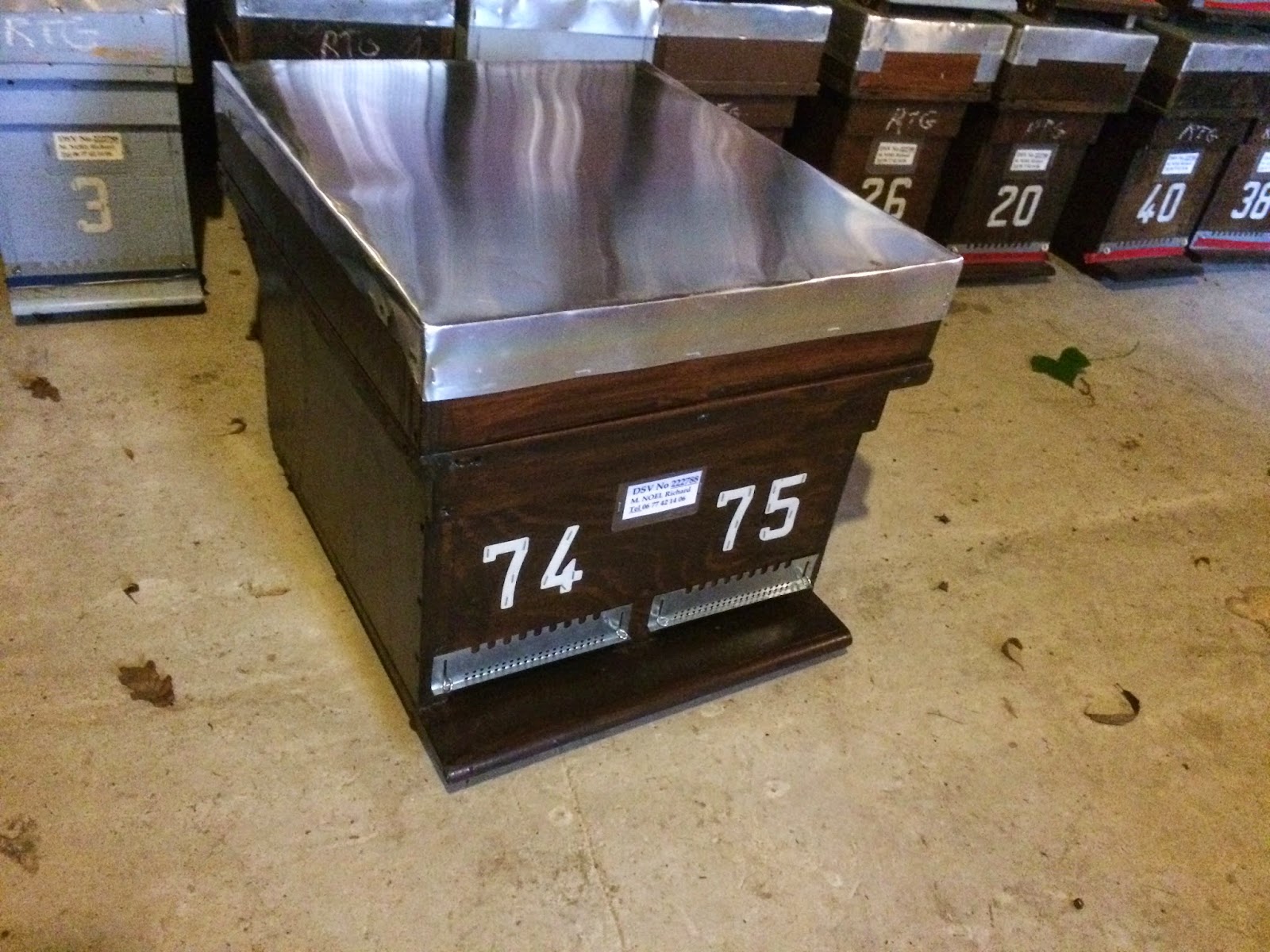 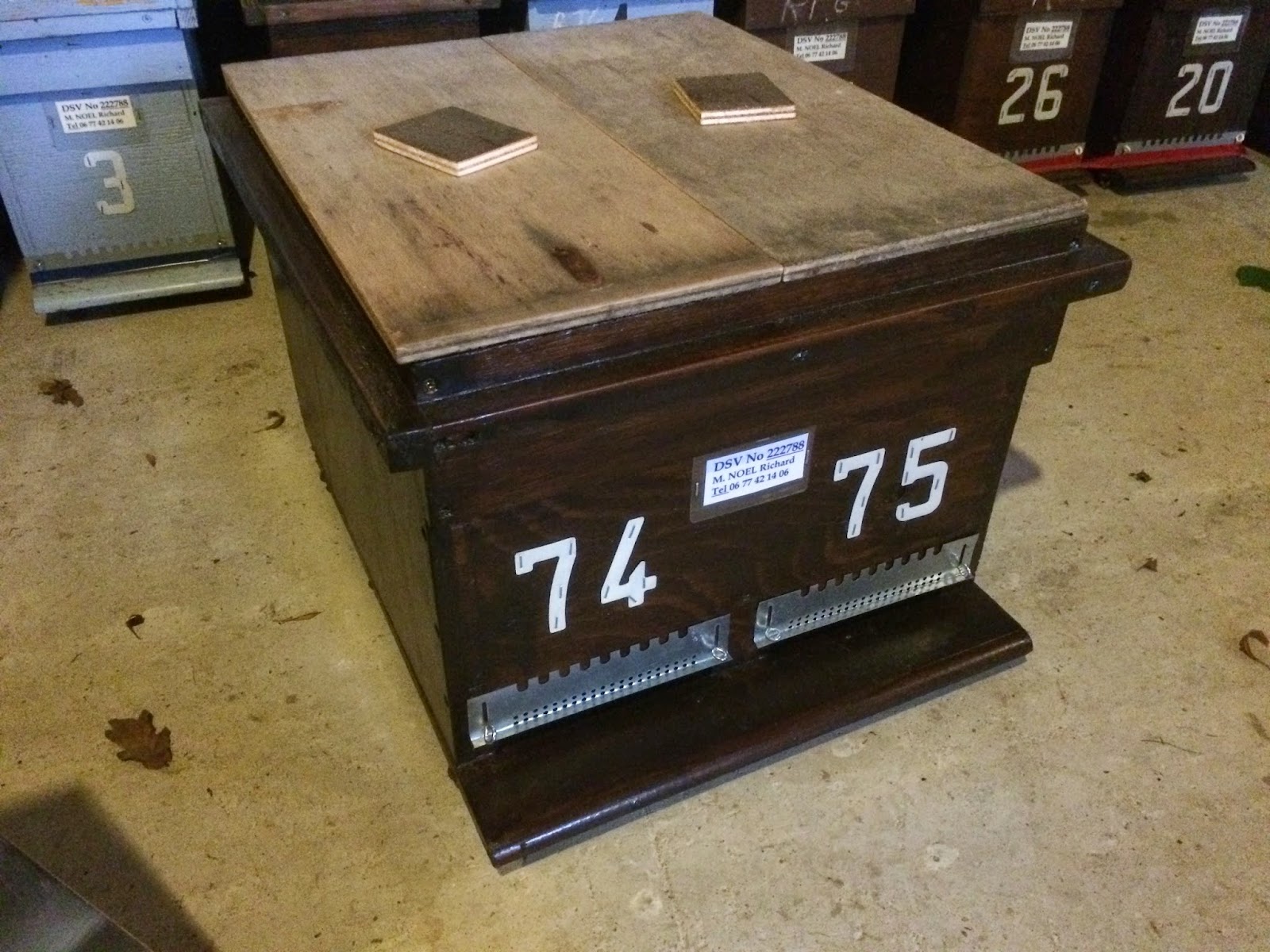 My first double nuc box is now completed, however I have found whilst building this, that I will make alterations to the design when the next is made.  I have realised that the thickness on the centre divider board is  the issue when the two share the same colony,  so to allow better heat transfer between the two colonies the thinner the division board, the better. This in turn creates problems as I want to add some supers to each side (individually) in the spring. With this  double nuc (pictured), I will just build two supers together that will just fit over the lower hive, but when I make my next set, I will be basically be putting two fully made nucs together and where they meet I will cut out the two whole wall sections and replace it with mesh on each side. This means that you can then make individual supers and also i will be able to inspect them individually afterwards, which was one of the reasons for going down this route. The division board will be 32mm wide, but the mesh will stop any problems with bees fighting and also mean theres plenty of room to place on subsequent supers.
Also to mention these supers are not for honey production, there are for brood and egg production. bees like to up, don't forget this! work with your bees, not against.


It's also a good time to re check your stored supers and frames against wax moth. With the recent cold weather things should have slowed down and any wax moth larvae doing any damage should be on a go slow  but that dosent mean it won't do any damage, be vigilant, come march when light levels and temperatures start to rise you could be massively disappointed when you discover wax moth infestations.

Theres so much to do over the winter months. I have been planning and expanding my apiary I have in a valley very near me. Its actually in a very small quarry where stone was once cut out of the hill side and in fact for me its just the perfect place to put my bees. Although it dosent get the sun until mid morning, it gets it the rest of the day, right up until sun set.
I had 7 colonies there in 2014 and they were all really strong, So I have spent time clearing the wild gorse and brambles to give me more space. I am fitting two more wracks, so potentially enough for another 15 colonies, but over all more space to move hives around as and when needed this is all investment, but will last a long time and really pay dividends during this coming spring.

Keep an eye on the weight of your overwintering hives. Knowing the weight is important but shucking a  few will give you an idea of whats going on. If you find one very light, then feed some candy to directly to the top of the  colonie, above the crown board. This will be taken down inbetween cold spells and  will offer emergency food if needed. A good sign is the visible old wax cappings dropping through the bottom of the hive and the bees start to consume their winter stores.
A colonie that dosent fly at all on a brief mild spell is probably a dead hive.
If your running a few hives, this will happen from time to time, so just make use of the resources it may leave. You will have the chance to clean out the hive in early spring, repaint it and give the frames to other weaker colonies. nothing is wasted.


Flowers at the moment are : 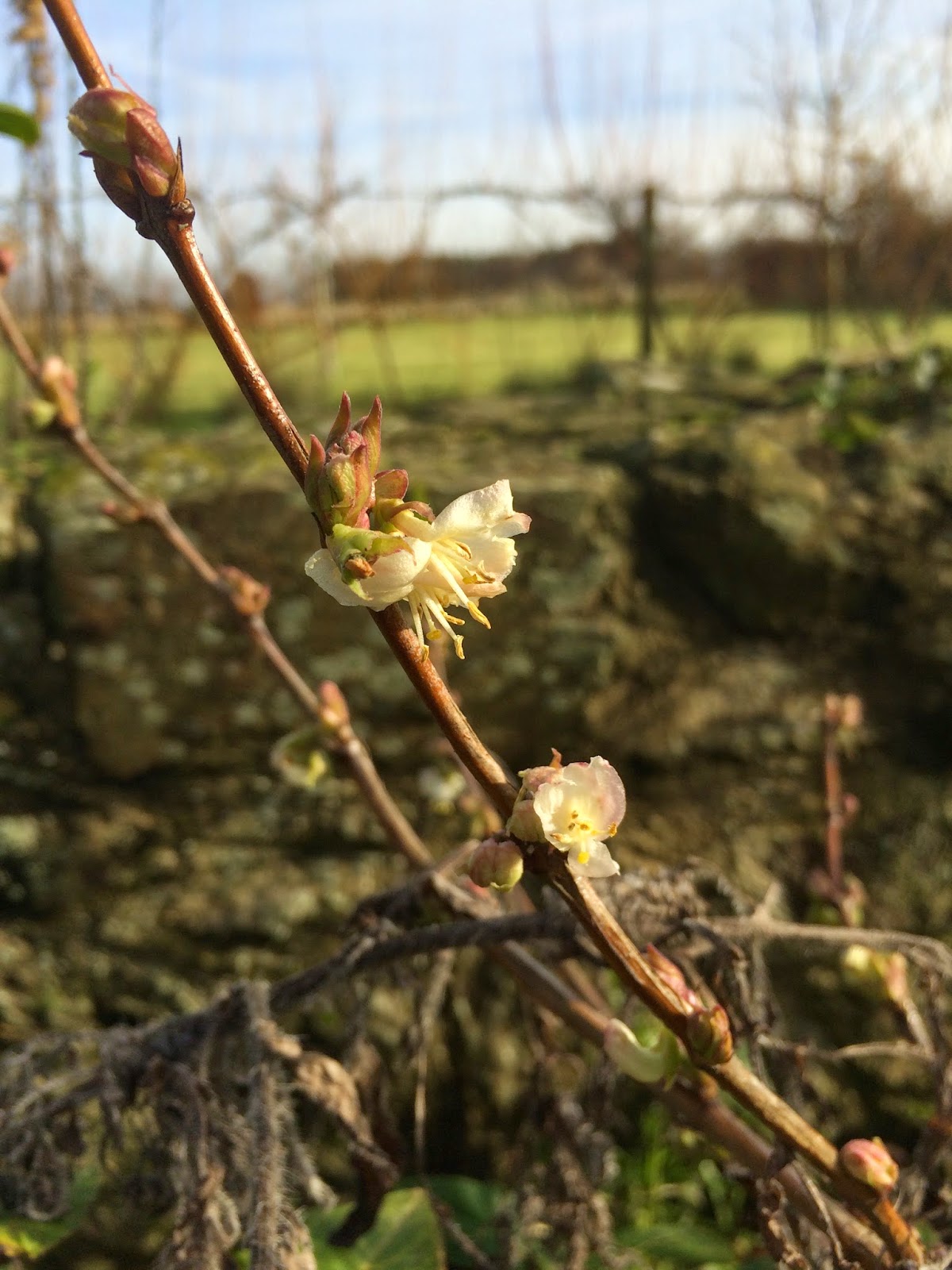 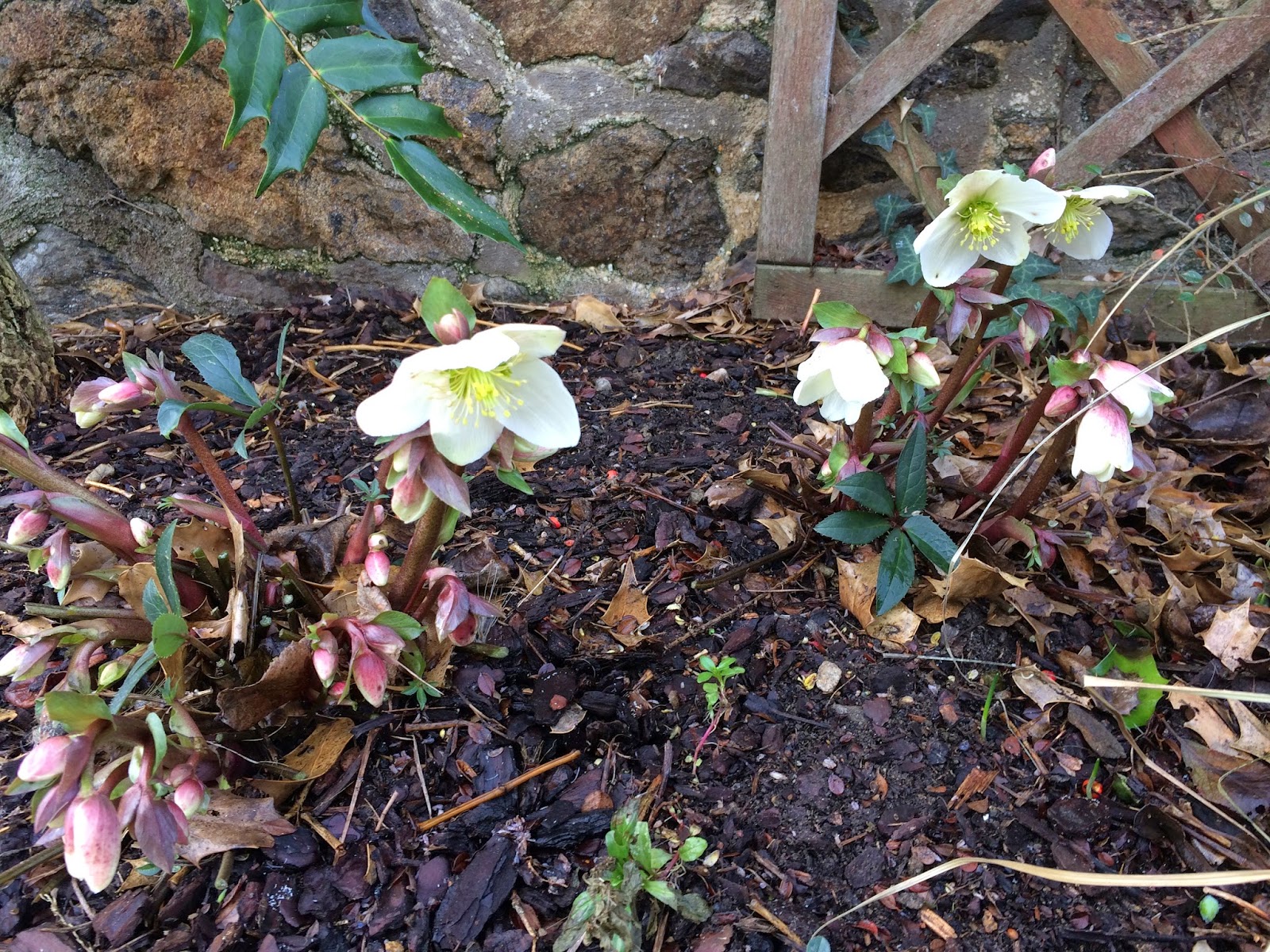 Of course the Camellia , Variety" blood of China", tons of pollen for bees! 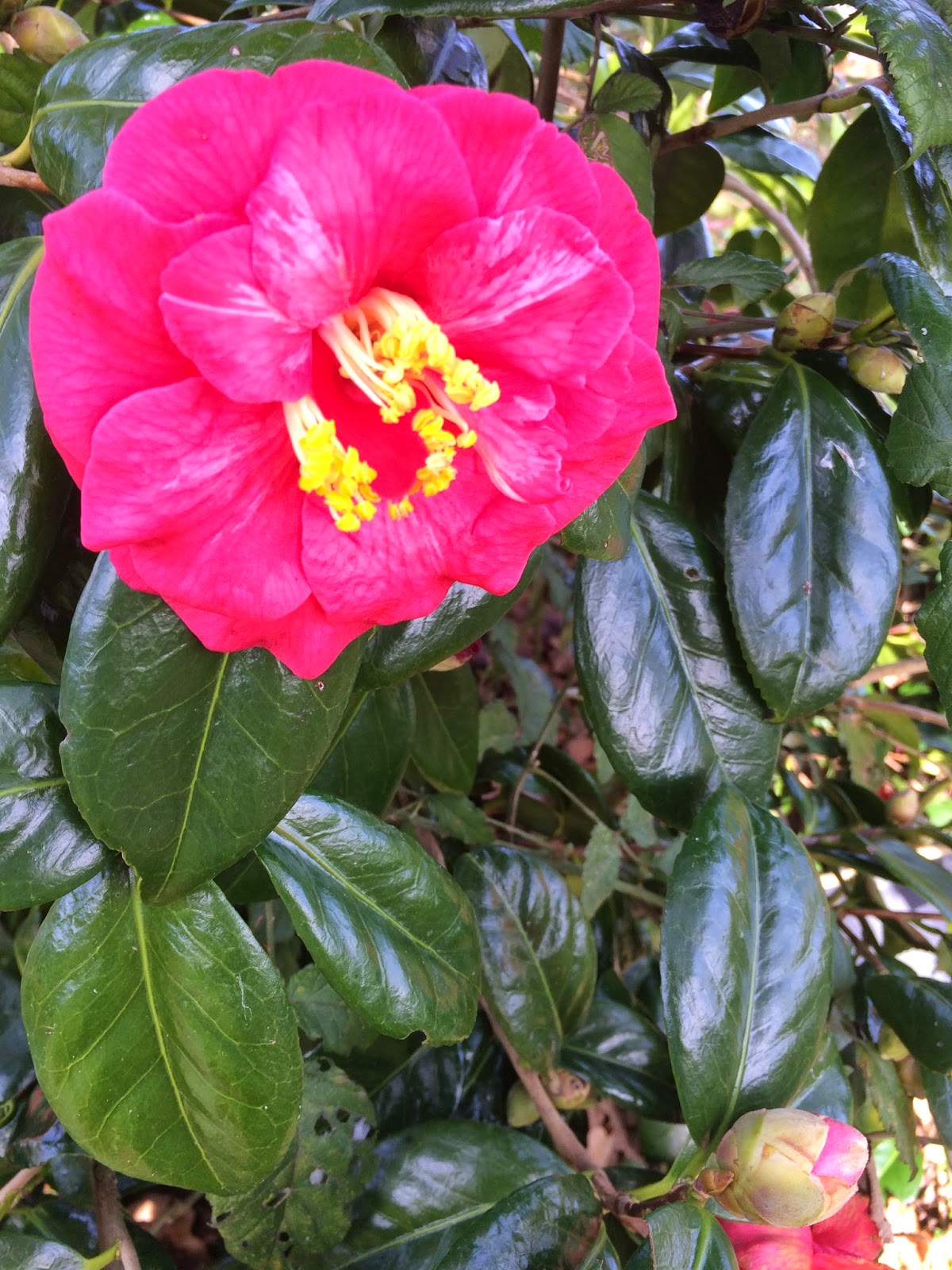 I am also starting a film on all the different types of plants, and trees that flower throughout the year, to highlight whats in flower and when in this particular part of the world. It will take all year to film but should be a lot of fun!!!!  after all, thats what beekeeping should be!!