With the weather cooling down I thought I would give my new vaporiser a go. I had  my buddy Alan to video the proceedings. It was about 7 degrees centigrade. Perfect conditions, with the breeze blowing from behind up, so all vapour blowing away from us!  Bees were much less grumpy this week as it was a little bit cooler. less of a welcoming party!!


Ok so if you want to buy one of these its on sale by mailing www.thebeebusiness.co.uk

I think it was about £80 including p and p  so as far as i am concerned its money well very well spent.
I treated the first half of my hives last week and i didnt remove the wooen tray i inserted under the hive and to my great surprise the mite count was teriffic! and thats only after the first treatment.
If you zoom in on the pictures you can even see the mites feet! Cracking pic i thought. It is worth saying too that i could have covered over the hive entrance once more. after removing the vaporiser, and waited aother couple of minutes, but i think in general, its pretty efective!
Thanks to Alan for doing the video!


You can see the mites very clearly. They are the shiny black/red dots. 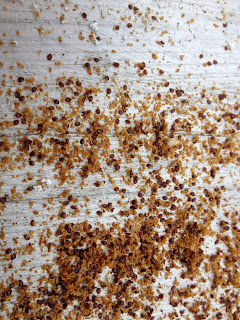 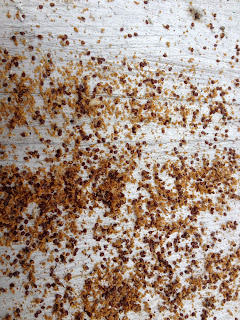 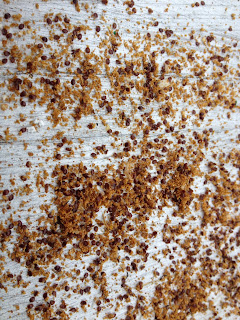 Posted by Richard Noel at 7:50 PM No comments:

The season started of very badly, with what can only be described as the most apalling March on record. Blizzards for 3 days during the first week, when usually you should be thinking about carrying out your first inspection, however the year setled down and a few middle to small sized swarms were cast from late may onwards. It wasnt until be actually got in to mid june, when the weather went good and the high nectar levels started to boost the populations in the hive and minimise space that i saw good sized swarms going in to my traps.

During the period from late june to the end of july i trapped 12 swarms, all of very good quality and vigor. Typically many of my traps looked as though they already had taken up residence but after careful inspection, you soon realised there was no bees in the hive at the end of the evening making is almost possible to predict that a swarm wold soon arrive. I missed the exact time but arrived at this swarm trap a few minutes later to see the remaining body of bees entering this trap, that had had scout bees present from about 5 days before.

A wonderful site to see on a fantastic morning.
I put out 30 traps baited with at least 2 good frames in each, plus propolis, lemon grass oil and nasanov pheromone.
In total for the season i caught 13 swarms, with the vast majority being caught during the decent spell of weather between june and the 3rd week of july.
For the first time ever, i caught two swarms in the sameplace and well apart in time terms, so both swarms, more than likely, would have originated from different sources.
if i saw a fair amount of activity form scout bees i wouldagain bait the nuc with extra lemon grass oil. I found it increased the activity of the bees. Certainly seemed to help!
Weather
Theres no doubt the fantastic weather during the summer swarming season made our hives stronger this year. Swarms were very vigorous, absolutly stunk of chestnut tree nectar after colonising a trap and filled out frames with increased  speed. For the final 4 weeks of the peak nectar flow, every swarm was good to above average size and they were colonising traps in places that i was trying for a second time, after catching no swarms there in the previous year, proving my point that you have to patient, watch your trapsand try one lace for at least 2 years to be in with a chance.
In one trap trap, checked some 3 days before with no scout bees around and in its second year of deployment,  a very large swarm arrived and colonised the trap, filling all 5 frames in less than 2days. I was worried that this swarm would abscond because there was too much congestion in the trap, a massive nectar flow, very dry, sheltered position in full sun all day during a heatwave, forcing a permanent fannng party circulate air through the hive all day. Many bees continuously on the front landing strip, with the hive minging of chestnut nectar. I may consider fitting some vents to the rear of the swarm traps that could remain shut during the attraction stage but oppened up if a large swarm occupys the box.
I also learned that if i misted some water over the front landing strip, this encouraged most of the bees to go back in to the hive, before fitting the front door for transportation and when i mean mist, i mean fery fine water dropplets just blowing in the wind to mimic a foggy evening or drizzle.
Summary
In short, an excellent year good sunshine makes a massive difference! My personal best year in terms of swarms and honey. I had a great time in learning new techniques and trying out different things.
Already making inquiries about trapping for next year. It will soon come around!
We have now had the end of the ivy nectar flow and the tempeatures are starting to climb down to daily highs of single figures. we do need some cooler weather now. I have nerly made up my first 100 replacement frames for a new load of hives i have orderd, in plank form. All i have to do then is cut them up in to the four sections, screw them together and then paint them.
I will hopefully need them by the end of march if my overwintering nucs survive!
Start your winter beekeping as soon as you can!
Posted by Richard Noel at 10:59 PM No comments: