So heres my first mating nuc I  made up, a few more to follow. Short video, going through various points!


Not that difficult to make,  just  a bit time consuming and fiddly, but should last a very long time. I have used what I have , So I have used my standard sized dadant frames and cut them down.
I can't see any reason why they won't work! 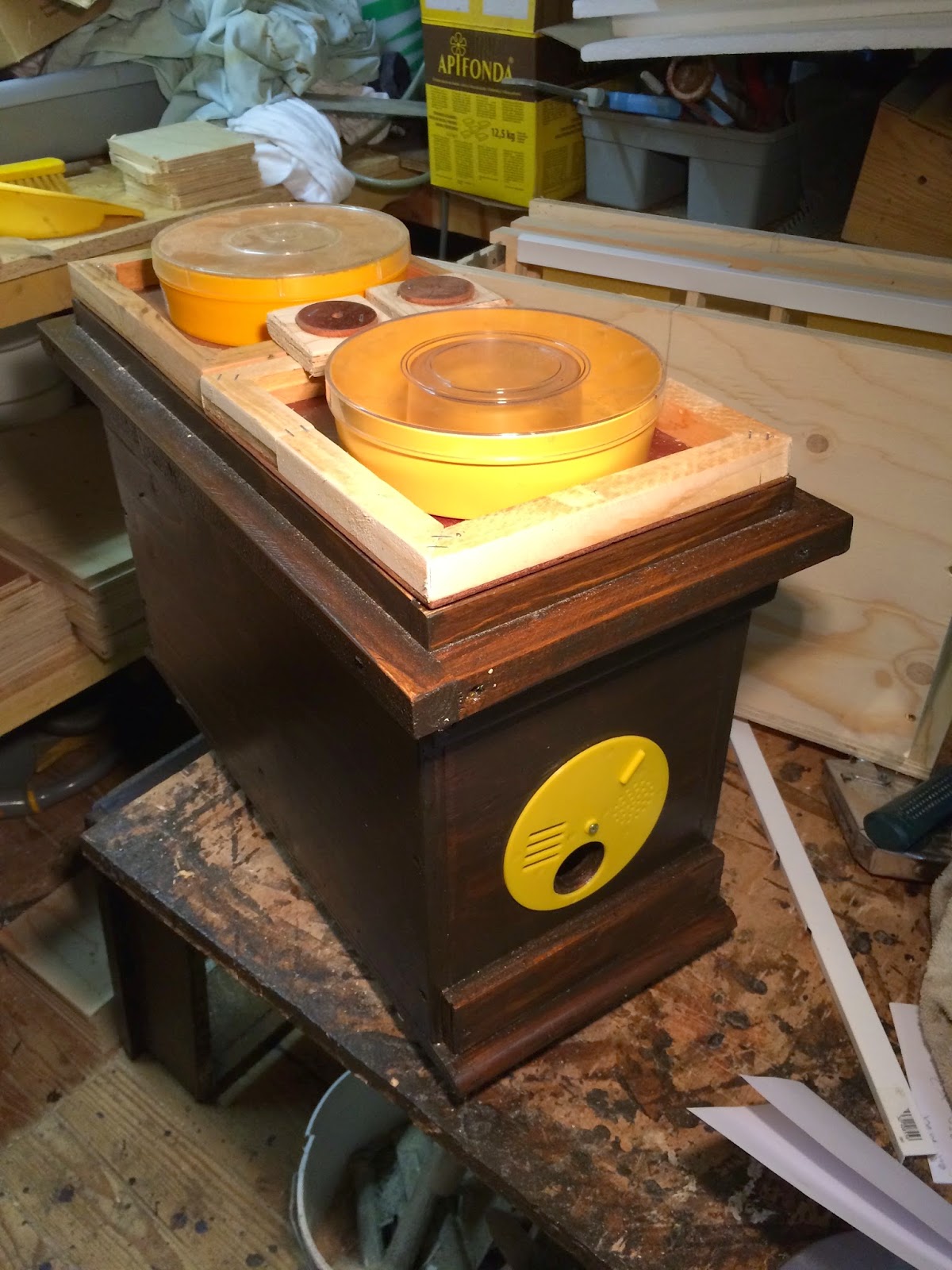 I have made an adapter bar so I can put these small frames in to a standard sized Nuc box and get the bees to draw up the frames Let them do the work!!.  I was lucky enough to find a piece of ready made plastic frame at my local DIY shop. This makes things very easy, sure they will probably build between the frames between that gap, but if they draw out the rest then I can harvest this and insert it in to the new mating box, usually made up the day before the queens are harvested from your cell building colonies. This will leave them queen less overnight and may also help them accept another queen cell.
I will be looking for  frame or two  of honey , two or three of brood and one undrawn. This will mean theres plenty of hatching brood to keep the colony strong until the queen starts to lay. Then I will have to watch the colonies that they don't get too big (congested). I might even have to harvest brood and bees if i don't need a queen and if they get too strong,  or i can  simply make a new colony using the resources of two or three nucs! 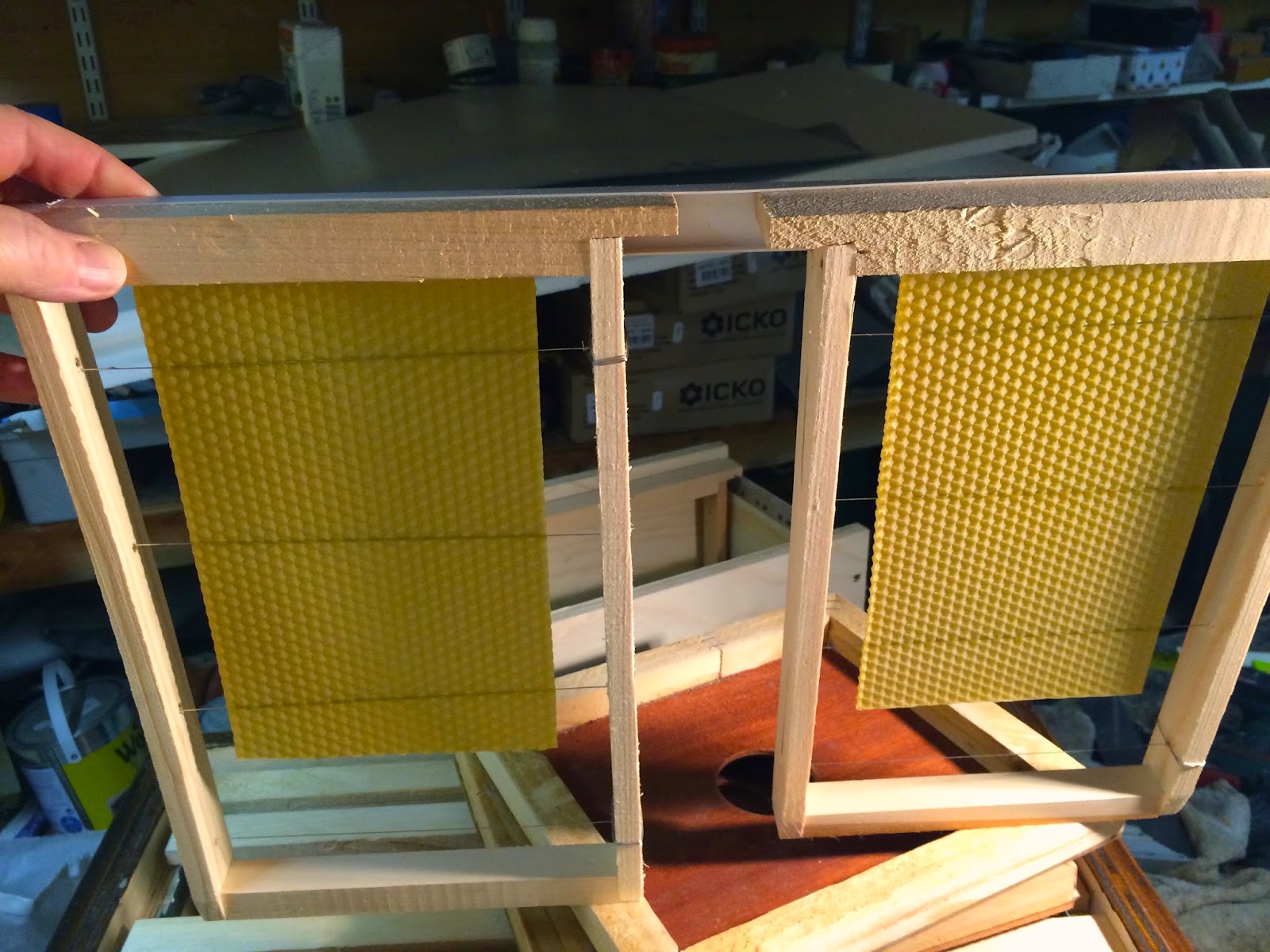 The plastic frame adapter that joint the two frames together. 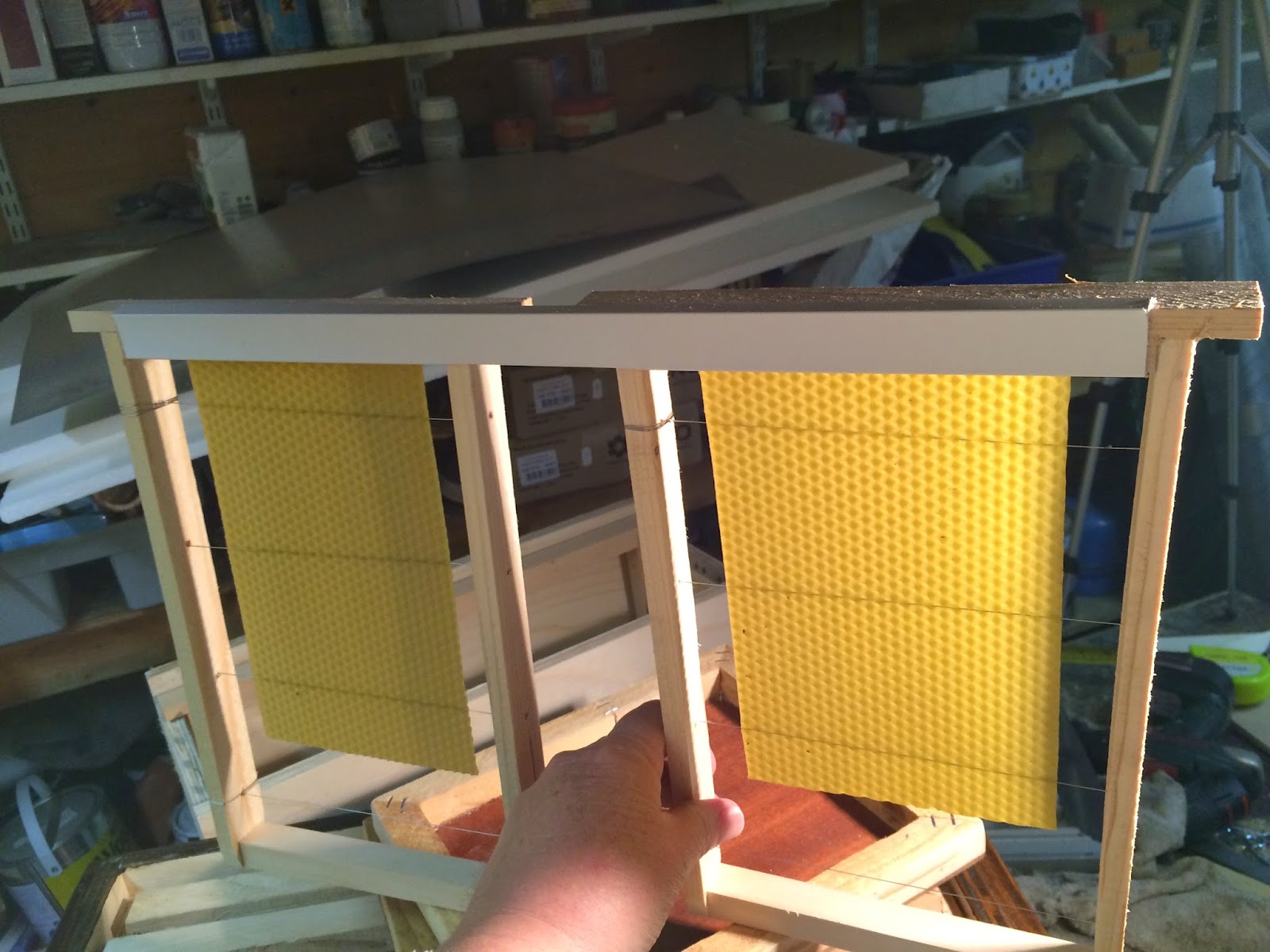 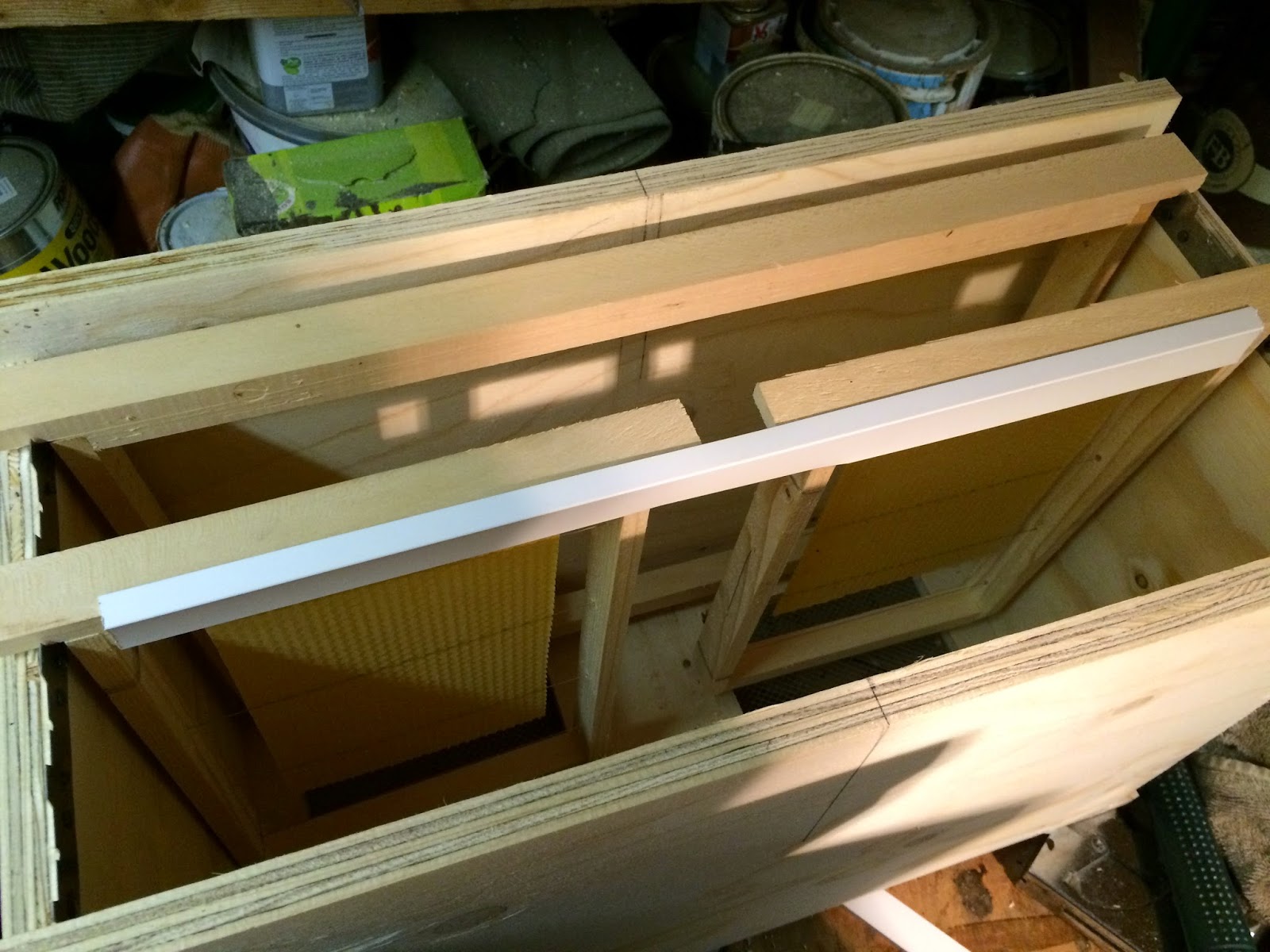 Two internal shots of the interior of the mating nuc.
you can see I have tried to use up all the small bits of ply I had in the shed, by making the frame support and bottom frame holders. You can see there is a gap between the two, which the bees may build in to but thats the cost of trying to economise but needs must! 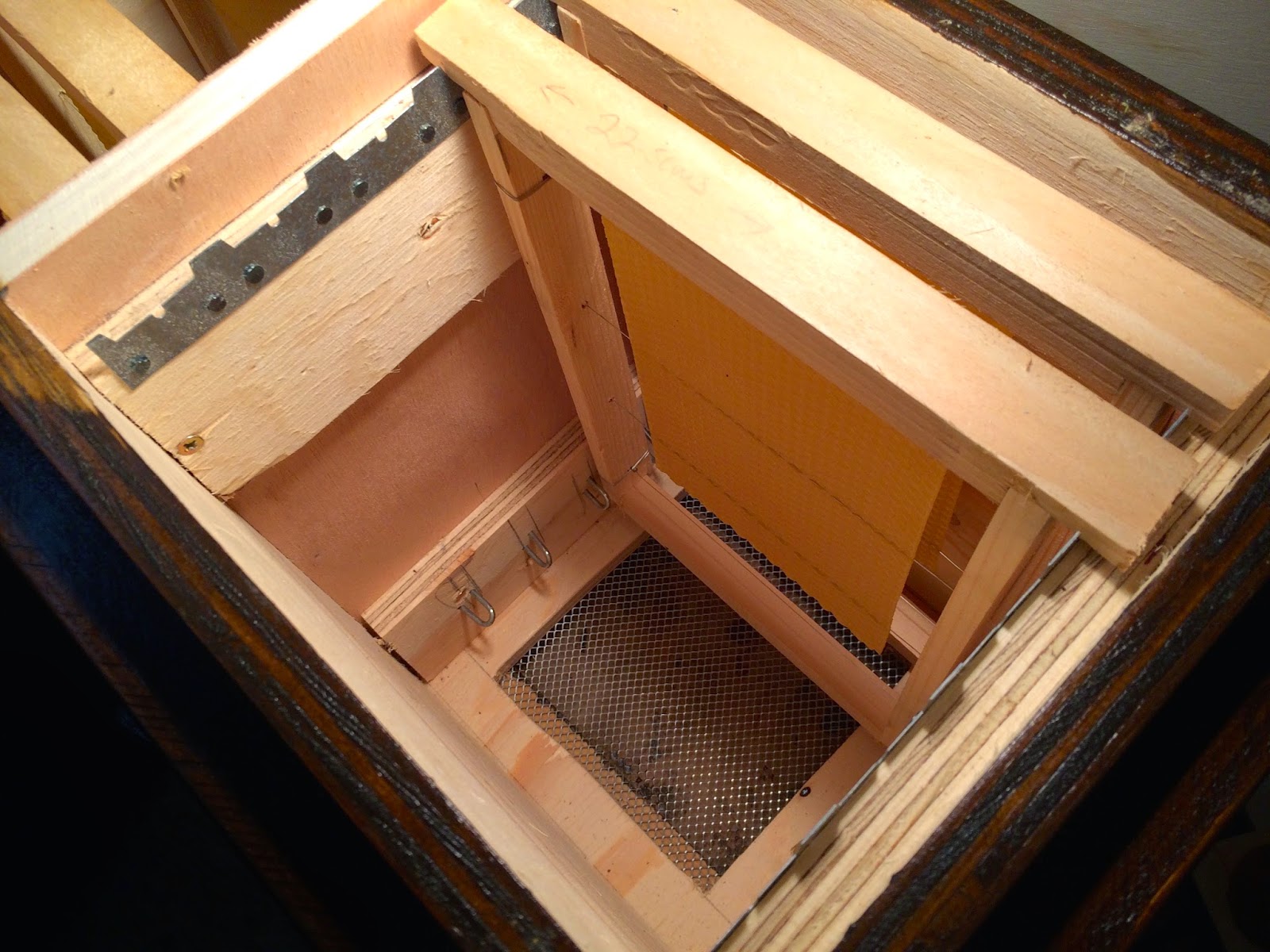 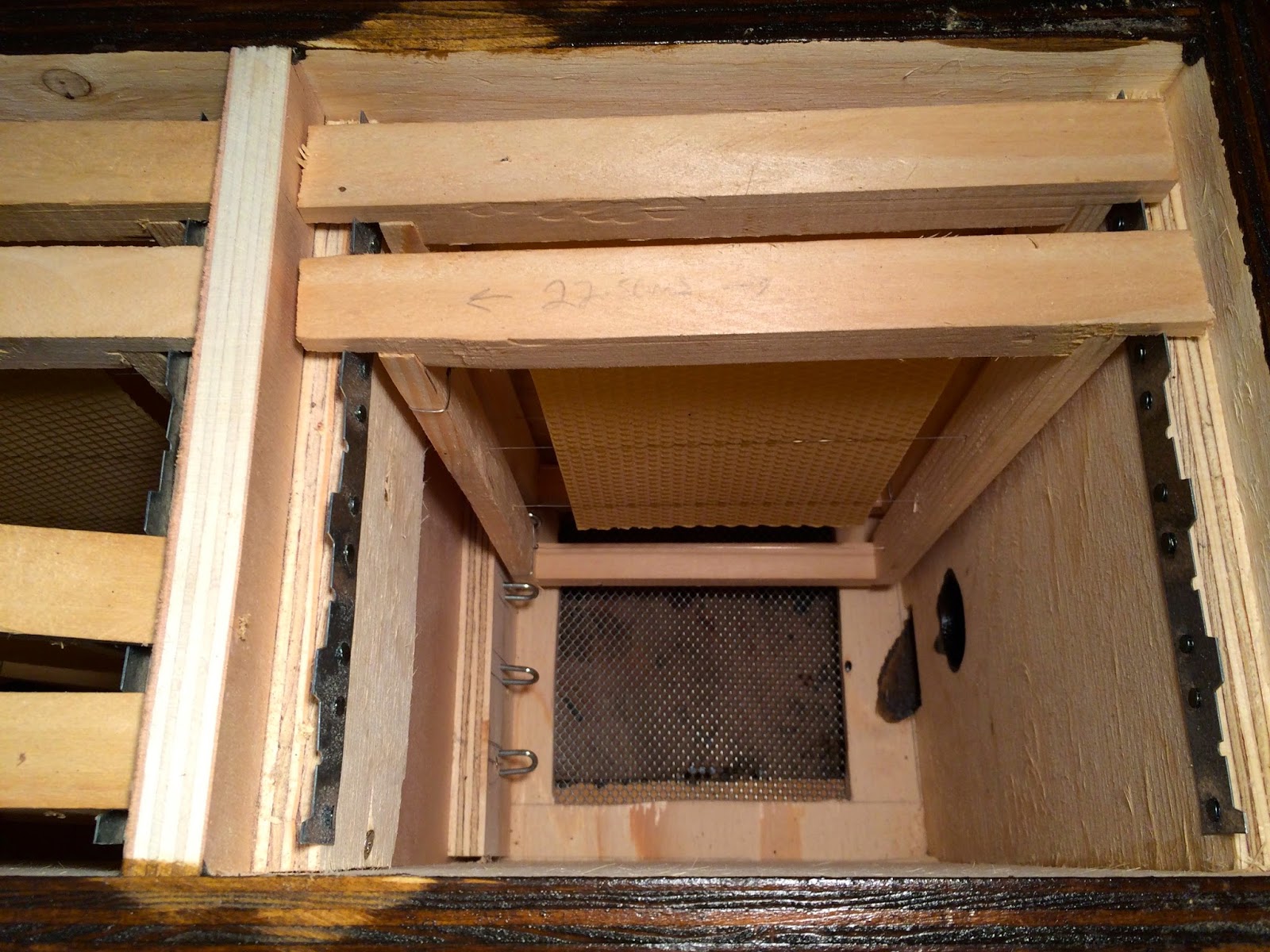 You can see the entrance and exit to the bottom right , painted brown. Front viewing showing the circular entrance disc, which I got on eBay, from Simon the beekeeper, good immediate service. 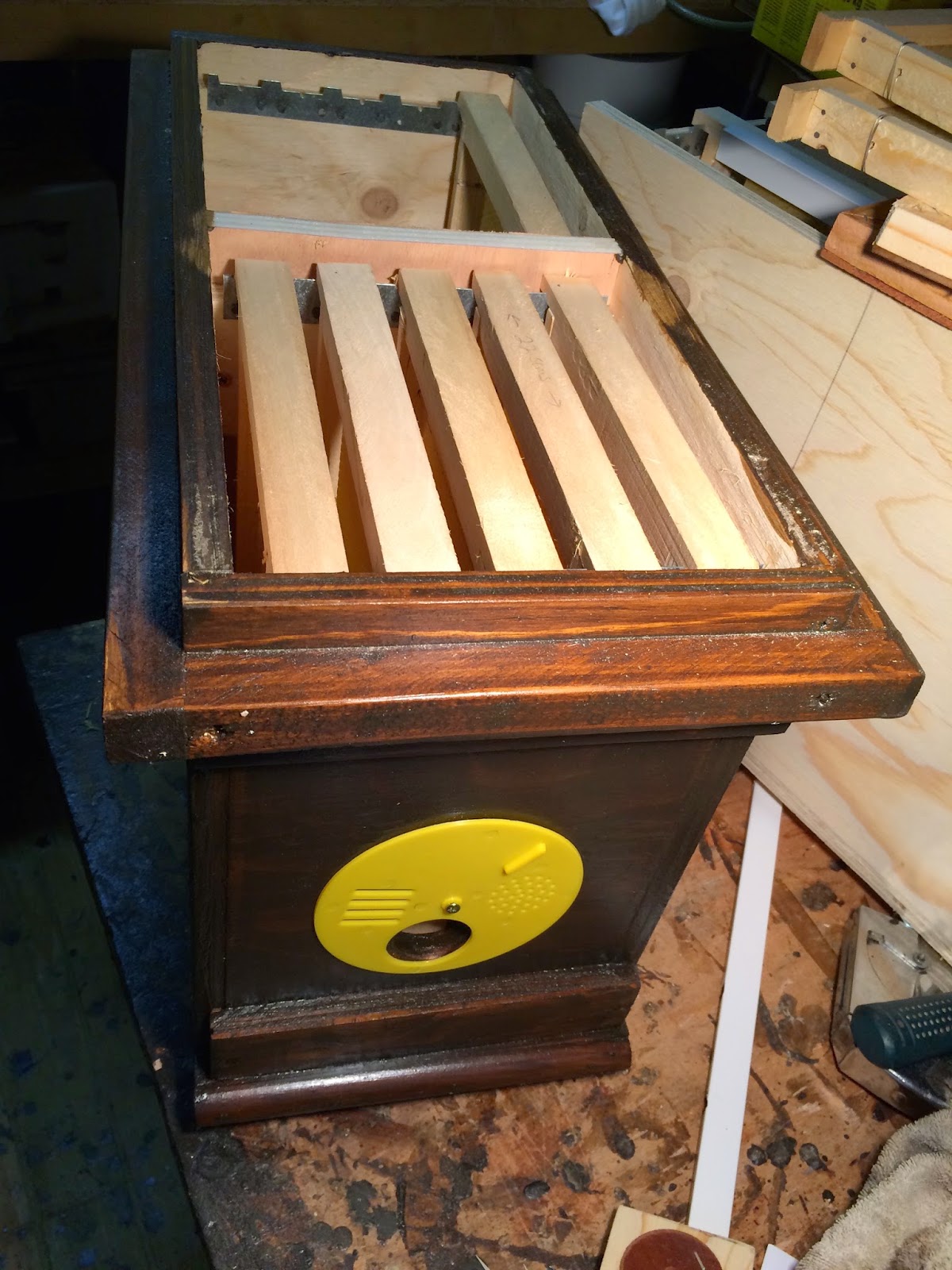 I wanted to have larger than average mating nucs because I am not on a time scale to sell these onwards, only to produce the best queens, so I can requeen all of my own stock if necessary. This larger  mating nuc will also buy me time so they won't abscond or swarm before if i am a few days behind in swarm prevention and stock management (I hope) . However if anyone needs a queen I hope to be in the position to help out from mid may onwards!! Just hollow!!

Would recommend to everyone to read Brother Adams "queen introduction."
He maintains that queen acceptance during substitution is mainly because of the condition of the queen and her laying condition. If a queen is not mature when she is taken from a nuc box and is not laying well this behavioural difference will be noted by the new carers in her substitution ( when she may be balled and rejected) , so make sure your substituting a mature queen in the place of an old one. The subject is fascinating and well worth a read.

Didn't want to feed my nucs a large bags of sugar candy, so instead I have put it in to old butter pots, taking about a quarter of the original sized packet. This can be neatly inverted on top of the open hole on top of the colony, where they can take this directly if they so wish. This is only going to be given to colonies that are light on stores. Next year i want to weigh all my colonies dry, then with a full colony in depleted in stores,  then full of stores so come autumn next year should be easier to ascertain their needs!!
I can always give them more if need be later in the winter, its far from over yet. 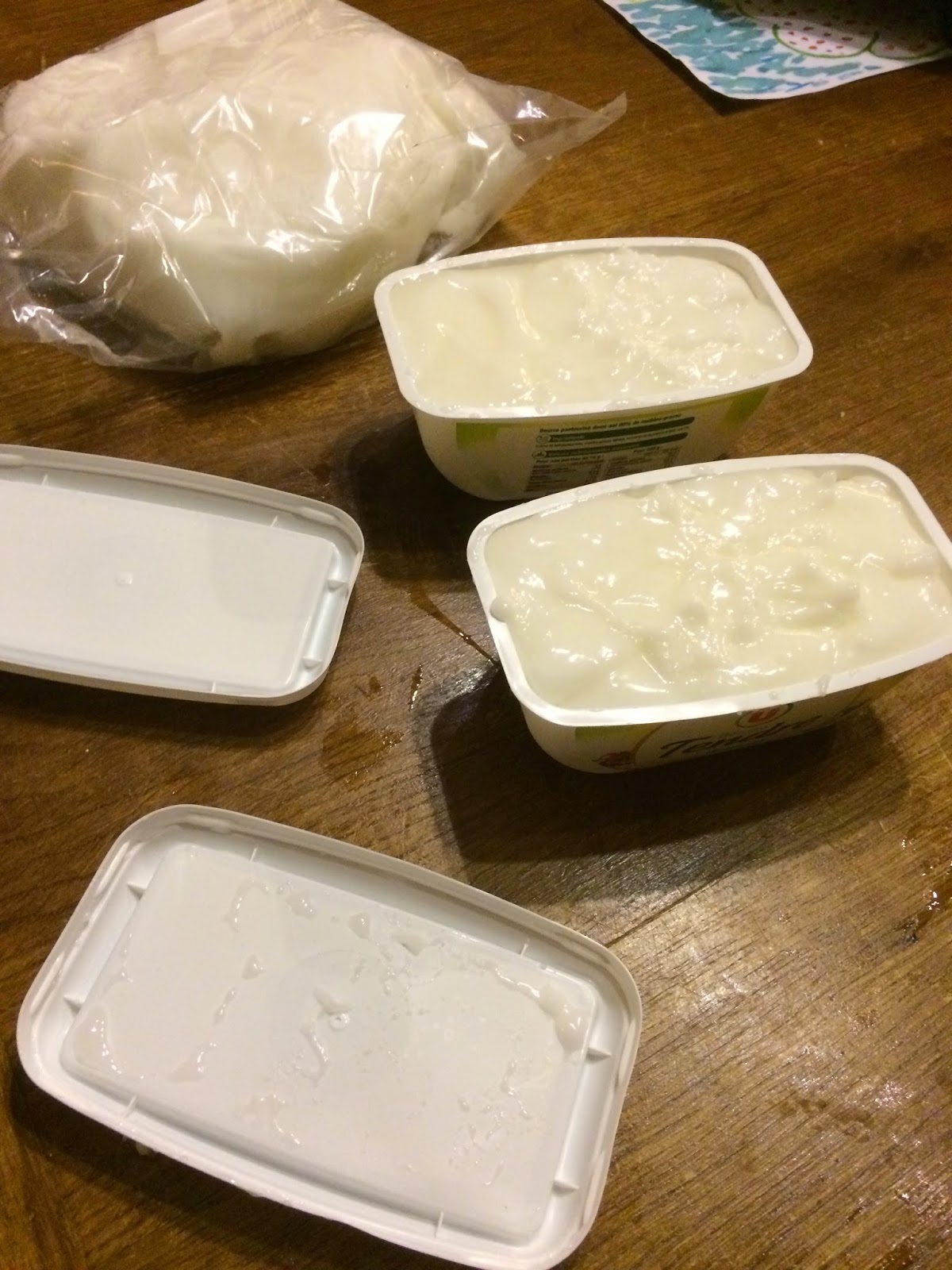 So if you haven't got a Nuc readyor a  spare yet or a spare hive,  go and either make one of pick one up!!! you will need it!!

Enjoy the quieter months and use your time wisely!!