Already November, what a great end to the season its been!!


I won't go on about how fantastic the Nation Honey Show was for me!! (we'll i will a bit then) But indeed it was a truly great experience.  Great speakers and also a very useful afternoon workshop on bee diseases and their identification and a great bit of shopping in the trade hall One day just wasn't long enough!!
Picked up a lovely new smock top, with a round bee veil. Hopefully I won't get stung at the back of the neck now ! www.bbwear.co.uk
Also picked up 10 extra feeders, at a fraction of the cost, From Maismore apiaries www.bees-online.co.uk

Also found "mannlake" www.mannlake.co.uk     They had all the small things that others didn't!!


Great books too! bought a couple I could have bought another twenty !! Northern bee books  www.northernbeebooks.co.uk  Their range is impressive to say the least!! 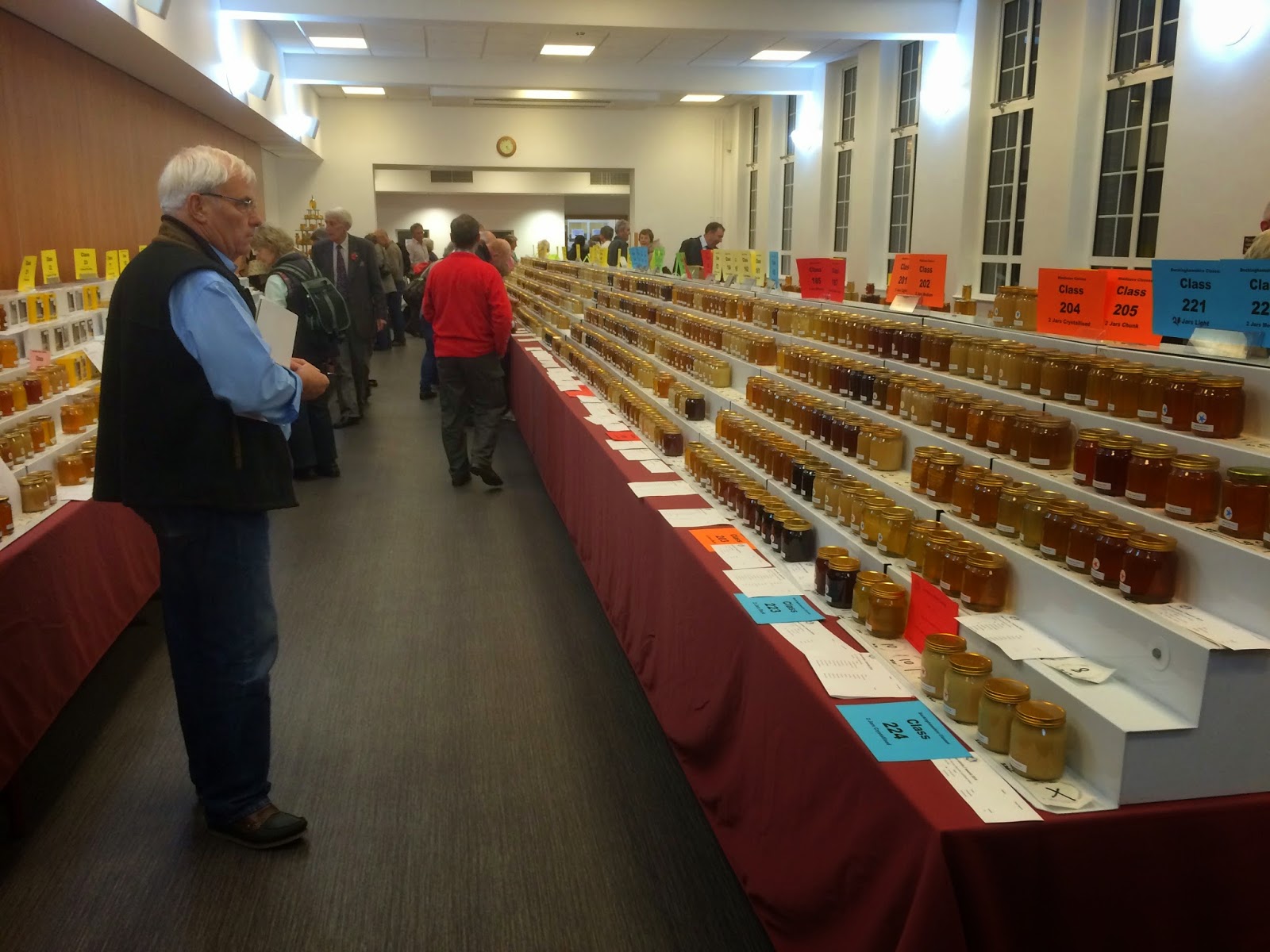 Well what a great end to the season too.  The incredible Ivy flow has just about finished (here in Brittany), still some plants with a little on but it must have been in flower for nearly 6 weeks!! and yes i am banging on about ivy a lot, because its such an under valued flower at a time of year when theres really not much else around. I also want to make the point that this year the Ivy gave us a flow, A real strong flow!! Its a great example of what can be achieved by our dynamic bees in the right conditions. I  have learnt a huge amount from this autumn!!

Just before I went away, I  finished sorting out my nucs, transferring colonies in to ventilated Nucs for the winter and sorting out a couple of drone laying worker colonies, that were weak, so I moved them to adjacent nucs and mixed the bees that were remaining with colonies that were queen right.
As a result I have a few extra frames that will come in extremely handy next year, in my traps and in my cell builder for queen rearing.

There was a little honey in a few of the frames but i have washed that out, so if i put the frames in a trap they don't attract mice, wasps or hornets!


I have found a way of washing out the honey, simply with fine rose or jets from a multi head kitchen tap, warm to hot water and a lot of patience. It has to be said that this is a lot of work to get the frames clean, but these frames to me are priceless and you just can't buy these, no one will sell you them!! I certainly wouldn't. With out these its unlikely you will catch many swarms! The first pic is before being cleaned, the second is cleaned. 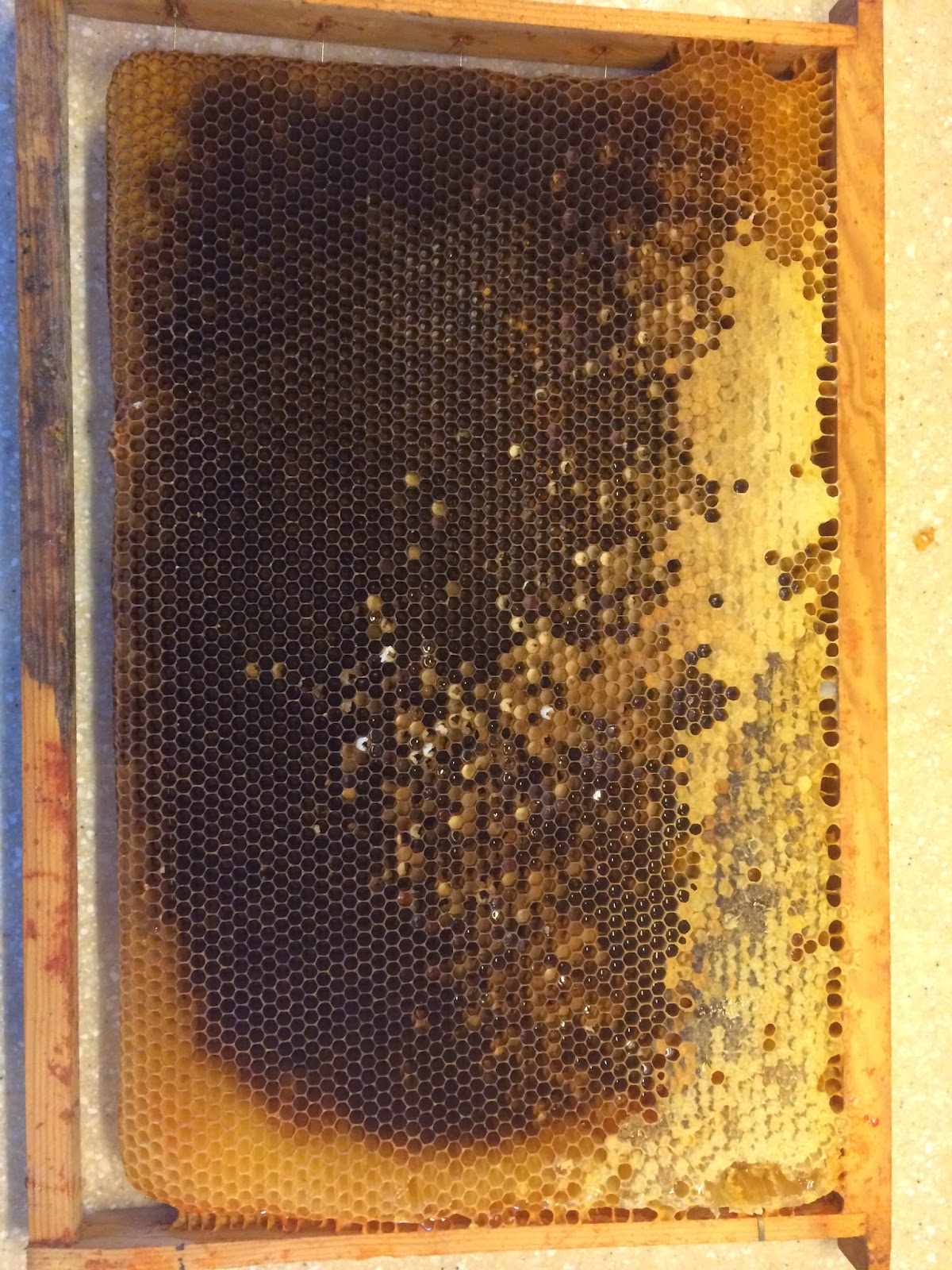 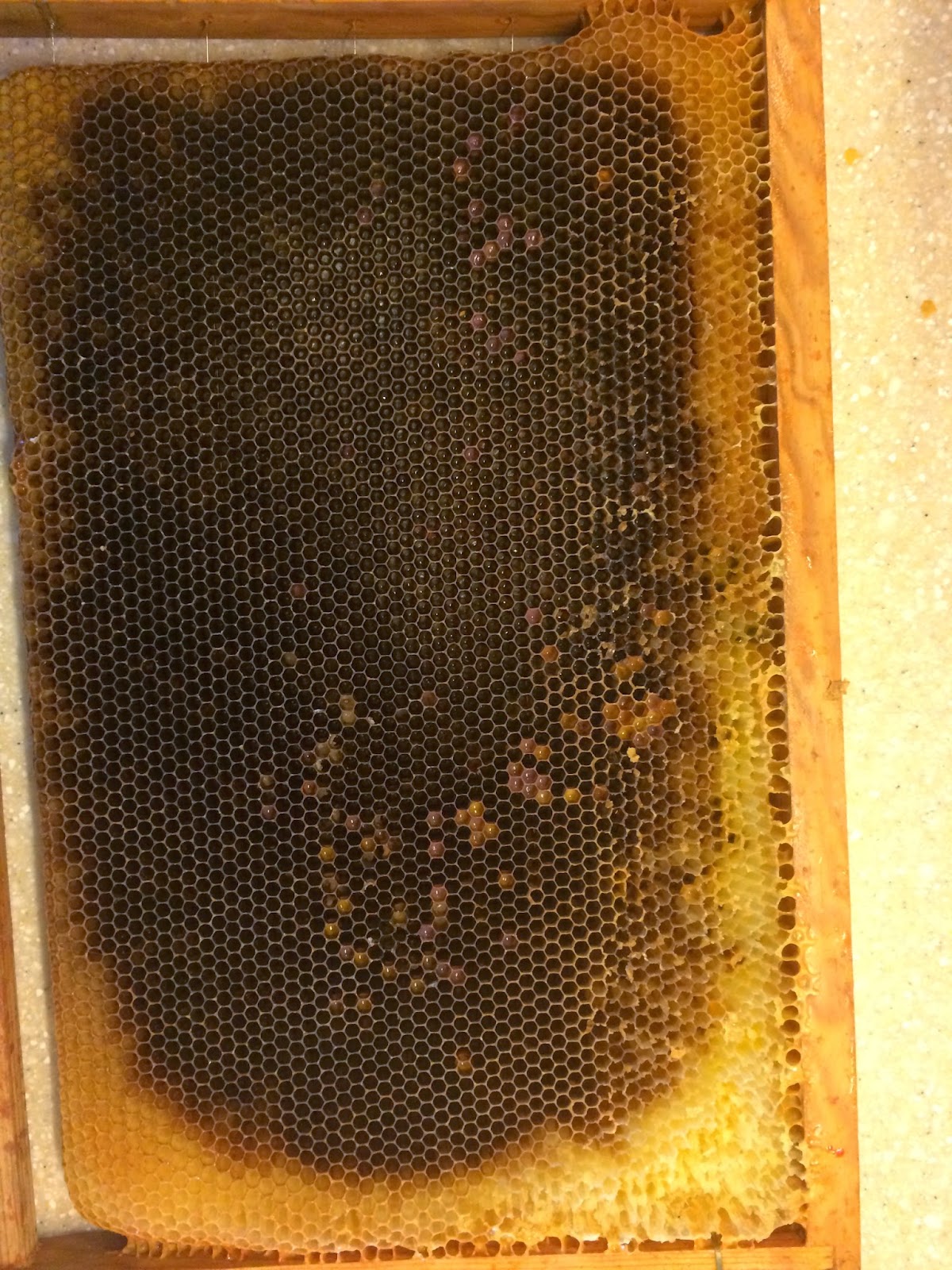 So you are also probable asking, why waste a bit of honey, well that a good question. If the frame was more than a third full of honey on one side, then i usually keep them to give to a weak colony, or an artificial swarm next year. Less than that, I bite the bullet and clean them up. I am pretty sure that following last septembers very generous flow, I am going not going to have many empty frames in my hives next spring. So I am capitalising on the few spare frames I have now and putting them in to reserve now!
Three years ago we opened up our hives and the frames we usually remove (number 1 and 10) were completely honey bound in March, I feel its going to be the same this coming spring, Unless we get some serious periods of cold and warm in-between. I can't see our bees using up all the frames of stores. Time will tell.

The death of the drones! 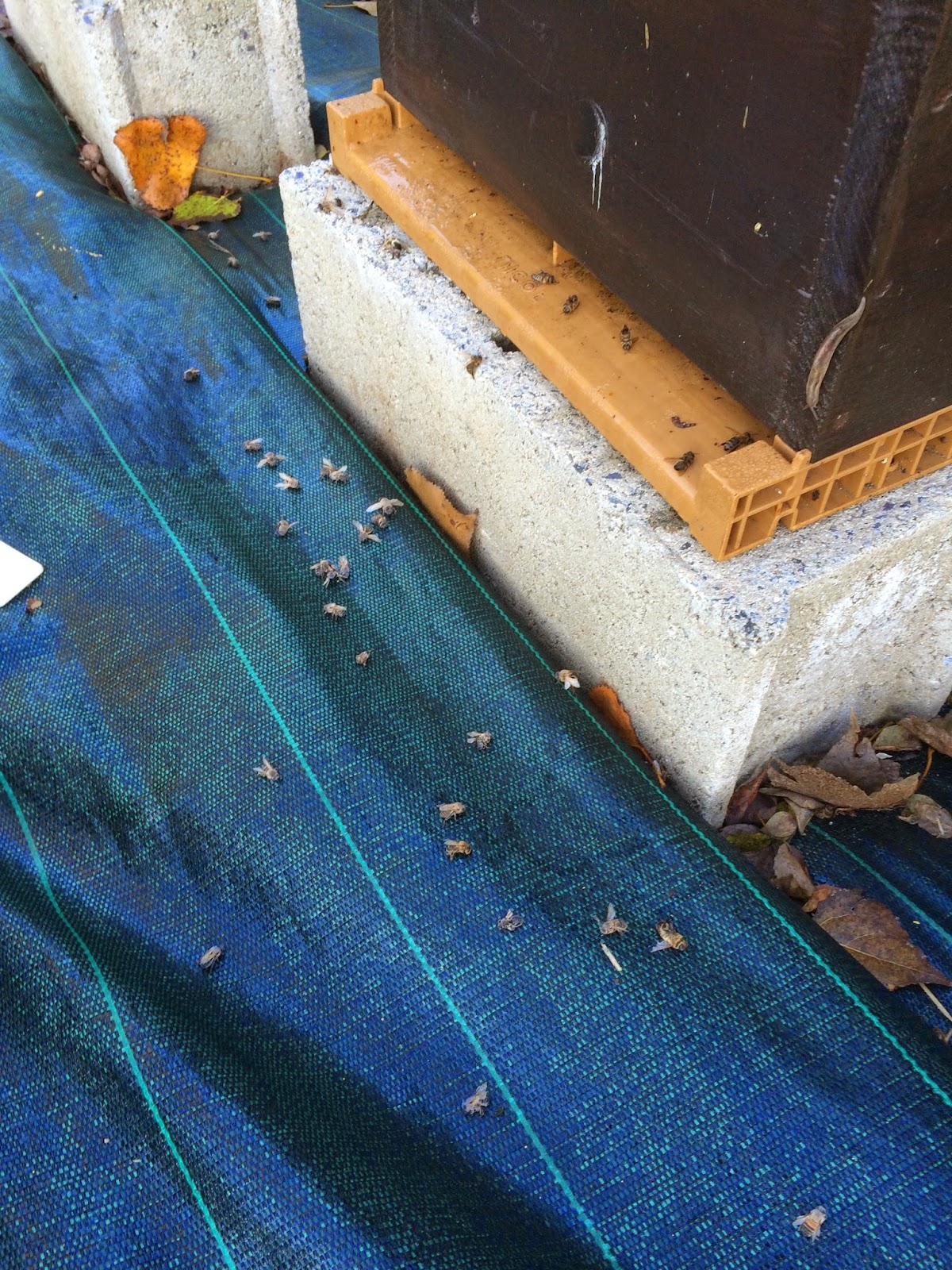 The eviction has well and truly started! Queens are booting out the un economic drones, their job is done for another year. Colonies are also doing hygienic cleaning and removing any diseased workers or remaining bees with parasitic mite syndrome!! Don't worry about this , its all good news!

The long range forecast (according to the experts) is for really cold weather to start mid December and it could continue in to March! Phew, if so thats great. We need a good spell of cold, shrubs are in flower that should'nt start for two months yet. cold and dry, bring it on!! 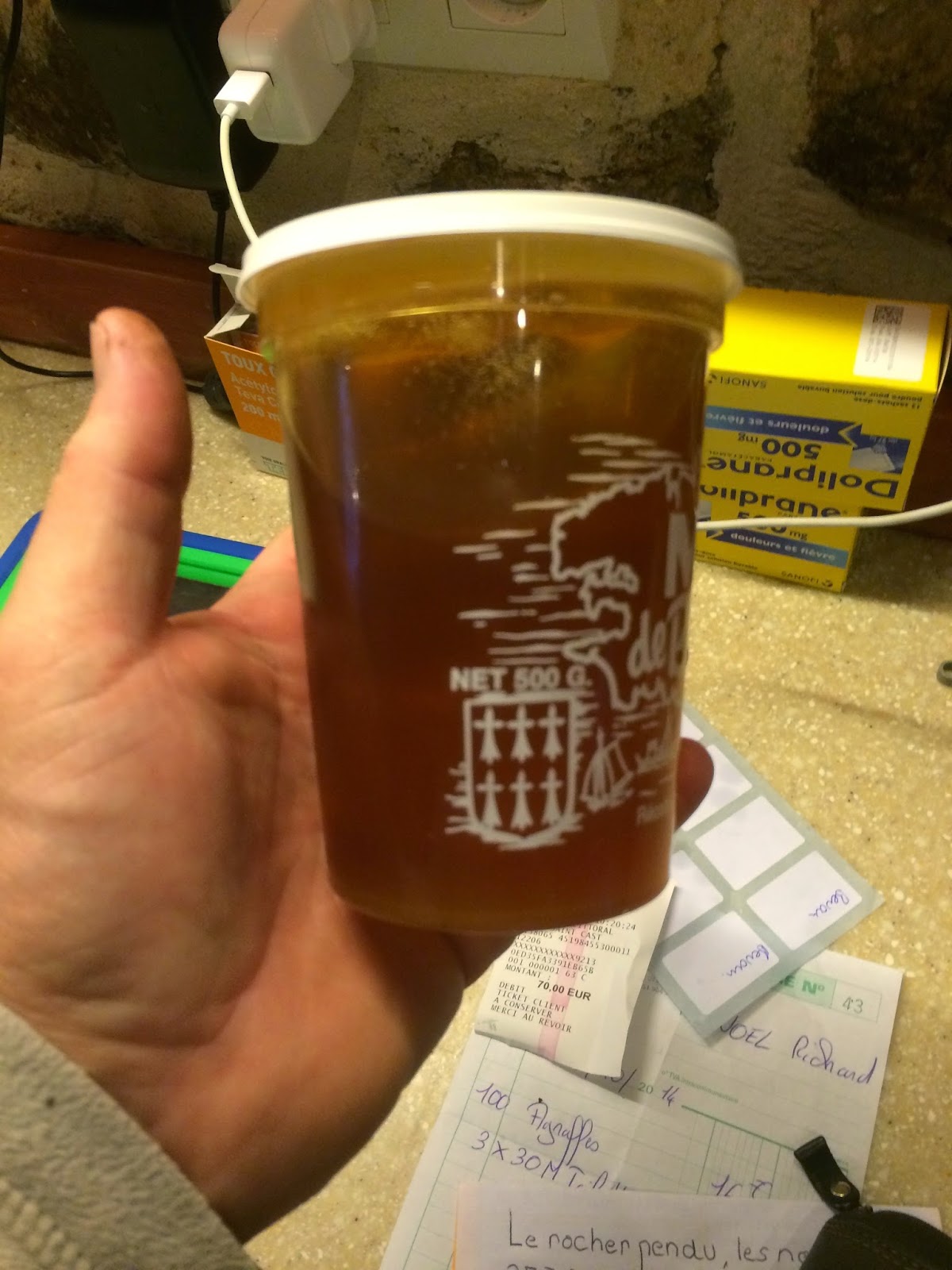 I am really enjoying my honey this year and I nearly cry when I go to the supermarket and wonder how they are allowed to stock poor quality imports that are more than likely full of American Foul Brood spores!! Its one of the two main ways of how this dreadful disease is spread.
I personally think our local honey, and to that , all local honeys are massively undervalued!!
Its just sooooo good!!