Its all coming together nicely!

Apart from my stupidity in not rocognising a very lightweight hive,  things seem to be going well.
We all  make mistakes and this one cost me the hive contents. During what I described as a recent dearth before the main nectar flow started, I moved my hives to a valley where there is an abundance of chestnut trees, but failed to act on a very light hive in time to save it. One unusually cold night and the result was catastrophic for the colony. Probably 25,000 dead in one night.  It was certainly starvation as there was not a drop of honey in the hive and no gradual weakening over days. All other hives adjacent very strong so i can rule out poisoning! well that will be in my diary for next year.

Still the hive did give me an artificial swarm  (split) and i made use of the 10 drawn u frames in my taps. Like always with beekeeping, you loose in some areas and gain in others. 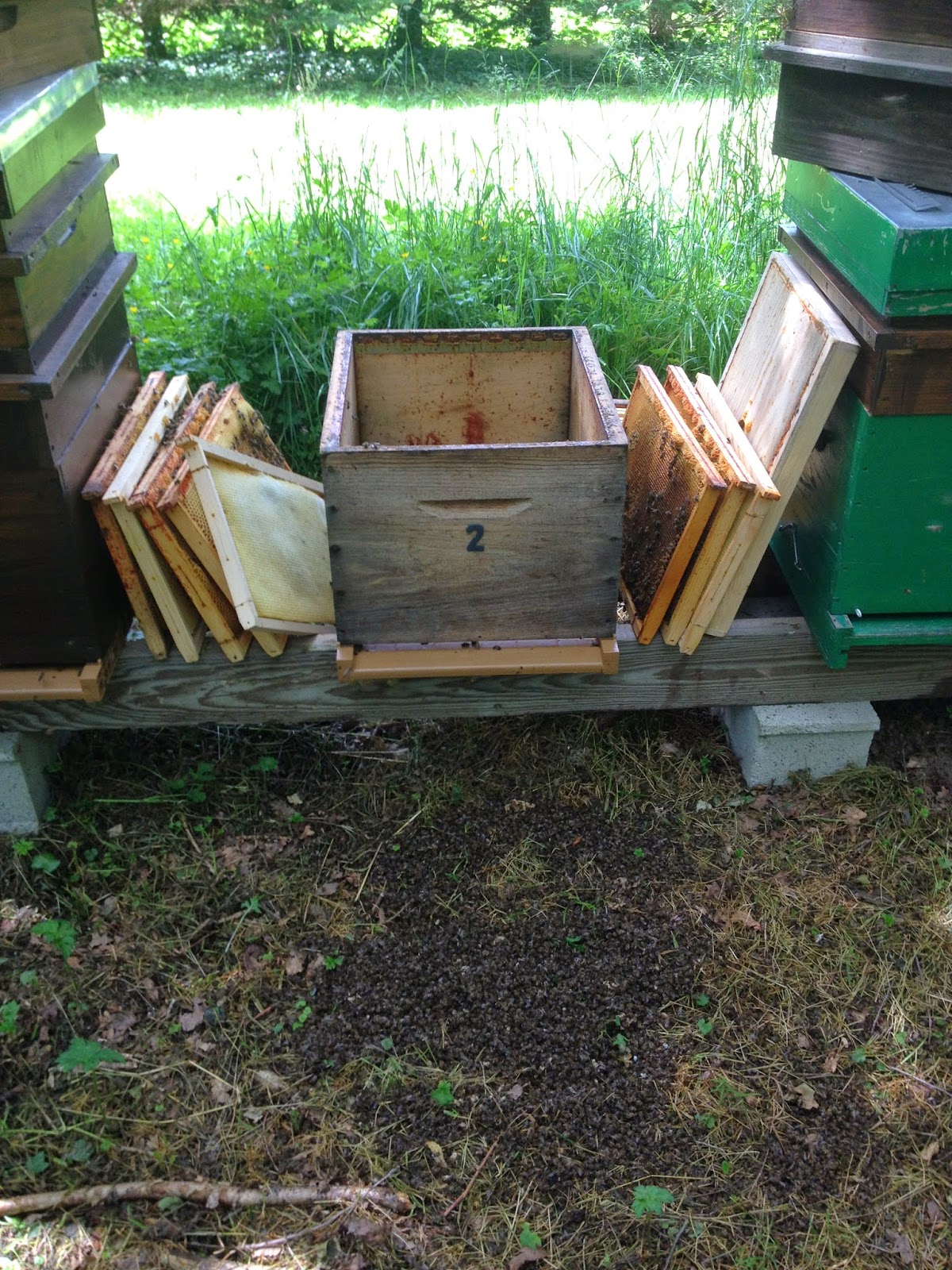 Bramble, clover and of course the chestnut trees are in full flower. The glorious stink of chestnut emminating from the hives is reasuring that all colonies are getting what they need. Full nectar flow means happy bees and hives full of honey. Honey supers should be on all hives now and queen excluders should be cleaned and stored away until next spring. The summer honey  allows a late harvest and all brood (mostly drone) layed in to the upper parts of the hive ( the supers) will mostly hatch out and be replaced by honey, by the end of august, just in time for the harvest, but abpve all the queen has the freedom of the hive to organise more honey storage and brood production, so she is much less lilely to swarm. \Theres also a good arguement that shes already starting to prepare for the coming dearth , before the onset of autumn, depressing though it might be, it wont be far away!!
It is a waste of time putting on a honey super after the middle of july, as its the end of the main nectar flow and the end of the swarming season. 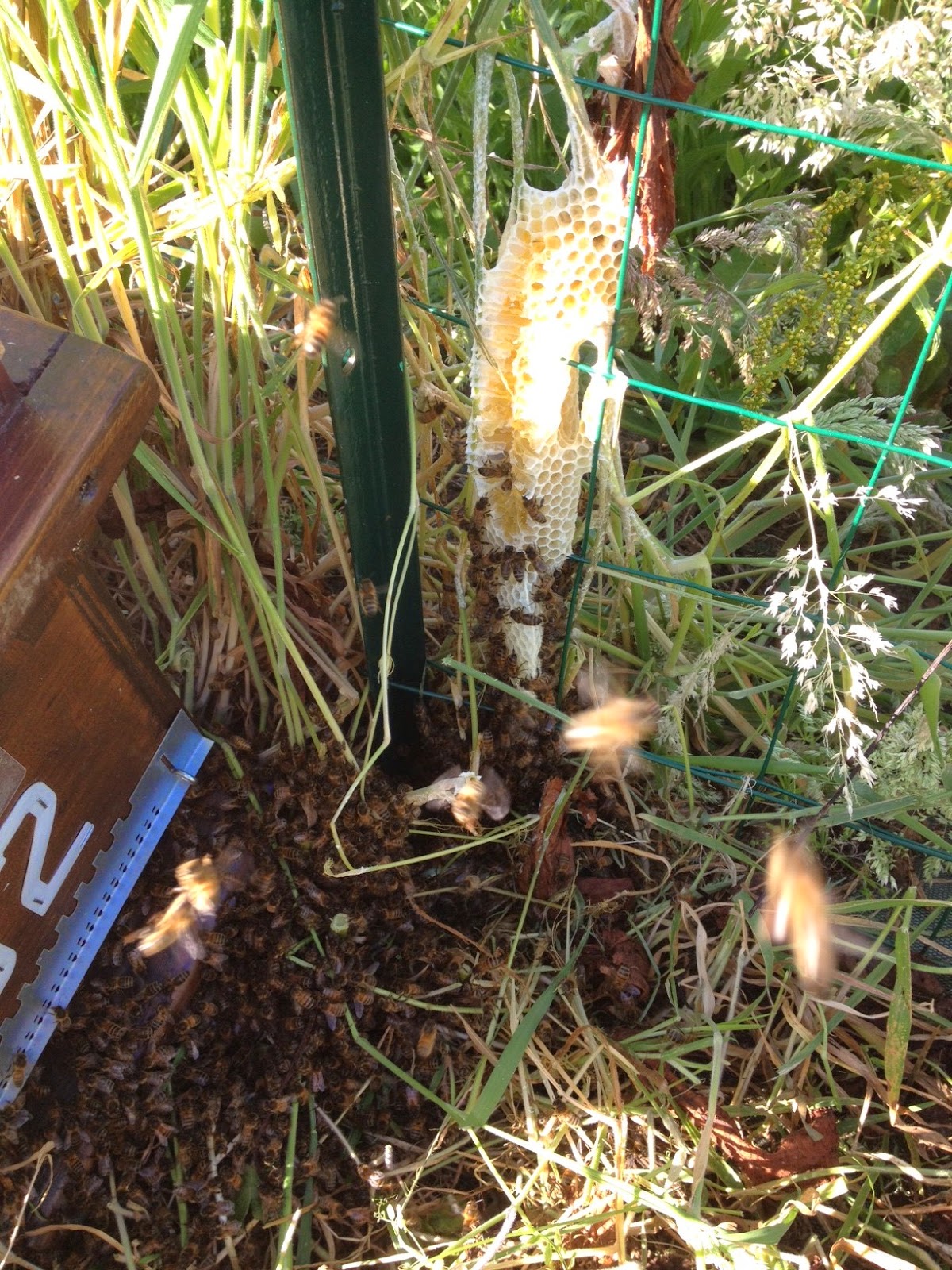 This swarm had been on this garden fence for probably four days and had built comb in to the fence. we managed to get most of the bees off, so we then were able to remove the comb and remarkably the bees just walked off the fence, in to the new hive we placed on the floor just adjacent. Its almost as if they were pleased of their new accomodation. The colony has a very small queen that appears to be laying well, so fingers crossed. Thanks again Alan, it was a rather nasty ditch, that was full of nettles that you managed to climb up, while i stood the other side of the fence, as you smoked them across.

Another person that called me, said they had the remains of a small swarm in their vegetable patch that had mostly disipated to elsewhere, so i put a swarm trap out and he morning after  a swarm arrived and took up residence. Its just having enough traps and material thats the problem. You must have well used nucs, with well used frames in, if you want a realistic chance of success.


My swarm traps have worked well. Over the last week I have found another 6 swarms in my traps. they are all of varying sizes, some on all 5 frames and some on only two. The smaller ones however, seem to be laying just as quickly as the larger colonies. As soon as you see a few eggs you are reasured that that colony has a realisitc chance of making it through this coming winter, in to the next spring. If the queen fails for many reasons, mostly she just is worn out and exhausted, then as long as she has laid a few eggs to cement her dynasty, thats all a colony will need under the emergency response to successfuly flood a larvae with royal jelly, float out and extend a worker cell in to a beautiful queen cell.


So my plan is to keep as many swarms as possible in ventilated nucs for overwintering.
My criteria for this will be, for this year that they have queens from this years artificially swarming, as its a pretty sure thing that most swarms will contain queens that are probably from last year or more than likely the year before.  I cant be any more selective than that, as i havent at this stage chosen eggs to graft from that subsequently will give me better  selected characteristics and so on! you have to start somewhere.

This will give me a brood factory for next year, so i can make up a very strong hive for queen rearing, which in turn might give me better stronger queens, it will allow me to have a nuc, or a queen ready to transfer in to another hive at short notice. and also give brood or frames of eggs to weaker colonies.
The whole concept is so clear to me now and initially is a lot of work to set up but in the long term the results should help make better queens and stronger hives but from a much more sustainable source!!

I hope your Bees are working well, good forecast for the next few days, just when we need it. Enjoy!!