Artificial swarms before the dearth bites and an unusual home for a swarm!

In to the next phase


So, the nectar flow comes crashing to an end! The chestnut trees have well and truly finished, their catkins are falling.  Time to make artificial swarms   and make use of the high population of bees. 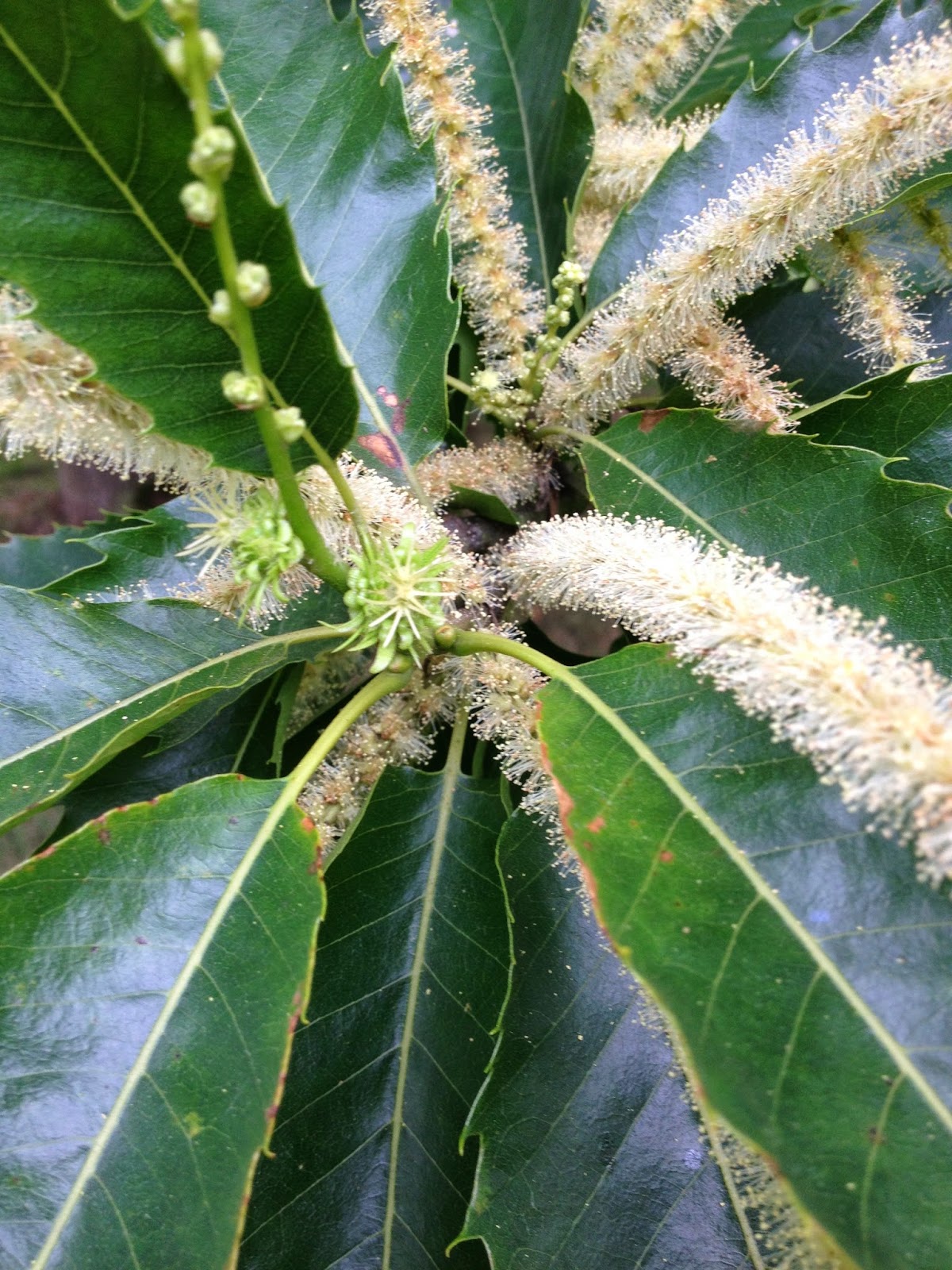 I have taken the decision to keep producing as many colonies as possible. All my strong hives from the  supposed honey hives were artificially swarmed, 10 in total as well as a few very early swarms that had made the criteria, so i have another load of nucs full of bees.

Full of bees they are indeed, the foragers returning came back to find their hive moved and just a nuc  or mini hive in its place.  Subsequently the bees go in to emergency queen cell production and will by now, have floated out a larvae that was less than 2 days old and flooded it with royal jelly to ensure it  turns in to a queen larvae, rather than a worker larvae. In another 13 to 14 days a virgin queen will emerge and claim the throne  for herself.
So when I selected  two frames from my mother colonies I selected one frame with eggs less than 2 days old and another with brood and pollen. This will give the nurse bees plenty of food to nourish the developing queens, prior to  metamorphosis and again after emergence.

Honey supers
So what about these if they are honey supers on the hives, well these get moved too.  Empty ones are removed, or frames juggled around to reduce the empty space in the hive. The bees might consume a little from these supers over the next four or five weeks prior to the harvest ,  but its food they have stored and they will continue to dry and cap over any uncured honey.
The numbers in your mother hives ( donor hives) will have taken a massive knock, but you should have seen plenty of brood about to emerge (part of the selection criteria)  so this will soon make up the losses and bring the hive back up to full operation within a few weeks.

Create a Flow
Theres no flow really now,( a little bramble and some clover and pollen from the abundant maize plants but thats only for the next two weeks or two) so its really important to create one. So sugar syrup has been fed to each colony, until the queen cells are capped over and they will be fed again upon emergence.
This is very easy and in the summer its amazing just how quickly the swarmed colonies build up their new home (nucs) in to three to four full frames ( out of the 5) in only a few days. Its also very important to say that you must not over feed the nucs, however tempting.  Just enough to keep the hive in the right balance, keep the bees drawing up comb. but not too much to take away space from the very soon emerging queen.
I was feeding 250ml every 2 to 3 days for the first 6 days, then the same on day 15 for another 3 feeds. Its  worth it, the colonies are then stocked up prior to there winter, and the developing young queens are born in to a strong, well fed environment, during her mating flights.
This is the way forward for me,  the production of good queens, made under the best possible conditions, but thats for next year, now i have the nuc banks to give me all the resources i need.

So my good friend Alan called me to say he had had a call from a friend who had a swarm of bees in and outside electric meter box, so we went to investigate. 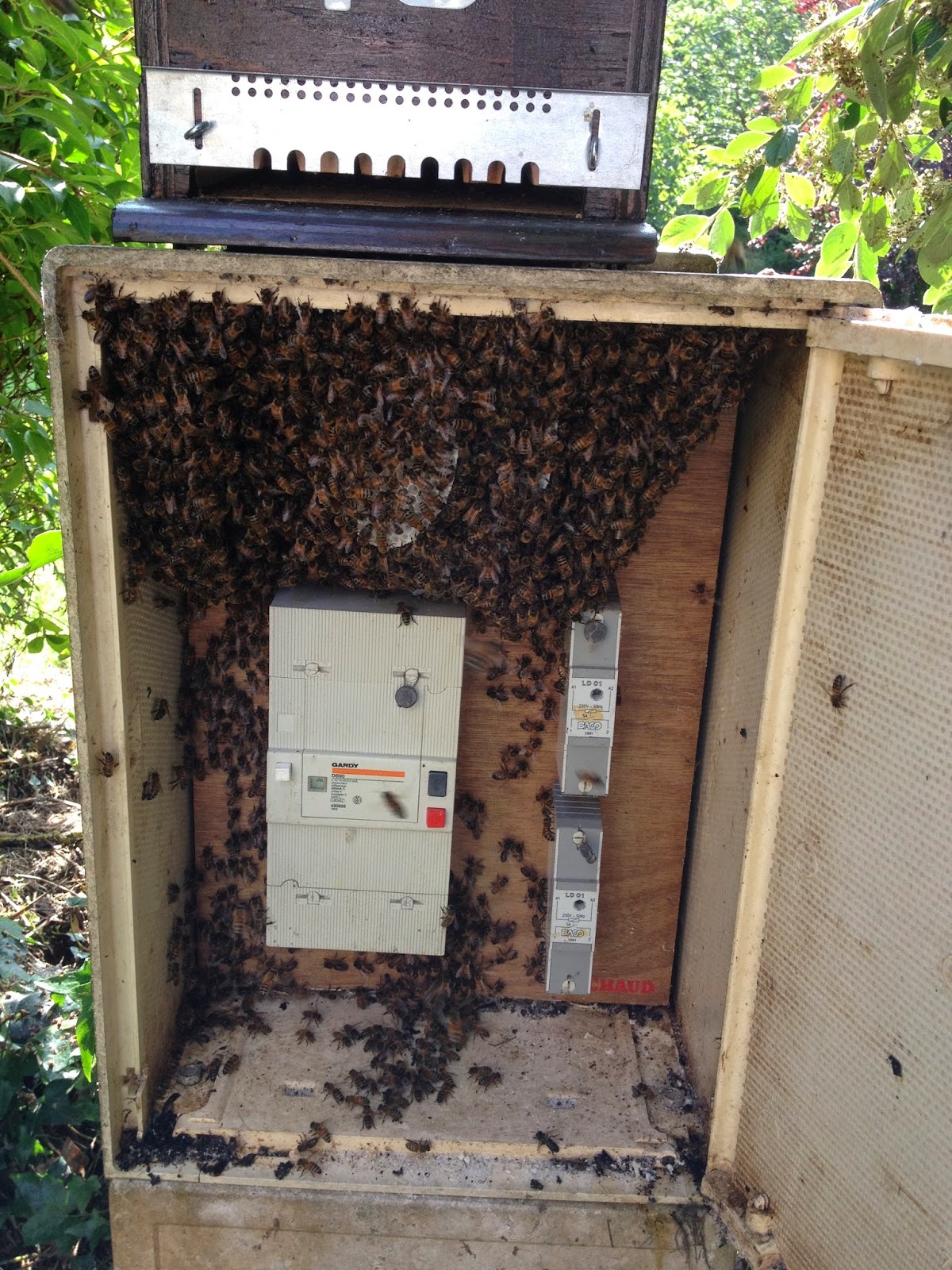 This is what we found, a newly arrived swarm , probably no more than 3 days since arrival, had made this its new home. The entrance was just the small 1cm square hole in the front of the box.
So rushing in, where angels fear to tread, I quickly lifted out the few bits of newly drawn comb and shook the bees from that , in to my waiting nuc box. Sure enough this worked but only for a short time. The queen obviously decided she didn't like the box, or the frames , or something,  did a u turn and left the box initiating a flying swarm with all the bees following her.
Fortunately they landed on a nearby cherry tree, after giving us a nice display of a beautiful swarm, on a lovely calm  sunny day 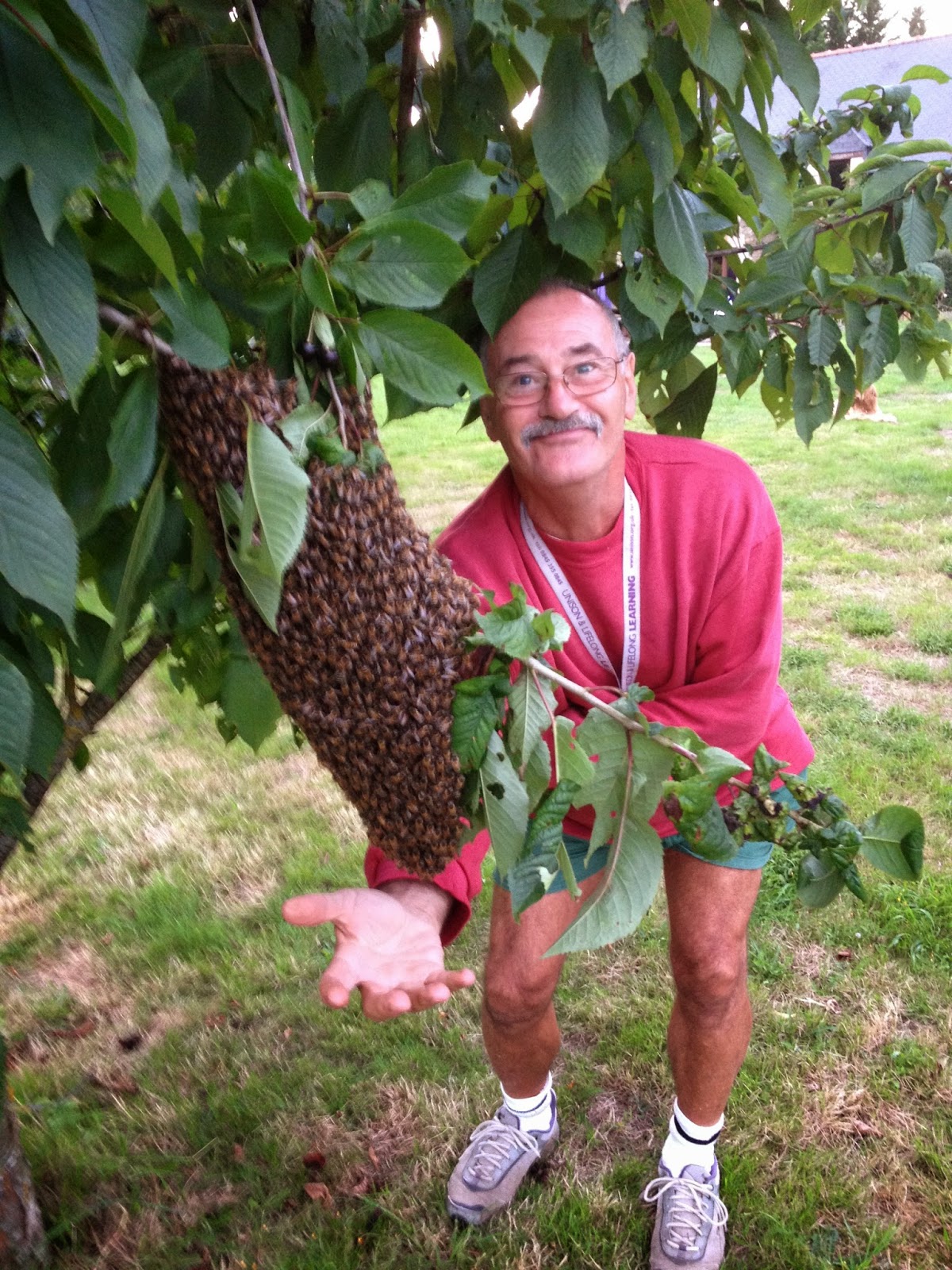 We then decided it was best to leave them hanging there for the rest of the hot day, rather than risk them moving off through our disturbance. sure enough they were still there in the evening, when they were relatively easy to hive. 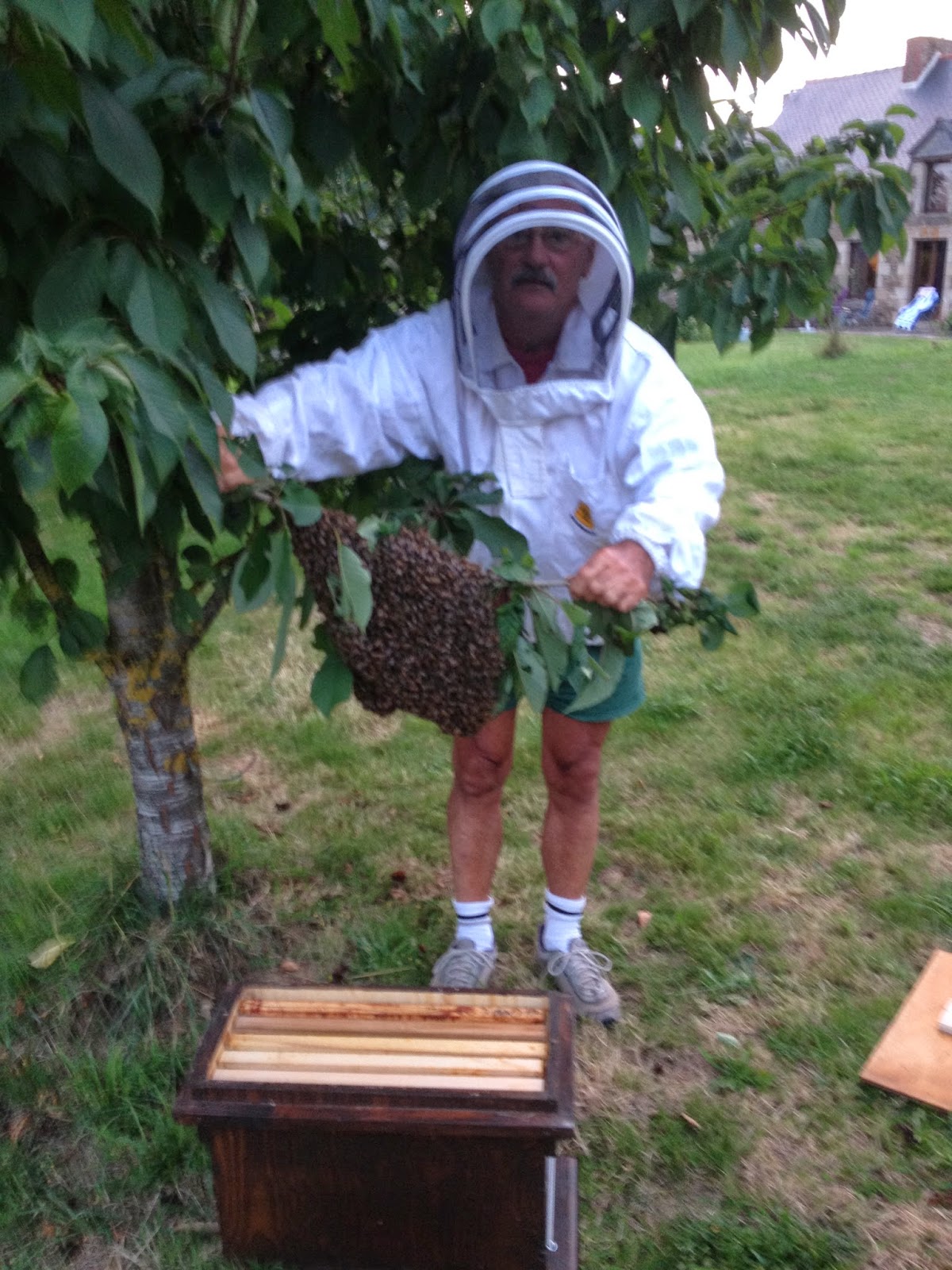 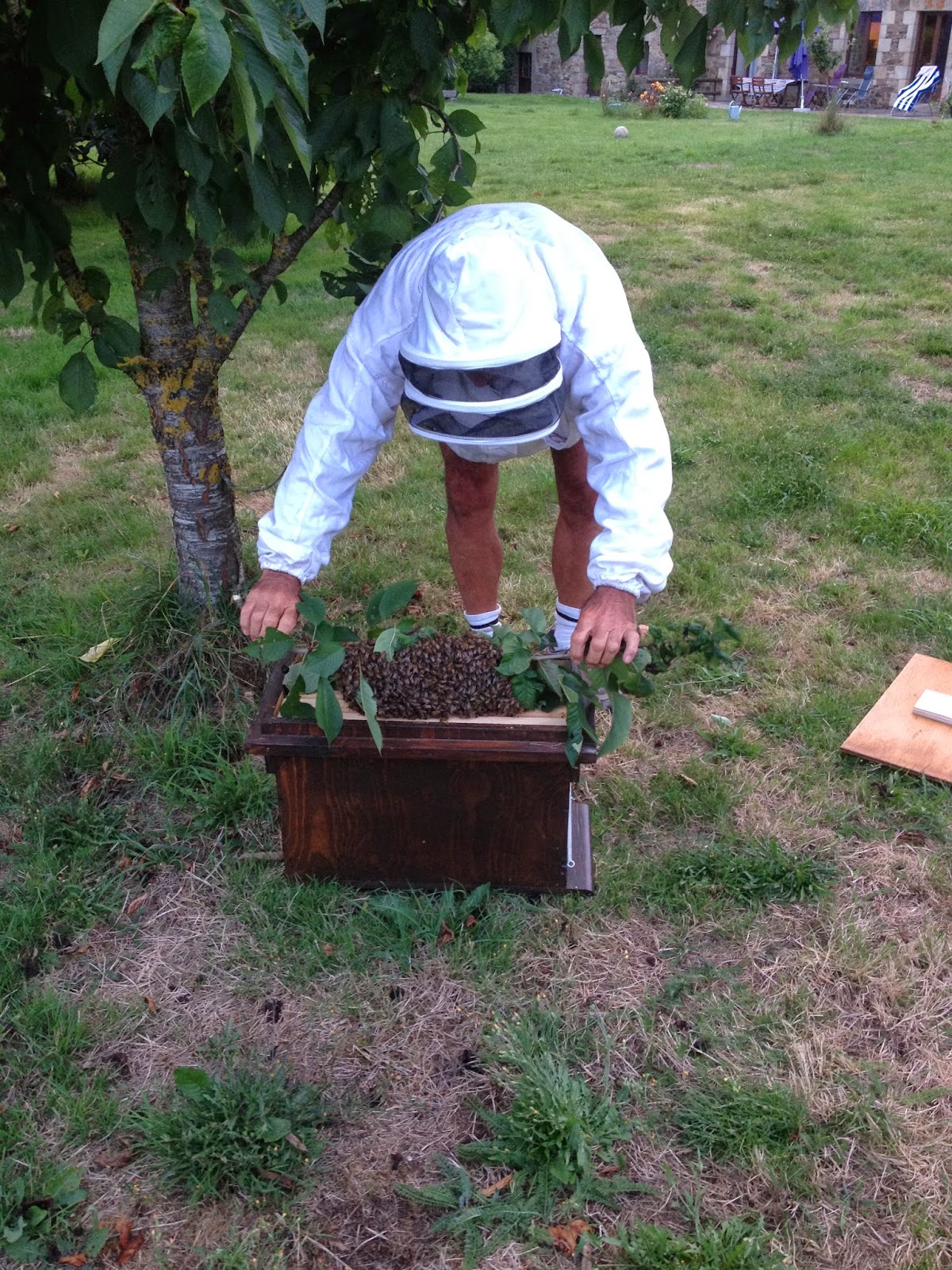 Always wear a vail when handling swarms, docile that they seem, it only take one sting on or in the eye and you will really suffer!!

Good result, another swarm safely captured and now doing well. Its also useful to note that all artificial swarms created will not be going in full sized hives, theres just not the nectar flow. These will be kept over winter in  nucs and their spring build up and overwintering quality, together with general state of the hive can be measured.
Next spring is going to be interesting!! Time to make some more Nucs me thinks!!!