Swarm Traps deployed.
In all I have 34 traps out this year. I finished putting them all out last week. 30 of them have the feromone nasanov in and 4 of them just have lemon grass oil in. I tried to remember to take a picture of each swarm trap after it was deployed. This is a great help in remembering which hive went where.
The season is about 3 to 4 weeks late this year and to be honest the chances of trapping many swarms are not good.
Firstly the seasons of 2000 and 2001 were very dry in their summers and last year with the terrible weather we had from mid April to mid July lead to problems with requeening motherhives or requeening weak queens in general.(suprsedure). The cool temperatures, low numbers of males and  just  generally poor weather has lead to a decline in wild colonies by perhaps 30%.
Saying all of that ,i am still optimistic. Bees are very dynamic. and as long as i can catch a few swarms I will be delighted. If i get any where the 30 % success rate of last year then i will be very pleased!
All my traps contained at least 2 old smelly frames this year, due to last years losses, so you lose on one side but gain massively on the other and i also managd to rotate my nucs last summer and almost all my nucs,  that are now swarm traps have been used at least once before. I have made another swarm trap for tree deployment, that is just pinned up. all different things to try test out different ideas. 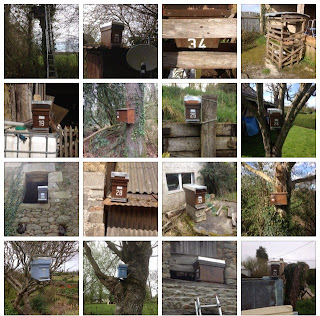 Most traps are about waist to head height, in sheltered corner, face south west to west and  are in areas where i have caught swarms before or i just cant resist the area due to its topography, position in relation to old trees and its sheltered positions. 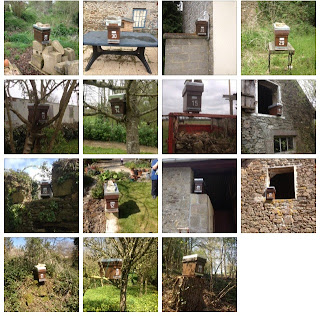 Swarm traps are a really great way of introducing the general publec to beekeeping.
Very often i will make contact with a landowner that happends to be near to where i have been working and i ask them if they would mind if i put a swarm trap on their property or land.
Mostly the general public are quite negative about bees but the tide is turning thanks to education and the internet.

So when I arrive with one of my traps in the spring, put it up and explain to the property owner what will happen when a swarm arrives they are usually mortified or quite aprehensive as to what probems these bees might cause when they come. The truth of it is that they sometimes dont even notive a swarm ariving or it arives when they are out and all they notice is a few bees starting to come and go with pollen on their legs.

Once this has happened most people realise and enjoy the experience and sometimes peoply have asked me to leave recently arived swarms in situ, so they can watch them develop. Generally though its a good idea to remove a swarm within a week . When that queen starts to lay and the bees become a little more protective, its time to move the colony to the apiary. 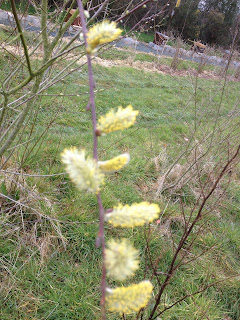 Some of the typical wilow pollen that came out in early April this year three weeks alter than usual. 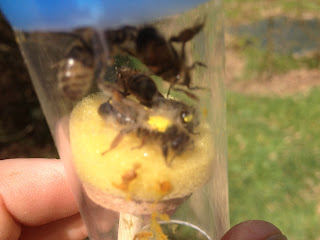 Queen Marking
I took the opportuity to mark a few of my queens during early April. The colonies were still on the small side and the queens are easier to find. I generally dont like to rip the colonies apart just for this purpose, but it if i see a queen, and am ready with the marking cup, she gets a yellow dot on her thorax.
As I have said before, I like to keep my qeen in the mother hive during artificial swarming.  That way I feel my mother hive isnt lost for honey production afterwards and finding the queen quickly is a great help. The yellow I use dosent indicate the year of my queens , its just easier to find the queen, quickly and I have been told that yellow and white paint tends to stay on he best, so thats why i am using yellow.
This year we suddenly seem to be getting some near normal weather. The temperatures are slowly rising and for the next two weeks it looks as though we will have perfect spring weather for spring honey production, totally different to last year.
I have put on three honey supers on three on my colonies and will harvest them about a week later this year, but certainly no longer in case of crystalisaton in the frames, now that would be a shame!
Happy beekeeping . The next 4 months are the best of the year, I just love this time of year.