Prime and cast swarms. Artificial swarms and making a new home for a colony in my barn wall.

Holiday Swarm
Well just got back from a 2 week break and typically one of my hives had swarmed while i was away. Fortunately its not all bad news. I caught the swarm in one of my swarm traps. So that was the first swarm!
The second was a typical "cast swarm". much smaller in size,a few days later, and with a vigin queen!
I recorded a few seconds of film . I shook this one on to a while and very slowly they crawled in to the hive. It had been raining a little  and was cold so They werent very happy, but still very well tempered.


So once i had instaled that swarm in to a Nuc, then i went on to check my other hives.
Principally i have put three honey supers on three of my stongest hives and thought that as the weather had been so poor up until now, the chances of swarming would be small but, in beekeeping , expect the unexpected! It was obvious that it was one of these three that had swarmed,
Hardly any honey in the honey super, and a lot less bees and also the swarm directly in front of  suspected hive.
So then I checked my 4 hives and 3 of then had closed queencells on brood frames so i had to perform artificial swarms on these 3 , after dashing back to the house to find some spare nucs!
So, all those were artificially swarmed, but not in ideal conditions and not as many bees as i would have liked in the colony but, really not with much choice over the matter, or face losing your bees and a weak colony for a little while longer. At least if i act now then things should recover by the time of the summer honey starts to flow, well thats the theory!!!
Creating a nich in the wall of my barn for a swarm! 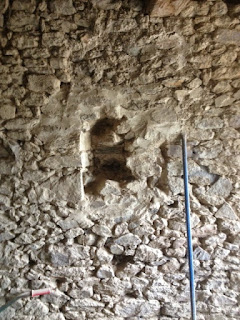 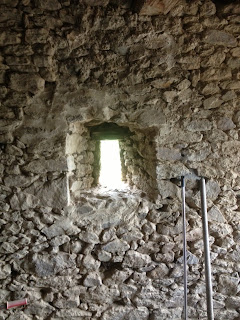 The finished exposed window, how it would have looked all those years ago!
the next job will be to build a frame inside the rear of the widow(inside the shed) and some how incorporate a glass viewing strip, including a  door for access and then to build a front landing tray and incorporate a winter mouse guard and closing  entrance door to shut them in if needed. Ie, work on the barn or oxyalic acid treatment.
So thats my plan and i hopefuly can have it completd in the next few weeks so I can get a swarm established this year. Its lot of work  but i think i can get it finished in time.
I am going to fit in a timber roof with lines of wax melted in to the wood at the correct distance in the hope that the build nice vertical combs so i can see whats going on all the tme. Should be great fun if it works out. 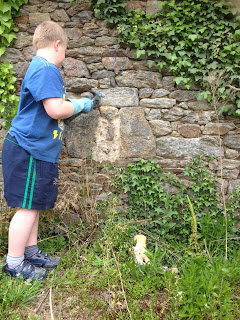 With the help of my son Thoma,s we soon had the front carefully knocked out!