First inspection, Snow and Rebalancing of the seasons

First inspection of my hives was carried out on Sunday 10th March. The weather was not ideal but the bees were in a very relaxed mood.
To my delight, all my hives that were queenright, had successfully made it through to what I thought  was the end of the winter. Inspection of the brood sections revealed suprisingly good brood laying by all my queens, the size of capped brood reflected in the size of workers availible to support the larval stage foraging, feeding and nurserie duties. All of my colonies were fed with half a litre of sugar syrop.
Four of my colonies had brood and eggs on four sides. (of two frames), quite remarkable considering how cold the weather has been.
I am sure that egg laying frequency, like many animals nust be influenced by day length increases and not just food and temperature levels. We have had cold weather, 6 to 8 degrees colder on average than this time last year and i would have expected to see smaller colonies and smaller brood pattern, but generally its all good news.Most hives were still wel stocked too, so last autumn was a good forraging season! Also no sign of any nastiest  that one would perhaps discover after a winters confinement. 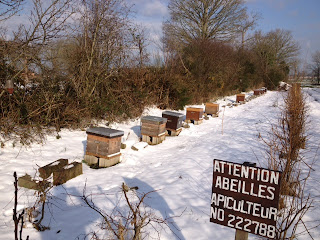 So, three days later we had Snow, not just any old snow. This was a full on blizzard with temperatures below freezing for at least 3 days. I managed to get to my hives 3 days after the snow to get this pic , just for the record, but by then a lot of it had already started to melt. we had about 20 cms that drifted in the strong to gale force winds that came from the east.

A thoroughly unpleasant period of weather, but not at all unusual for March. I have memories of the daffodils in the snow as a child and there they were again, full bloom and mostly ruined by the frost! 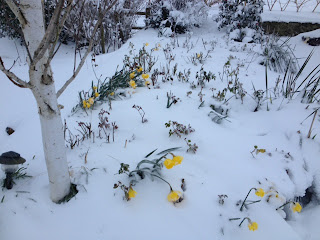 One cant help but think that actually this is a bit of a normal season. For the last couple of years at least, I recall we have seen many shrubs comming in to flower at the end of february and I would like to think that this year we are starting  to see the time scale of things begining to be "reset" to the more average time. Flowereing blackcurrant and forsythia are usualy well in flower by early march. This year its really only just begining to open its buds. Blackthorn that seemed to be coming in to flower some 2 weeks ago, has completly halted and masses of buds remain unopened.
Oil seed rape is some 2 weeks behind on last years flowering,  the plants are very stunted after having a very late sowing last autumn, poor growth and germination and then sitting in waterlogged soil all winter. The flower stalks are only 30 cms high at their maximum. but putting all that aside, we still have the potential for a very good season. the ground water tables are at their maximum  so lets keep our fingers crossed.
Some good pollenrich shrubs you can plant for your bees this time of year are this false quince "chaenomeles" Spp 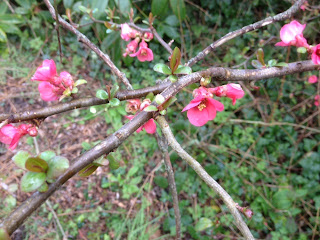 Gorse is really good but dificult to propagate unless you have good gloves!!! 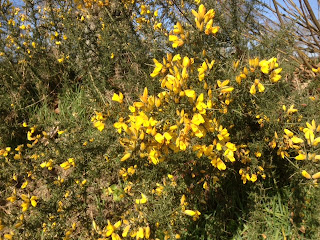 Evergreen clematis are aslo really early to flower. This is a picture from one of my clients gardens. I caught a swarm not 10 meters from this shrub last summer and it was alive with bees again, as these highly scented flowers were begining to open. 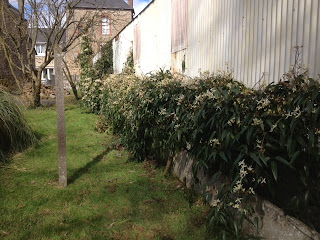 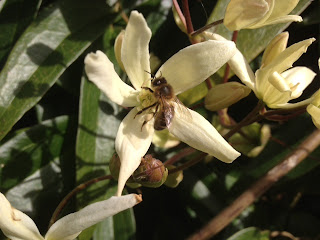 Finally, all my swarm traps are ready to be deployed. I have forty "Nucs" but i am going to deploy 30 of them as swarm traps this year. I dont think i will better my percentage catch rate of last year but I will be trying my best to keep searching and improving on my bees gene pool.
They will go out in about 3 weeks, as this years weather is near normal at the moment. I am looking to deploy them all in the second week of Aprill.
Each nuc has at least 2 old frames of old comb inside. This due to my losses last summer, so hopefuly those losses will asist me this year. Its a bit  of give and take in this game! 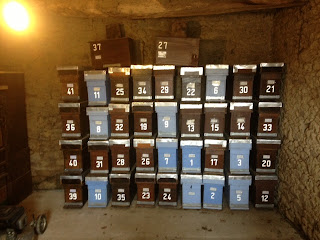