Spring in the apiary.

Well spring has sprung and apologies for not posting but it's been a very busy period. 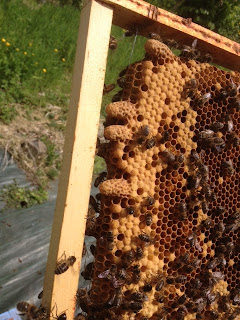 I had a few early swarms from my own bees but the weather was poor and again the nuc hives struggled to requeen due to the continuous cold temperatures.
Overall it's a positive note and it's nice to say the bees have shown how dynamic they are in the face of adversity. 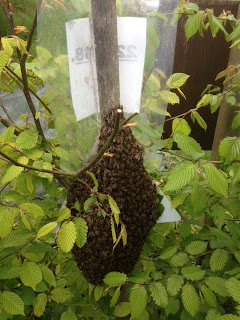 How Ironic, a swarm on the back of a warning sign saying "beware bees"

So far to date I have caught 4 swarms in four swarm traps. I am hoping for a few more in the next few weeks as the bees here should still be capable of swarming in until the end of July.
The forecast is good and up until very recently we have had little or no sunshine, so it could still be a good honey harvest.
Conditions are good. The chestnut trees are coming in to flower ( three weeks late) and if the forecast does live up to its predicted trend then we should have  the potential for a lot if honey. 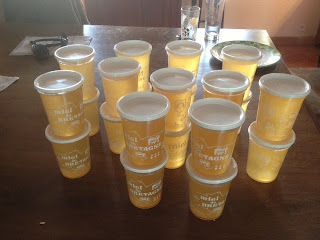 Heres some of the spring honey I took from two of my hives.


I will be artificially swarming all my strong hives in the latter part of July, and moving honey supers with the mother hive, so they can continue to dry and cap it all, ready for the harvest around the last week of August but that's a long way off yet.
Typically two of my strong hives have become queen less at the wrong time so they are our of production for this year. I doubt they will requeen in time! 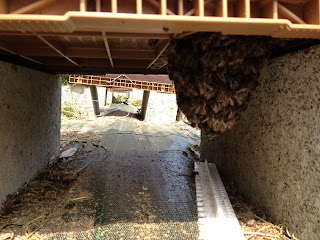 Natural Hive rqueening can result in this problem when using  an open mesh flooring. In this case the recently mated (i hope) queen has returned to the hive, can smell it, and thinks she is back in. So the best way to deal with this is , with two of you., have another base handy. Unclip the base and lift off the hive. Your assistant then carefully lifts up the base with the swarm hanging underneath and then replaces it with the spare one. The hive is then put back on top and the swarm can then be lowered on to the top of the frames and hopefully the queen will resume her role within the hive. 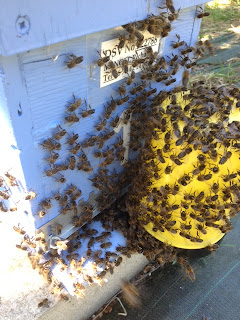 Had a swarm from one of my nucs that I was feeding. It had a queen cell in it, or at least i think it was a single cell? but when I came past the other week they had swarmed on to a nearby tree and i didnt know which it had come from so I went back home to get my swarm catching box only to find on my return they had all gone back in to this Nuc. So it was a queen obviously couldnt decide if she was swarming or on a mating flight.  You can see in the pic they have all just returned with loads fanning on the front of ther hive. Lovely to see when I was there. The air was heavily scented with Nasanov. 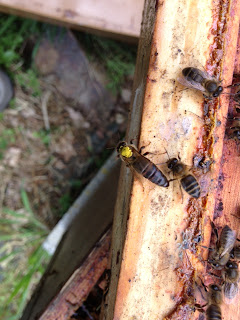 Cracking picture of one of my queens. I mark them all with  yellow. I find it is easier to see and is supposed to last longer in the hive.


Next year I want to raise a batch of queens to try and get around this problem and by using small mating boxes I am hoping to be able to have a few, ready mated queens on standby to be inserted in to poorly laying  or queenless hives if need be. But that will be next spring before any of that will be considered. Its going to take a lot of work but it looks like a great project for next year. I will need to have a started hive packed full of bees, with the existing queen not present and then a finishing hive to finish and incubate the queen larvae if i have any! I will be posting how i do this. Theres still qite a few things i need to get sorted out prior to next spring.
I will be making my own queen cups and the grafting in to these quees cups so I will have a go at doing sme grafting before that, just to get used to using the tools. I have purchased the chinese and stainless steel grafting tools. I see they both are reccomended but everyone has a preference. Bought some frame hangers to try. Only £7 from the uk. I think they will make life easier at the apiary. I am always having to lean frames up against the hive, on the floor and this should now get rid of that problem. They are a universal fit. 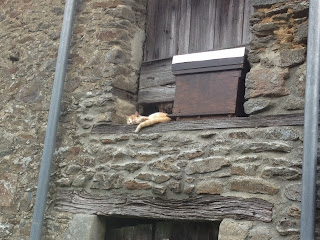 Finally , do you think this cat is waiting for a swarm too, or just being a typical cat and having an afternoon snooze in front of my swarm trap. Never a dull moment!