Swarm from an Artificial swarm? What!

Could not believe my eyes, when I passed my apiary last sunday morning. A swarm was issuing from one of the nucs that was an artificial swarm,  made some 16 days previously! 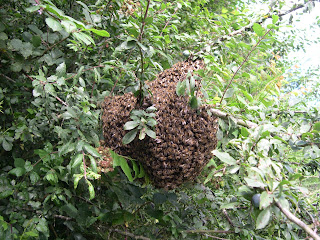 The swarm settled about 4 meters, away on a sloe bush ( blackthorn)

16 days is the key numbers here! Thats the time taken to build, feed and pupate a virgin queen.
I think the only explanation I can come up with is that I know the hive was packed full of bees at the point of artificial swarming . The mother hive or donor hive was the only hive that has started drawing up 2 honey supers, meaning it had a lot of foraging bees that came home to discover that their home had shrunk and the queen had gone without leaving queen cells.
You may also say well, "perhaps the  swarm is because the existing queen from the donor hive, stayed on a frame that was transfered to the nuc?" so to avoid this problem of not being sure, I checked all the donor hives the week after and was pleased to find newly laid eggs in all the hives, so that that theory put to rest!

The bees had  immediately made emergency queen cells and 16 days later and  with the weather being excellent the first queen cell opened and a virgin queen climbed out of her guarded cell to find a very full hive packed with bees, pollen and honey.

At this point she must have chosen to swarm. I think therefore you could call this a "cast swarm" due to the fact that it was a swarm  with a virgin queen and not a prime swarm leaving with the existing queen.
The difference being that you should`nt expect to see any eggs from this queen for at least a week or 2, As she has to go off and mate, then return to the colony and start laying.

The weather since has been excellent but I am still not going to interfere with the hive. There`s just no need!


As soon as I had collected the swarm and hived it, in to a nuc and then placed in a space of its own, but next to the hive it came from, in case they decided to leave the hive if they were queenless. They would then probably all craw, back in to their previous hive.

I immediately then went in to the hive and looked at the state of the rest of the queen cells. None of the others had hatched out, and the one that had opened must of been the one that left the colony and it was unlikely that she would have stung through the sides of the other queens cells if she was going to swarm!
I quickly had a think and decided that I could use a few spare virgin queens, so I cut out a cluster of what semed to be 5 and left another 3 on the other side of the frame. That should at least leave enough to leave the nuc a good queen.
I didnt have a container, so I just put the queen cells on my seat. A few minutes later my son sitting in front of my truck, started yelling, saying "theres a bee on the seat." Turns out it was one of the queens that had just hatched out and was crawling around looking for a colony to join!

This then got me thinking about the other hive that was very slow to requeen. so I picked her up and put her on the entrance to the queen less colony and in she walked.
This is one method of re queening without using a queen  introduction cage. This virgin queen has very weak pheromone smell  and or of an existing colony and its the only time that a colony of bees may accept a queen ( virgin) in through the front door.
The other benefit of this spare virgin queen, is that if the hive had re queened then the virgin queen probably would not be  accepted of killed by the much stronger dominant egg laying queen. So nothing to loose.

The remaining queen cells, I put in to separate jars, as one more had hatched out on the way home and they need to be kept apart, before they try and kill each other!
I phoned my beekeeping teacher , who like me, had lost hives this year due to poor re queening after swarming, who was around to collect them within an hour, most grateful for this rare gift of spare queens in late august!
A great result. I got to see a swarm issuing from start to finish, caught the swarm, and also got  spare queens to requeen queenless hives! all luck that I was there to see the swarm come out of the hive as other wise I wouldnt have known where it had come from, thats if it stayed in the tree for long enough for me to spot it.
I am very happy!

Coming up: A cut out of a wild  honey bee nest at Callac, Video to come later, when editing is complete.