Bee Nest Cut out at Callac.

Cut out of bee nest from start to finish.

I had a call from a couple who lived near the town of Callac.  They had a bee nest in there wall for just over 2 years and were looking for someone to possibly remove the bees, as unfortunately they were becoming a bit of a nuisance. Not surprising really as the nest entrance was only about 2 meters away from their front door. I was amazed they had tolerated it there so long!
I then wanted to be sure that If I was going to drive the 145 mile round trip, that the bees were in a cavity behind this old bricked up window and not in a plasterboard cavity behind that, making extraction virtually impossible

The answer I wanted arrived and luckily it was concrete render inside (behind the nest) so there was a pretty good chance that the nest would be easily accessible through the front window.

Just for reference the owners of this property had taken a photo of the swarm, as it arrived at the hole in the wall of their house. They arrived on the 24th june 2010, so they have been there 2 years and have probably swarmed as least  once. 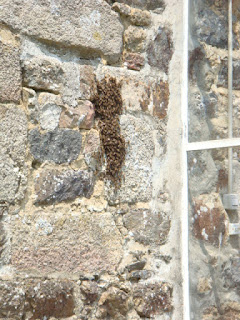 This is the picture of the new entrance  before I started the extraction, as the bees had moved their entrance to the above right of the supporting lintel. 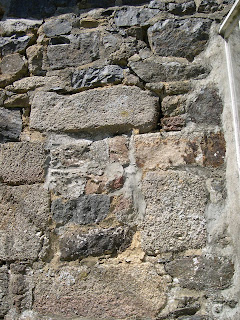 You can see clearly in this picture , the proximity to the front of the house, even though there was a small glass conservatory over the front door, it was always a task just getting in to the property through a haze of bees! You can also clearly see the window outline. 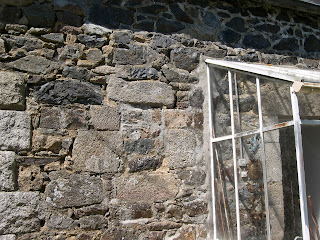 Before doing anything else I smoked the bees 3 times heavily, I was pretty sure that this wouldnt drive then anywhere but out of the nest before going back in again, only to gorge themselves on honey, making my job a whole lot more pleasant.

Part one was  to hack out the existing masonry, after firstly explaining to the home owners that this is what we call "deconstruction". You should always get the property owners consent prior to any work that may cause damage to a property, even if you are removing a nest of bees.
The masonry was luckily very loose, and once I got going it came away easily to reveal a wonderful sight of the front of the nest. 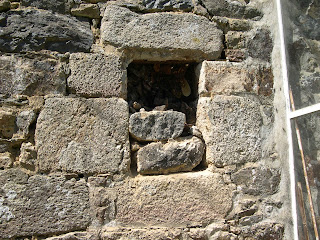 You can see mainly smaller pieces of comb in the front of  this nest, with the larger slices of comb being situated behind. Its basically a matter of space and the bees had built in around the space available. 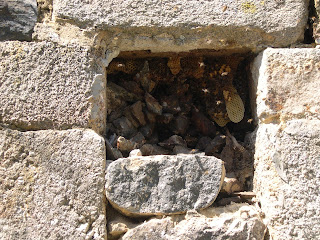 The smaller rubble sized pieces of stone were all glued together with propolis, sealing up the lower part of the nest as well as stabilizing  the whole area by sticking everything together. 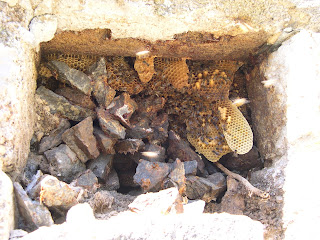 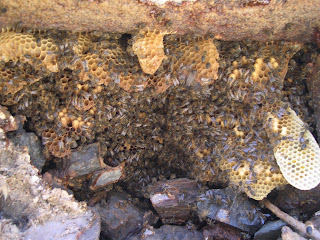 After removing the first few sections of  drone brood comb,  I then got stuck in to the real larger sections of brood comb. I managed to cut each section away at the top, then carefully grab each piece , so it didnt fall to the ground and cause the bees to get very angry and possible damage the queen if she was there to be found on the brood comb?
.
Incredibly on the third piece of comb, their she was, a beautifully shaped queen with a really good sized abdomen. Its one of the signs of a healthy queen. I had put my queen clip in my pocket at the start of all this, just in case by fluke I did manage to see the queen. 20 seconds later it was in the bag and she was in the clip.
Once you have the queen safely captured, the colony is relatively safe, no matter how bad things go from then on. 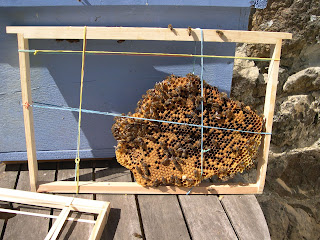 I, like many others like to use the elastic band method of holding in the comb.  After a few days the bees normally chew their way through the bands, but normally by then they have also built new comb and glued all the old pieces to the frames.
Incidentally, I had also tied the queen clip containing the queen, to one of the frames. 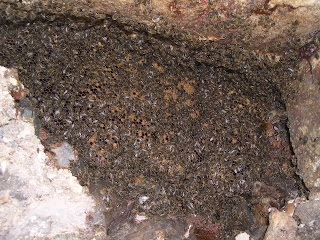 This was the largest section of brood comb, spanning the whole length of the cavity, which I estimated to be be between 40 and 50 litres. Each time I removed a section of comb, I brushed all the bees off in to the hive, as many of these bees were nurse bees and happy to stay with the brood nest and its odour. 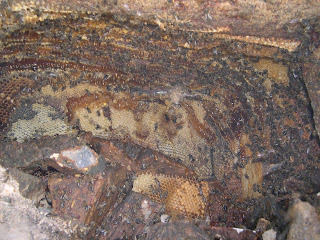 By this stage You can see at the top, all the sections of comb that I had cut away, crossing the roof sections from left to right. Behind all the brood was the honey comb. There was several large slabs of this which is what I would have expected in August. Not a huge amount but about 10 kilos. When you get to the honey comb you need a good sized bowl of water at hand to wash your gloves in, each time you cut out a section.
This is essential for keeping things clean other wise  you cannot touch anything as you gloves are totally coated.


Now I have removed the nest, placed all the salvageable comb in to its frames, together with a large amount of bees. Each time I smoked the cavity a lot of bees migrated from the inside of the roof to the outside entrance hole, so what I needed to do was stop the going back in to the old nest site. 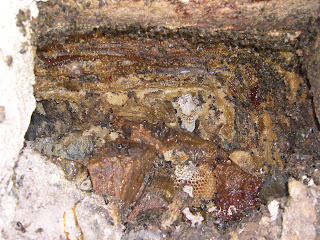 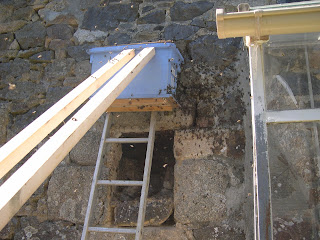 Bees returning and clustering  around the existing entrance. 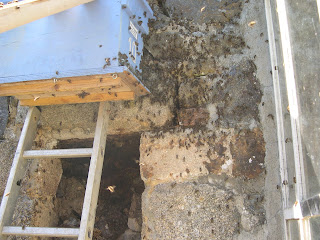 What I did then was to smoke all the bees out and then block of their entrance , so the bees would naturally look for another way to the nest and then find the new entrance to the left of its existing place, with their queen inside. 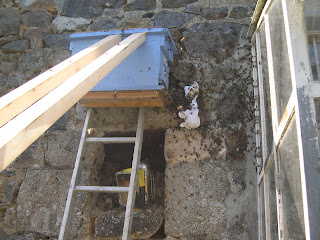 This seemed to work a treat, and very soon more and more bees were slowly making their way in to the nuc. 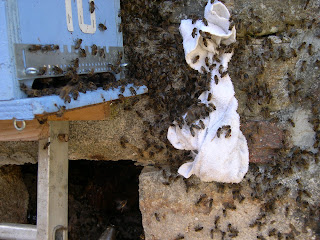 From the next 3 pictures you can see the amount of bees around the entrance way reducing in numbers, as the number of foragers returning was quickly reducing with the onset of the  evening. 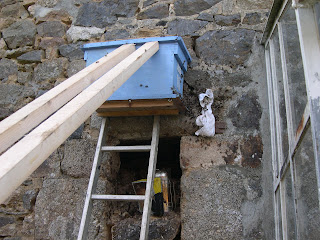 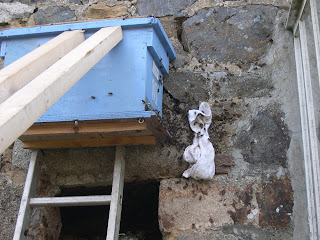 The majority of bees , now inside the box.
It is at this point when you have to make that decision, close up and go. I had the queen, a large amount of brood and comb and a lot of bees. so I dropped the front lid and they were in.
Its also important to take a breath at this stage. Trying to lift down a heavy nuc full of bees, at the end of a long hot afternoon is sure to be a recipe for disaster, with all that work ruined if you drop that nuc.
Fortunately all went well except I forgot i had not used this nuc for transporting bees before and during the 90 mins journey hope I had to battle my way through bees escaping through a small hole and flying around the car, which meant I got stung by my eye, which always makes me look as though I have had a stroke.
This was the second sting \I had got the whole day, the only other one being on top of my bum whilst bending over Lol , one nill to the bees! 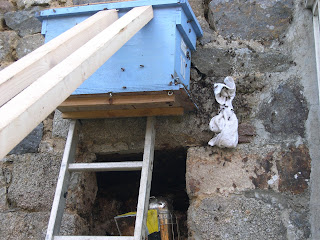 So I got the nuc back to the apiary that evening, opened up the hive and let out the queen from her clip
The next morning I put on a feeder and let them get on with it. Its late summer and they would need time, good weather and sugar to rebuild their nest.

I opened up the hive to my relief, quite a well organised repair work  going on.
Lots of pieces of the original comb that I had tied in with the rubber bands were being extended and welded to the side frames as they were also gnawing through the supporting rubber bands rapidly, with only a few remaining. 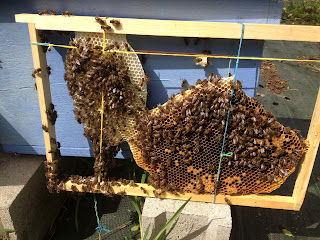 You can see the original piece of comb on the right (much darker in colour) and the newly constructed piece to the  upper left in clean white wax and also joined to the frame.

I have to say this is a really interesting way to learn about beekeeping. If you ever get the chance of doing a cut out then I would recommnend you have a go. Its a load of work, but the rewards are there.

Very many thanks to the home owners Dee and Keith for letting me remove these bees.
It was a a real pleasure to have this rare chance of seeing a wild nest as well as saving the colony.

Its not always possible to save a colony,  if they are  in a chimney of in accessible area, but in some cases it can be done.

I will be adding a video, as soon as I have sorted out the editing.
Richard