Late swarm.
Caught a late swarm in this trap in the hot spell last week. It must have issued the first or second day of the really hot weather. The trap in about 1,2 meters off the ground, facing  North, but it does get the sun for most of the day.I checked the trap about 10 days before and there was a few bees checking it out but not in large numbers, so it was a very nice surprise.
Not an enormous swarm but nice size,  that will get away well. The queen had already started laying and there was already a remarkable amount of pollen and honey stored in the centre frame which would indicate they have been there for at least a week. Normally one may expect a few swarms around the beginning of July but not really at the end of the month. This is a clear indication of  just how bad the weather has been over the spring and early summer with  the nectar flow still running well in to late July.
This swarm will stay in this nuc until next April, because it is unlikely to draw up enough comb and store more than five frames of provisions before the onset of autumn and  before the queens start to slow down her laying frequency .Also it is easier to heat and manage a smaller area if you have a smaller number of bees in the hive. Its all a matter of economics. They are capable of existing as a very small colony in a large hive for overwintering, however the odds of surviving the winter are less in a larger space.

Supersedure
The other thing to remember is that with all swarms, it is likely that  the queen is in her second year and she may have swarmed due to her coming to the end of her life.
If this is the case, hopefully the current queen will have started laying eggs in her new home and the new colony can become established before  the old queen dies or becomes weak,  leaving a window of opportunity to supersede the current queen or make emergency queen cells in the event of her sudden death.
For both kinds of queen replacement bees need eggs that are less than 3 days old. If no eggs are available of that age, then the colony is lost. Its also one of the main reasons why so many swarms die after swarming.
The queen is lost or exhausted by the swarming process or she dies shorty after esatabishing a new colony but has not started laying yet. 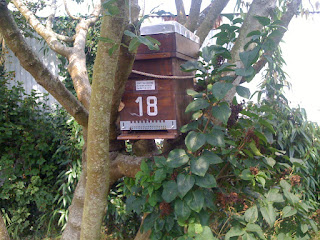 Due to the hot weather all three of the recently created artificial swarms  have struggled with the temperature.
The reason for this is that during the process of creating an artificial swarm, you move your existing hive from its existing position, to another place and subsequently all the flying bees make their way back to the nuc in its place, and always struggle for space but it is necessary, as the more the bees confined to this small 5 framed nuc increases the chances of successfully raising a new queen for the colony.
On hot days you will often see bearding where, bees have to leave the hive in an attempt to help regulate the temperature within the colony. Very often they will beard in the day and return to the hive in the evening when things cool down. Its actually a good sign of  hive management. 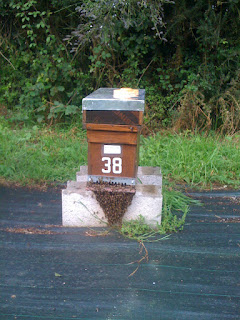 I wanted to show this picture of some Drone brood comb that I took out of a recently failed hive, that had failed to re queen successfully. Typically to the outer frame, was this beautifully constructed gallery of  drone brood comb that had since hatched out, but a good example of just how different brood comb is from normal worker brood. Many people cut out drone brood from the hive, as it is really a waste of resources to produce drones in the hives we look after, but in the big picture your own drone brood may not be made to produce drones for mating with your queens, but bees are genetically built to produce drones to ensure that there is always a pool of drones to mate with.  Drones are usually around from about mid april to about october, peaking in numbers around mid August, before all the drones are booted out of the hive as the colony prepares for overwintering. They get rid of any possible drain on the colony and obviously useless males are the first to go.! This gets my wife`s vote! 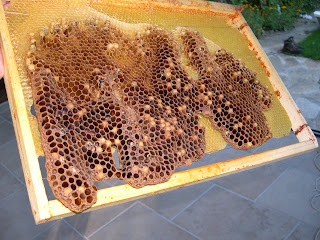 Drone brood raised above the normal  cells of worker production. 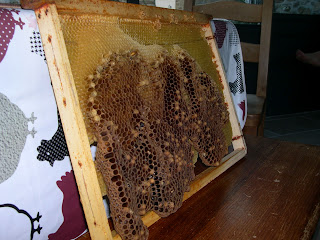