Hello all.
Well, where did the summer go? Its been a tremendous year for my beekeeping. I had two honey crops, made lots of nucleus colonies, opened up 3 new apiaries and have another 100 hives arriving very shortly. I am overwintering 70 Production colonies and have over 80 colonies in Nucs and also 20 colonies that are small mating nucs, which are basically queens with support staff, to be used in early spring to make up some more early nucs.

I had a great trip away in the summer  to a beekeeping family based on Exmoor in Somerset,  which was fantastic, then a trip up to stay for a a couple of days in a beekeeping business based around the Arden Forest in the midland.
All were excellent and I learnt a huge amount from very knowledgeable people. I cant thank them enough for their hospitality and will write up my visit in a separate post. Far too much to gloss over, lots to share.

The year started with a difficult spring, where i learnt an awful lot about the problems with early starvation of overwintering colonies. I lost five in early April. The big mistake I made was going by the weight of the nuc box ( small overwintering colonie), which sadly the wood had become wet  and absorbed moisture, over the extremely wet, damp and mide that last winter was.
Basically some good colonies starved because I had not assessed their stores correctly, they were on empty combs with no foo. If i had quickly jabbed in my hive tool and it came up clean, i would have seen it time to feed.  This is how you learn quickly. After chatting to many experienced beekeepers about this problem , they all have experienced this at some time or another. however i still had enough colonies to fill most of my hives and cover any additional winter losses from existing colonies. 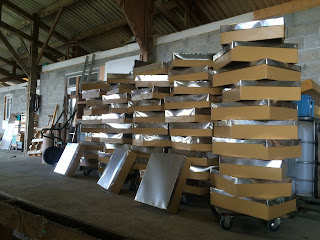 50 Roofs, made from pine  painted up and rain proofed with Aluminium sheet. 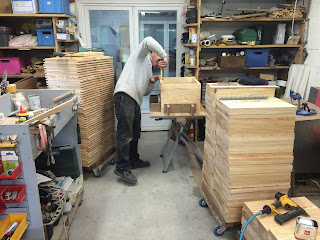 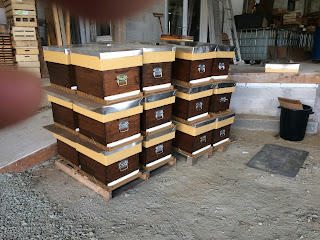 Some of the finished Hives, ready to go out.


This spring I opened up 3 new apiaries and quickly transfered overwintered nucs to the 50 new hives that i had bought in Kit form from a beekeeping supplier. My collegue helped me assemble them over the latter months. He's got plenty of experience in making roofs!! 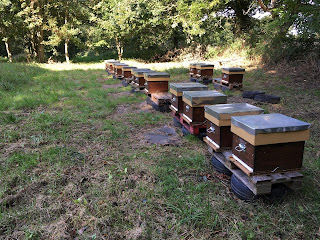 So once all the equipment was in place the bees were transferred in early spring.  The weather wasn't brilliant, but thankfully we had a good 2 week window where lots of bees grew well, expanded in to their new homes  (from 5 frames to 10) I was able to take a  honey crop from my existing colonies and also  a handful of my new ones that had grown at an exceptional rate.

All colonies at the end of the nectar flow 9 (mid may) were used to make an additional nuc from, aka another colonie. This was great and it gave me a few more colonies to fill any last remaining hives.

I made them up strong with plenty of bees because the colonies were very populous. I gave them virgin queens, so they were mated very quickly.
We had to feed a little after taking spring honey and creating a new colonie, but in spring in Bretagne, there is always pollen so bees still grew even if the nectar had subsided before the start of the summer flow. Feed is necessary if you take  from your bees, you have to give something back.

Cell Building
This year i had great success with raising good quality queens with my 3 cell builders. I raised some ok queens at the beginning of the year but as the year went on, the size of queens got bigger as well as better mating  achieved with some good weather in July and August. I found the size of queens was directly in proportyion to the quality and amount of pollen and resources given to queen less colonies. you have two give them lots of pollen and stores during the first 5 days in the cell builder, thats the key, all in the Jelly!! 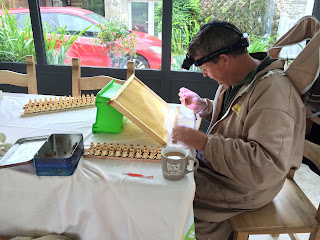 Grafting 12 to 24 hr old larvae  in to Nicot cell cups, before placing in to my hopelessly  queenless cell builder. 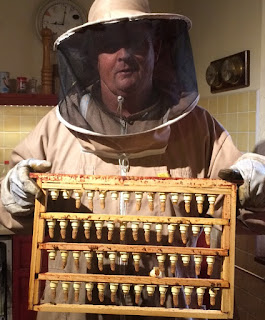 I picked up a small incubator in July, whilst on my trip in the uk, from Banbury incubators. its a little egg incubator, but works perfectly for queen bees. the results were excellent. It frees up your cell builder earlier, allows queens to hatch before introducing to a colonie is the form of a cell, so less risk of one not hatching, as you know its hatched and you can be sure all virgin queens introduced in to queen less colonies are strong and healthy looking. 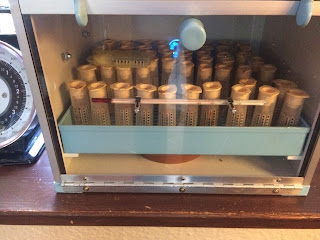 Queens incubated for 6 days after being capped over on day 5 in the cell builder.

Once the queens hatch out I feed them a little royal jelly mixed with honey and introduce them to a queen less colonie within 12 jours of emergence. Acceptance is about 95% so this is a great advancement for me.
There really isn't a problem of acceptance of the queen providing your nucleus or mating nuc is in the right state to accept a queen theres more likely hood of something going wrong during mating than anything else. 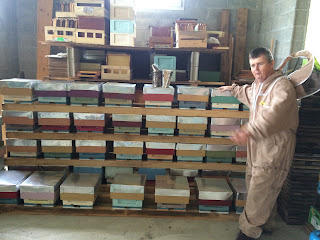 Mini-Plus Mating Nucs made up and kept inside for 24 hrs, before giving a queen. this helps consolidate and calm down the colonie after breaking down stronger colonies in to smaller mating boxes, to form small colonies for mating during the summer season. 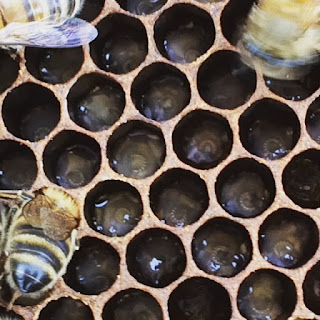 The results of a good , well mated queen and a strong colonie is lots of lovely new larvae, raised with plenty of royal jelly. An excellent site!!!! 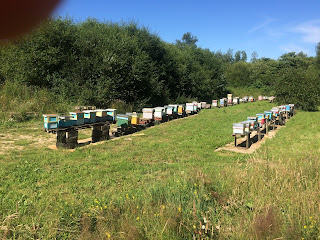 This is the main mating yard we use. we surround this small valley with our best stocks and augment the drone population early may by adding extra drone foundation to the brood nest. Drones take typically 40 days from egg to being able and ready to mate so, you have to be well organised and prepared. The more drones, the better the mating and shorter time it will take a queen to be viable.  The weather any time of the short 4 to 5 month season so you need to be as proactive and give the virgin queens the best possible chances of mating in a short window if the weather is bad, or as we say, not ideal!! 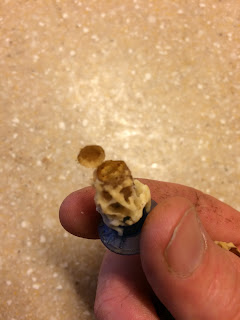 Sometimes we do use unhatched cells in mating nucs, here you can clearly see a successful hatching. The wax cap chewed off perfectly, but a tiny tag left that often holds it to the old cell shell. 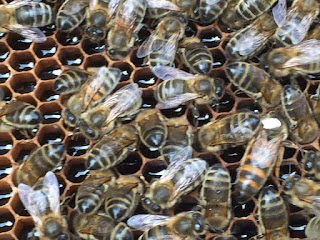 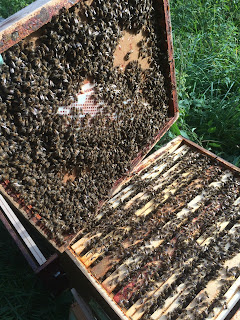 Making up Nucs can be really easy if you do it in conjunction with a bee escape board. Pictured above)  at harvest time, a bee escape is put underneath the supers, , a couple of days later, the supers and honey are removed as all bees are below the escape board. if you lift it up within a few days its a mass of bees,  you simply knock these off in to a nuc, together with a couple of frames from the brood nest containing some brood and instantly you have a small queenless nuc.
We made lots more colonies in late summer, late July and i was late in doing this, as  was away until nearly the end of July, but we were very fortunate with the weather this year it went really hot and settles during the last two weeks of July and Virtually all of August. Mating was excellent and generally within a week after the first 4 days of emergence, so they had a nice period of time to get laying and build up a strong colonie before the season came to a close.

Of course a summer wouldn't be a summer without the Asian hornet. here you can see a typical nest in a fruit tree. this one was destroyed in time, before queens emerged. 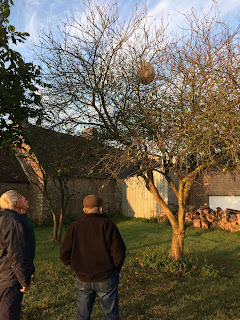 I will do some write ups of my trip to the UK and about more specific things over the coming months, but for now, keep well and enjoy your winter preparation. Its going to be a very quick winter for me!!