Asian Hornet how to make traps.

Well the honey harvest is now almost a memory, except for the 1 kilo white blocks that have appeared in the last week. When they went in, they were a lovely golden yellow/ orange colour
Thats the problem with spring honey. Leave it too long before you harvest it and its crystallised in the frames. Harvest it too soon and its like water and would probably ferment. 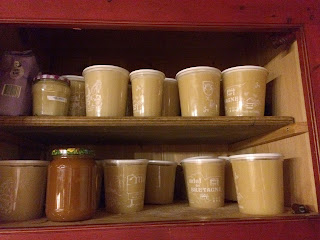 So with the harvest done, whats the state of the hives? well, quite populous actually. So many bees in the hives I have harvested 2 frames from each of my production colonies  and a few extra bees too , put them in a nucleus box and moved them away more than 3 kilometres and gave them a queen cell the next day.
They seem to be doing great, most are foraging and all the queens have hatched out.
3 of them took the queens with them in the nuc boxes and therefore the hives the nucs came from  were without a queen, however I have spares as I managed to make another 13 queen cells last week and their ready for harvest tomorrow.  So I can check and hives that were naturally requeening and give them a  queen cell if necessary. I have also fed my nucs and hives that are queen less.

Even though theres plenty of food around, well last week there was, this week the nectar flow will have virtually stopped, so I was lucky it all happened the week before last, as I was able to take out some bees and they were able to replace frames and bees quickly, while there was plenty of nectar around.
This taking of some bees from the hives did also give my colonies some breathing space. Taking off the honey reduces the hive size within, so you are really forcing the bees into a smaller cavity, unless you immediately give them back an empty super, so inevitable if theres still as flow running and you had to harvest due to the honey crystallising in your frames, its very likely that if you have large populations of bees in your hives that swarming could start.

All hives that gave me 2 frames of bees and brood  have instantly drawn up the replacement frames of foundation, with new wax and queens have laid directly in to the new cells.
Its an instant test to see if the hive is queenless, because new frames stuck in the brood sections, in a flow, in the spring  are sure to be drawn up with worker brood at an instance.

Thinking ahead, looking at the size of your colonies, knowing the nectar flow and planning has given me honey,  queens, made nucleus colonies and have, at present , kept my bees in their hives and not hanging from the trees. So Yes a very good start to the season indeed. 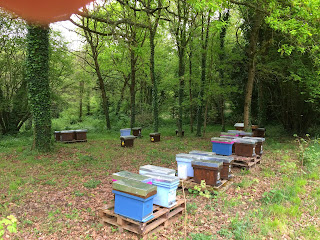 Mating yard with all my nucs containing 2 frames of bees and brood and a virgin queen Cell.


There is now, however, a longish pause in the flow, before the glorious chestnut trees unfurl their month long golden carpet. Theres pollen around and if your hives are nearer urban areas, they will profit more from their proximity to shrubs and trees you dont really find in the rural locations.
In another week when the wild broom is finished I will be checking hives again, checking there enough feed in the colonies and adding a first super to give the bees more space and to start preparation for the next flow. Right now mine have enough space,  as the two frames I had inserted in the hives are now capped over with  brood, so the queen still has room to lay elsewhere. This is key, space in the brood nest!!

From now on until the main flow starts, its all about maximising your bees to a pinacle of readiness. Too many bees might result in a summer swarm. To little and you just won't get much honey. Having young and  well mated queen is key to this, the older the queen, generally the more she is likely to swarm, and the lesser eggs she will lay and subsequently the weaker the colony and the lesser honey you will have!!

So now spring has well and truly sprung,  our thoughts are turning to trapping and monitoring the summer pests.
Asian hornets are now here and here to stay. We will never be rid pf them, but hopefully after a few years their only natural predator, a tiny wasp should increase in numbers and hopefully take out a few more of the nests in late summer!

I have done a video on how I see things and its purely my point of view.
It also details the manufacture of good reliable hornet traps, that can easily be made selective by means of a 7mm hole drilled through one of the lids. Its all explained in the video.