Ivy flow and weather, both superb!!

We've been spoilt this year. The lousy end to August, gave way to two of the best weeks I can remember in September. Shrubs and plants have come back in to flower and given our bees plenty of pollen.
The ivy has now started in to full flower, the plants and hives are again wreaking of pollen, as the bees hurriedly dry the nectar in to honey for winter storage. The temperatures have been in the upper twenties for the last two weeks! 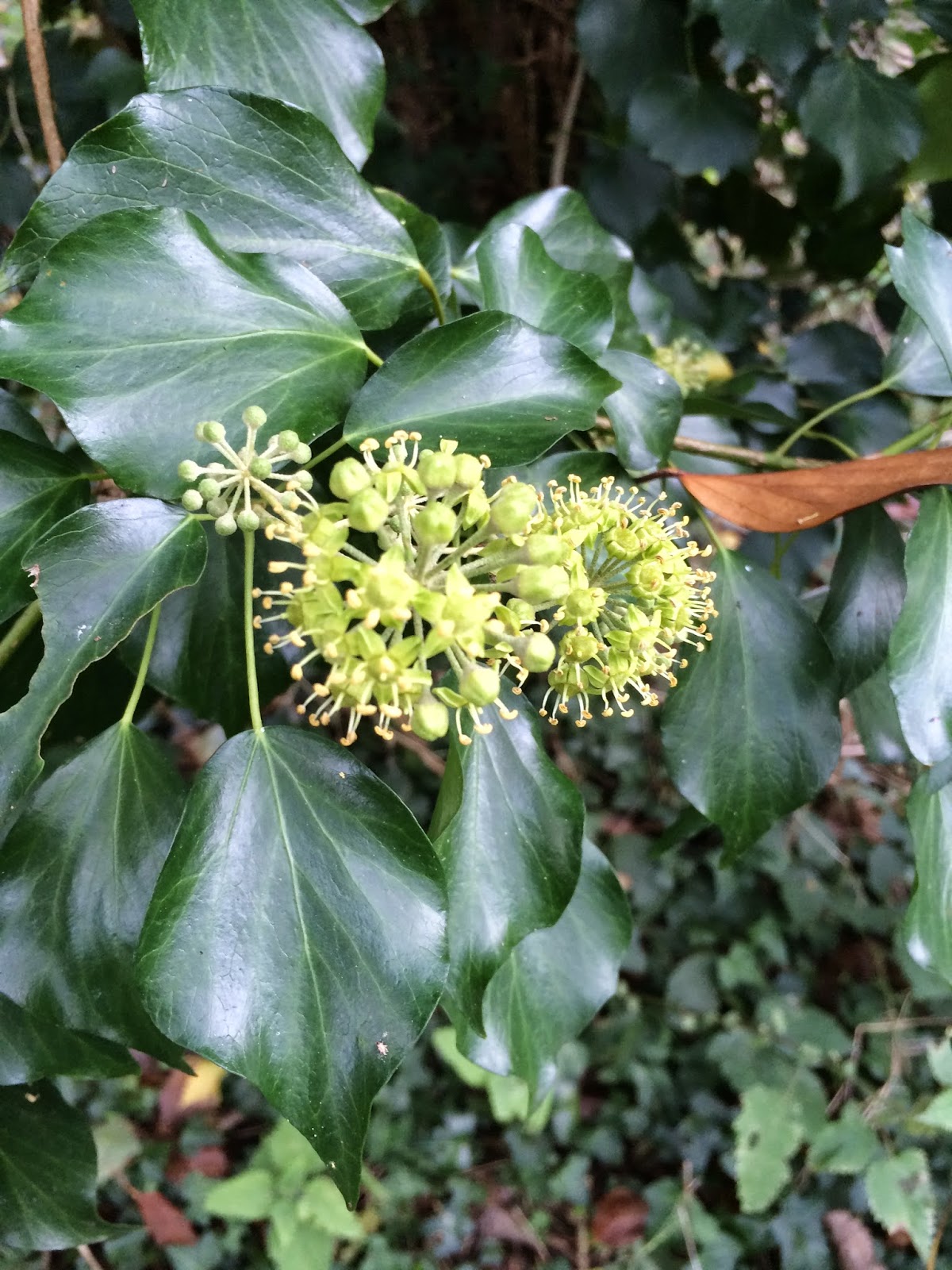 So whats the effect been on our bees? well on comparison to this time last year, we were at the end of a dearth, queens that had virtually stopped laying, were just starting with the autumn bounty that ivy provides.
This year there was no dearth at all. In fairness you couldn't say there was a huge nectar flow that took over once the chestnut trees had finished flowering but instead most people have found, upon inspection of their hives, 3 to five sheets of unhatched brood and high numbers of bees.
This is an excellent end to our beekeeping year. The prospect of bee colonies going in to the long winter months  full of pollen and natural honey is just a bonus that we weren't expecting! The long range forecast is still showing temperatures in the low twenties for there next two weeks, so its all good news.

So whats next, well the feeding should have finished and weak or queen less colonies should have, or very soon be combined with a queen right one. Don't waste your time leaving drone laying workers weaken the hive. Add any spare bees to a queen right colony and put the good worker bees to good use in another colony. Also you might find yourself with a few spare frames for next years traps.

Its a good time to make sure all your queens are marked. Although it might be a bit more trickier this year, due to the numbers of bees in colonies, patients and careful going through the frames of the brood nest will lead to success and a nicely marked queen. This in turn will make it a lot easier and less time consuming when we open our hives up next year to see whats survived the winter.  You won't have to look hard to see a coloured dot on a small brood pattern, anyhow, just seeing some eggs or brood in March next year will be the major bonus. knowing you've got a good strong queen thats survived the winter! 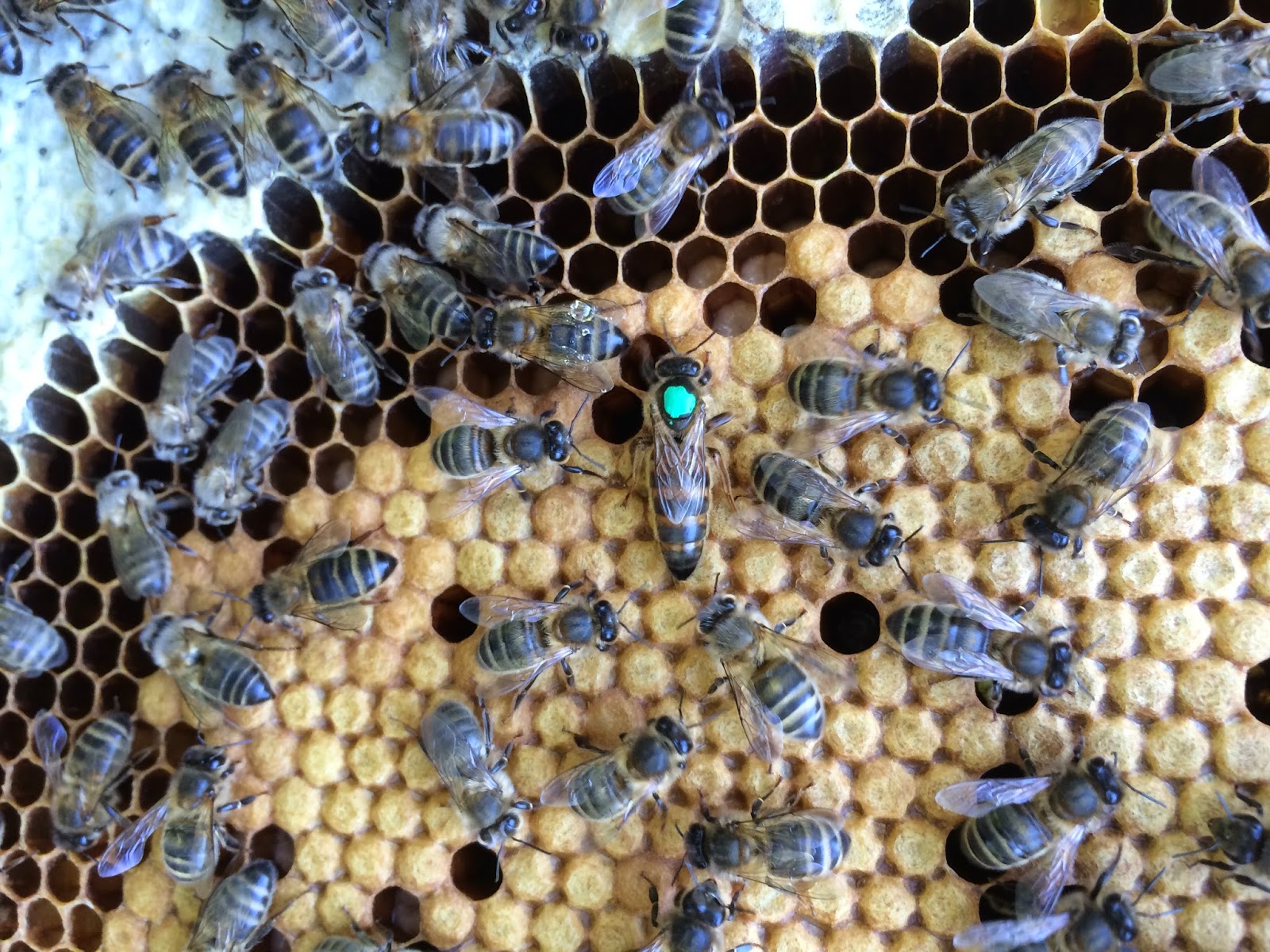 Following the success I had this year, in spring of next year, I will be utilising my queens from my overwintering nucs and swapping them with my old queens from my honey production hives, This being the first year I have done this, will at least guarantee I have a queen, that has successfully survived its first winter,  and is in a colony for honey production. This will hopefully reduce the swarming impulse and hopefully give me stronger hives. They do say a young well mated queen is at or in her strongest point in her life in the spring of the second season.
Admittedly, these afore mentioned queens were made under the emergency response, during splits, or as  we  call it, artificial swarming but I must start somewhere!!
Following this swapping over of queens in nucs, I will then re queen all my nucs later in the summer, or if they swarm natrually, which is probably going to be more likely, as i will have changed the queen to a much older one!

Its my plan to use these nucs to rear enough brood to add ten frames to a very strong hive and create a cell building colony, in which i will raise my queens, for the first time, under the most favourable conditions, in a flow, and when the bees would do it. Not as this year under the emergency response, when its debatable that the worker larvae thats floated down from a worker cell and fed royal Jelly, may not be just the right larvae or the right age, possible making an inferior Queen. It still might make a good queen but a lot more can be done to ensure its fed right the way through its development before pupation!
Working with the bees is so important in all aspects of beekeeping, work against it and you have a fight on your hands. 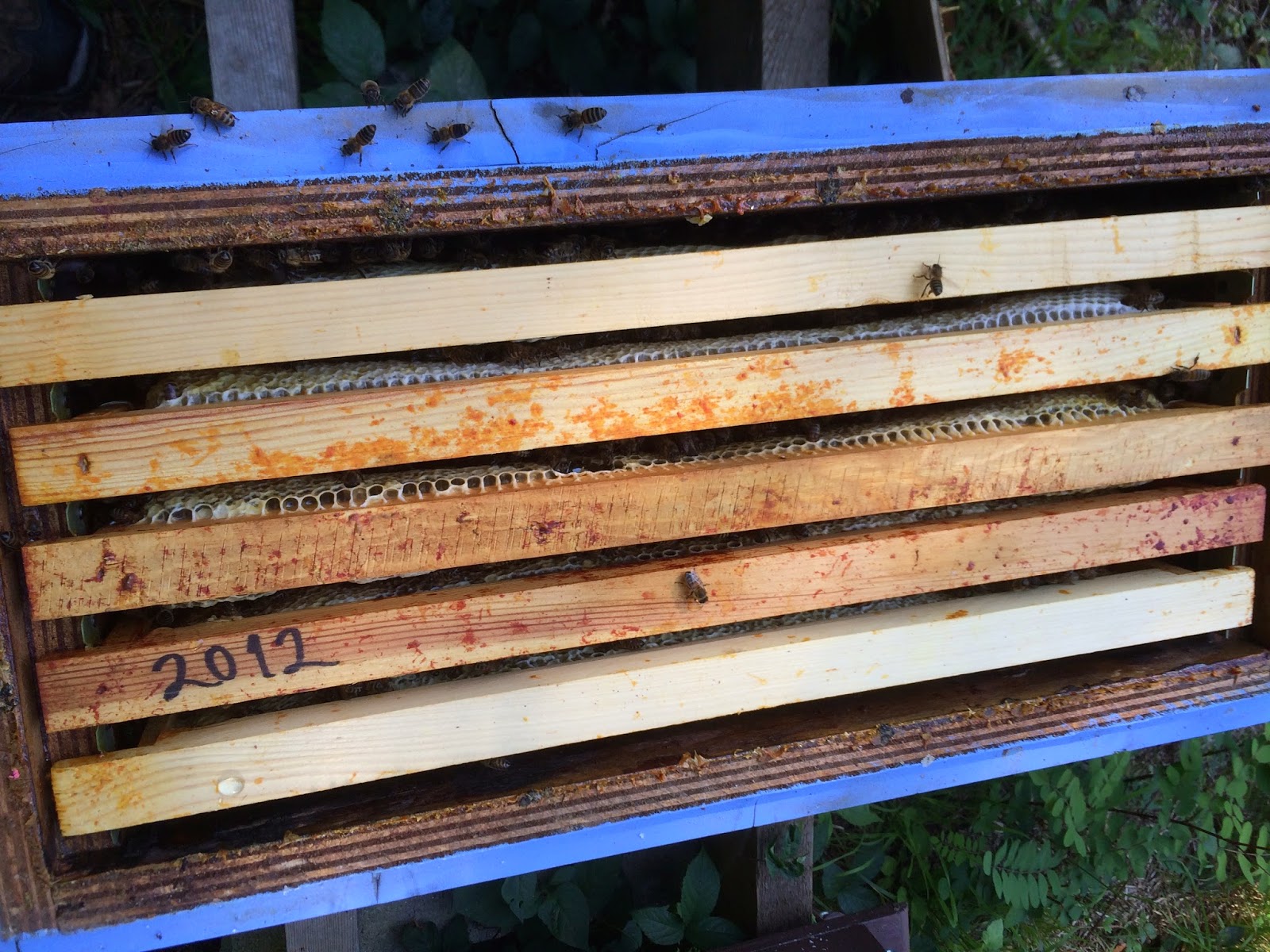 When inspecting a hive or nuc, if you see white honey comb when looking in from the top its very likely that you have a good colony, with a good strong queen. Bees don't store honey like this unless they have good direction!! thats all you need to see, if you have no queen this time or year, the colony is lost and you should seriously consider adding the resources of the hive including bees, pollen and honey, to another hive, that might be low on stores. This ivy flow being so strong should  see the majority of our hives like this is the good conditions continue.

Delightful and successful cut out at Scrignac this late august. 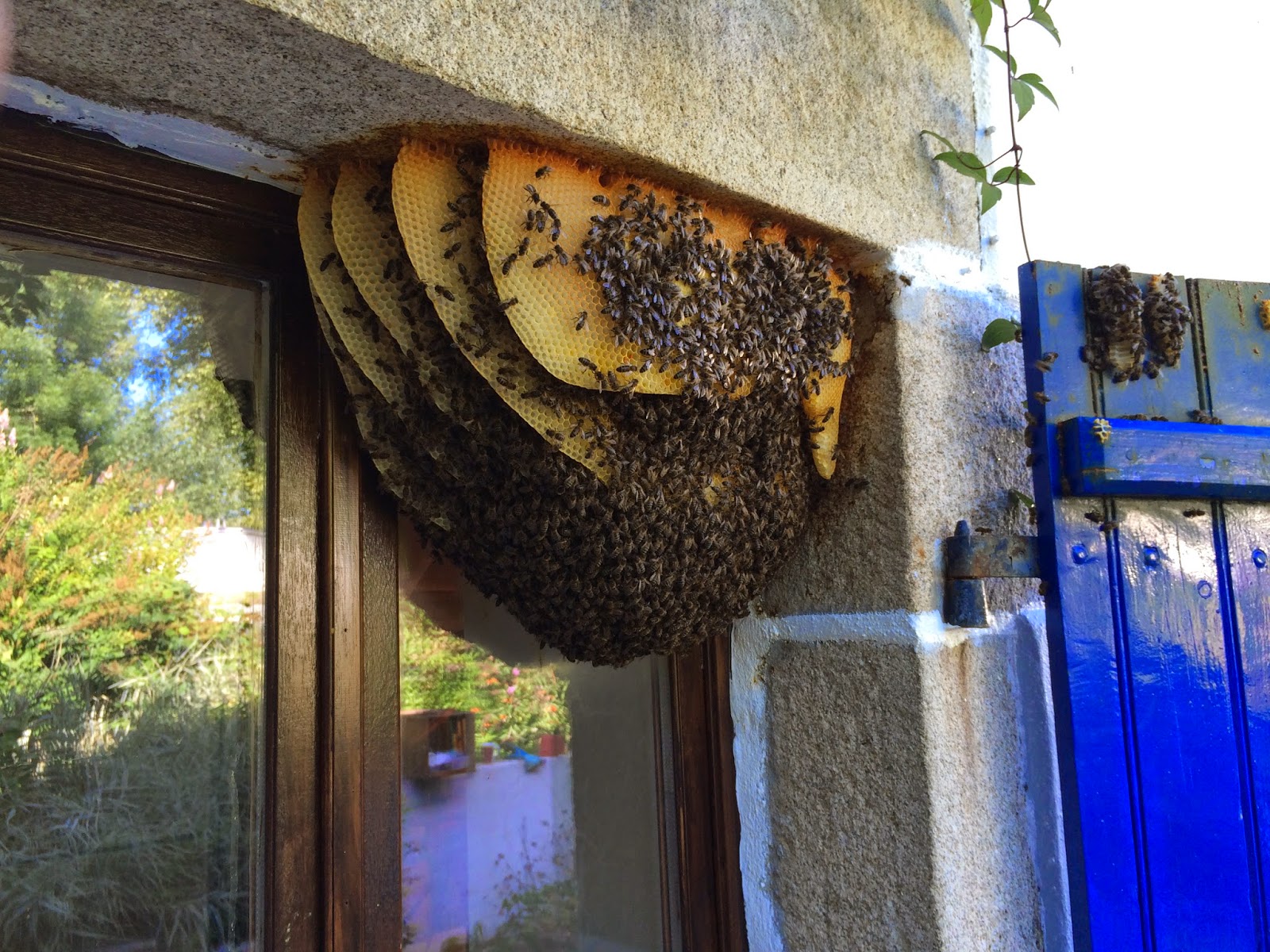 Those bees are doing well in a nuc box. Perhaps a lot of bees in the nuc, but i don't think they will be swarming this year and a strong colony in a small box, will overwinter better than in a large hive!
Thanks as usual to Alan!! we had this one wrapped up in just under 2 hours, but it was 260 kilometre round trip, so we didn't have a lot of time!! how strange is it that we did another one in the same village last year!!

You can see below just how they love their sugar. They emptied 2 feeders in 24hours, so i knew we had the queen, even though i didn't see her during the cut out!! she's marked now, so will leave them alone to get on with being bees. 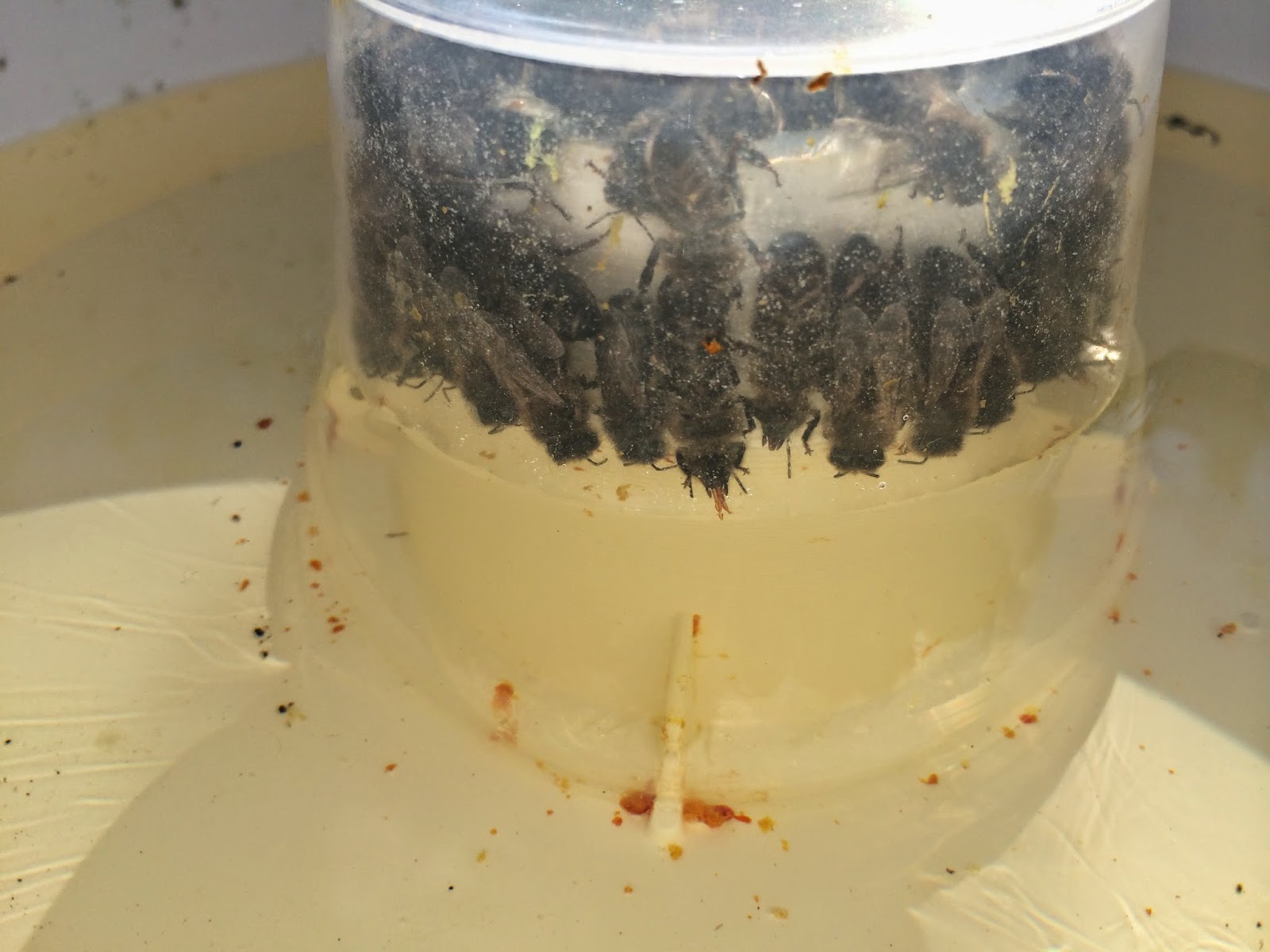 Finally, after the harvest, its time to give the bees the honey supers back to lick clean you can see just how mad they go, but be warned, two days outside is enough, otherwise wax moth starts to lay in to the combs and the wasps start to chew the wax and damage the combs!!


After you have stocked your supers, think about wax moth treatment and prevention. Spray the frames with biological control " Bascillus thurgiensis"
It comes in a powder you mix with water. You  then treat the frames by  misting them over lightly. If any wax moth larvae hatch out or have already hatched out, they are consumed by this natural fungus that causes the larvae to rupture and die. a very useful treatment!!