Pollen, Swarms and just about everything else!

Well what a busy busy month its been. Not even time to do any blogging! Still here i am to report back on what has been an excellent April.

I mentioned my new pollen trap in my March posting, well i used it for a few days and have harvested more than I need,although i am thinking that I might stick it back on my hives and just harvest a bit more, a its easy to freeze it down until needed. 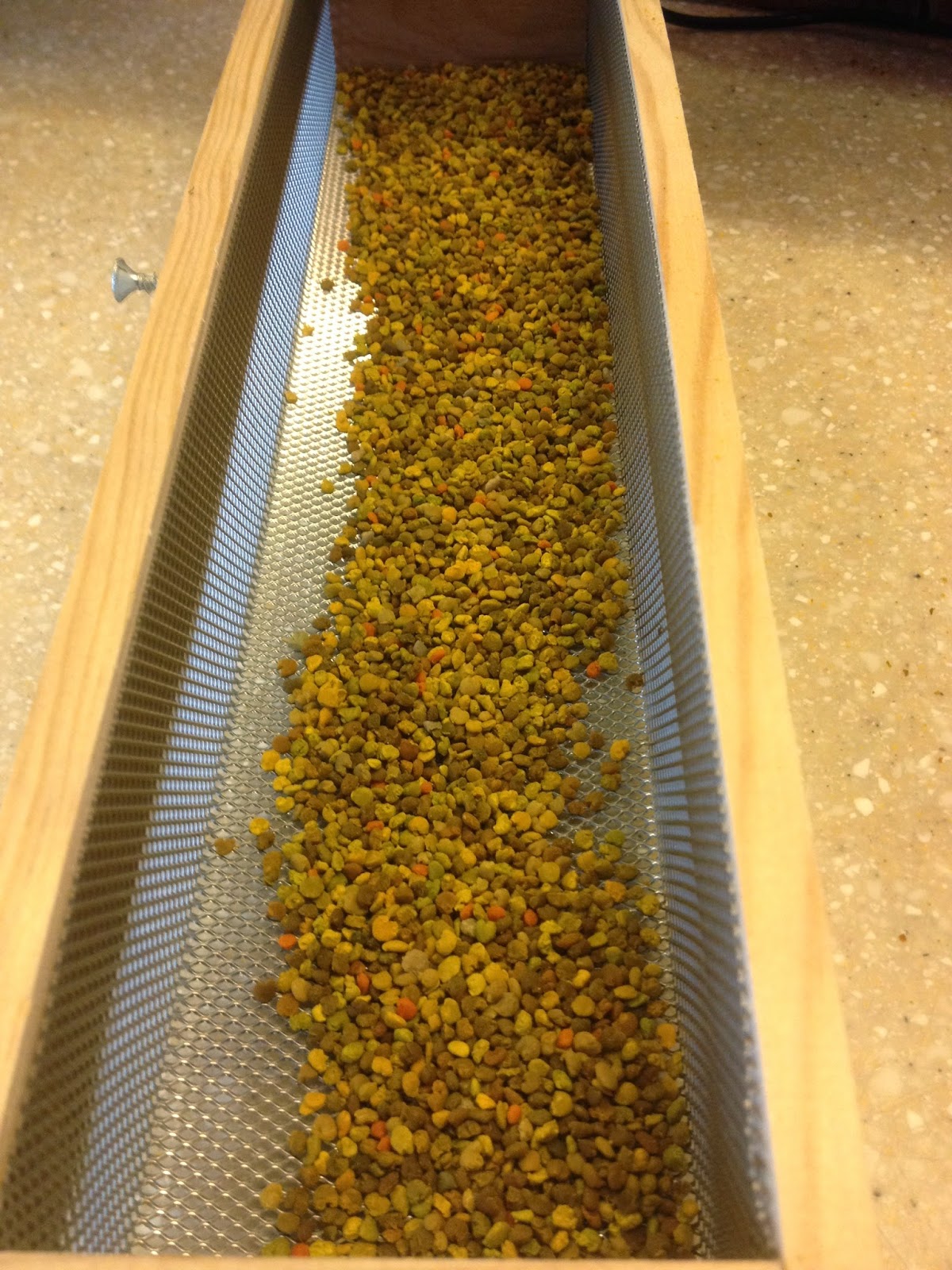 I intend to use it mainly during queen cell production. I hope to have my first attempt in about 3 weeks. There will be a small gap then before i move the majority of my hives for the main nectar flow of the summer.

Spring honey and swarming.
I have been asked many times this spring when will you have your first honey? well this year i will have virtually none. Only one of my hives (of the three) had any appreciable ammount in the super, so on  the other two, the supers were removed and they were artificially swarmed. There was queen cells in a packed brood nest of ten frames. This is good, as they were going to swarm early. So, as far as I am concerned, I am controling the swarming and its going to be at least another 6 weeks before we need the bee numbers high again.
Its been an odd start as well as a good one. Plenty of food around for the bees, a very strong flow indeed. I must remark on how the relacement frames from artificial swarming 4 days previously, were already drawn up! and mrs queen laying in to the majority! the question  will I will be wanting to know, is should i reduce the numbers of bees still further to avoid the bees having another go at swarming. I had masses of unhatched brood in the hives, an i think this spring is so strong that it might be necessary in another couple of weeks. However i am going to monitor my hives  very closely and i am expecting much reduced flow after next week, when the majority of the oil seed rape ha finished flowering and the apple blossom has nearly finished, so i might not have to many problems. I want my numbers high but not too high to enduce swarming again! I may add the first super in about 3 weeks, just to make the queen entirely happy shes got space, but i would dearly love to be able to do this after i have moved my hives but its probably not going to be possible to move them until the 1st week of june!! its all a juggling act.

One of my strongest hives was full of really good sized, accessible queen cells so i cut the majority out and inserted them in to my nucs( with queen cell protectors) for good measure. some had only made one or two queen cells, so i didnt want to miss the opportunity and waste good cells, (made under the swarming response, under deal conditions, by the bees in their own time) possible giving me the best made queens!! Its always something to remember. Thanks to Alan for helping me cut those out and then artificially swarm the hive, the insert all those queen cells! 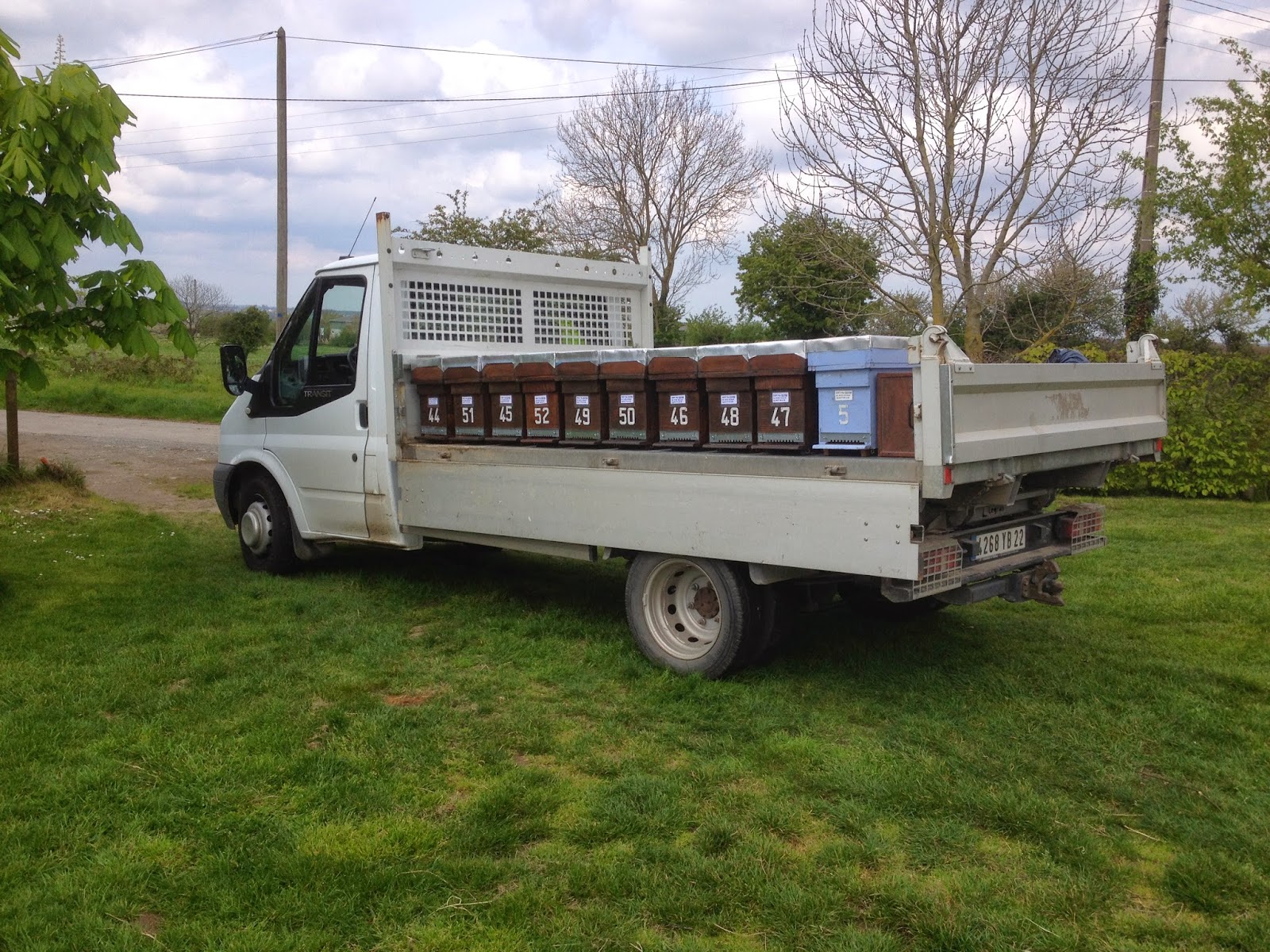 Its also a point to note that eventhough i keep saying "you can never have enough nucs", artificially swarming 10 nucs plus does have its practical difficulties. I have been making more nucs sincelast november, and ive made about another 20 since then, but they soon get used up!
I have also incorporated a ventilated base and also some ventilation in the roof space.
After the last very wet winter and my desire to become more sutainable and create some nuc banks for brood production I have tweeked my nucs a little and this should help against winter humidity and help spring build up. 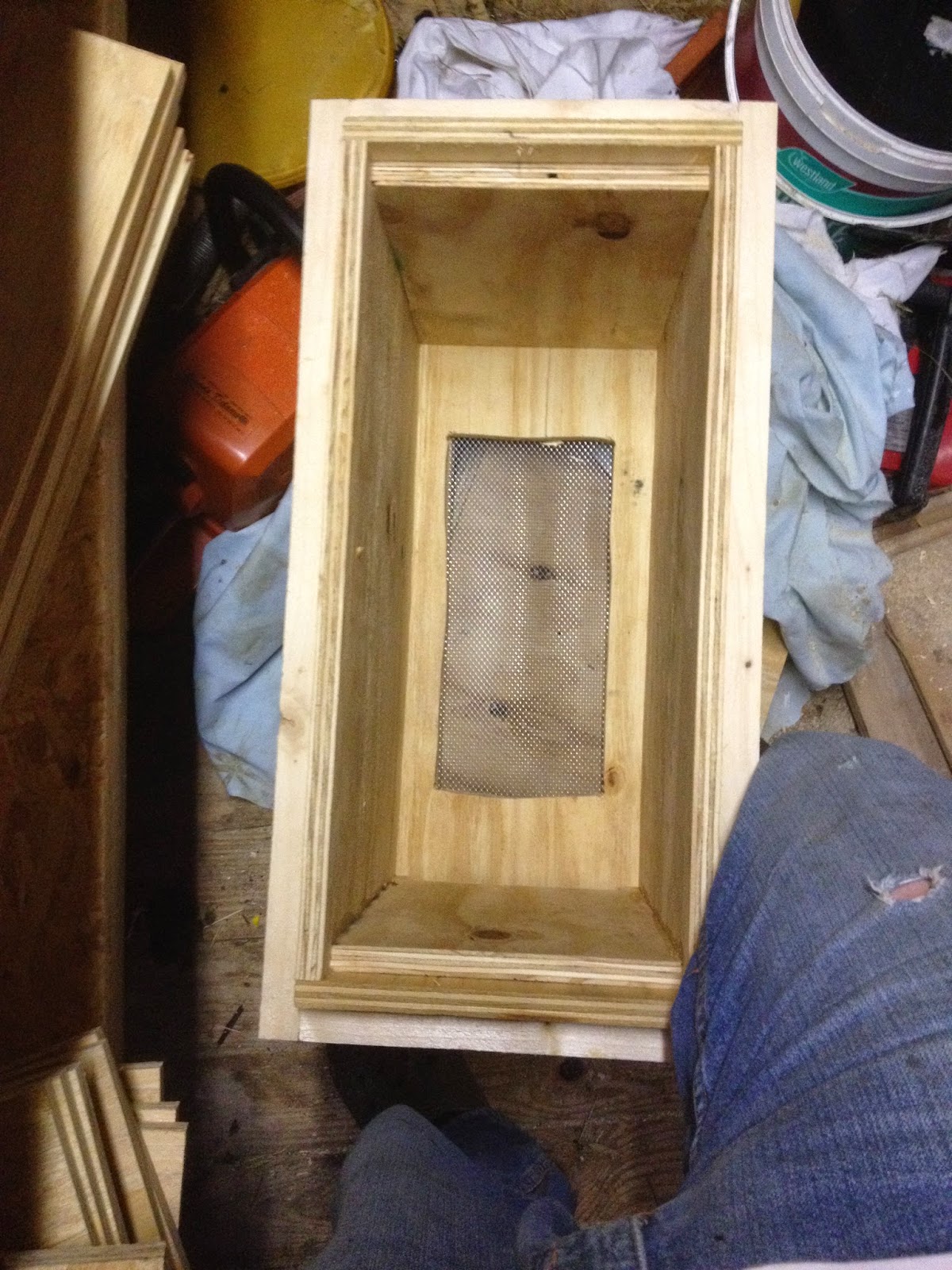 I remove the feet after marking, cut out the middle section and place in the mesh. It could be blocked off, if need be,to create a  sealed box for use as a trap. 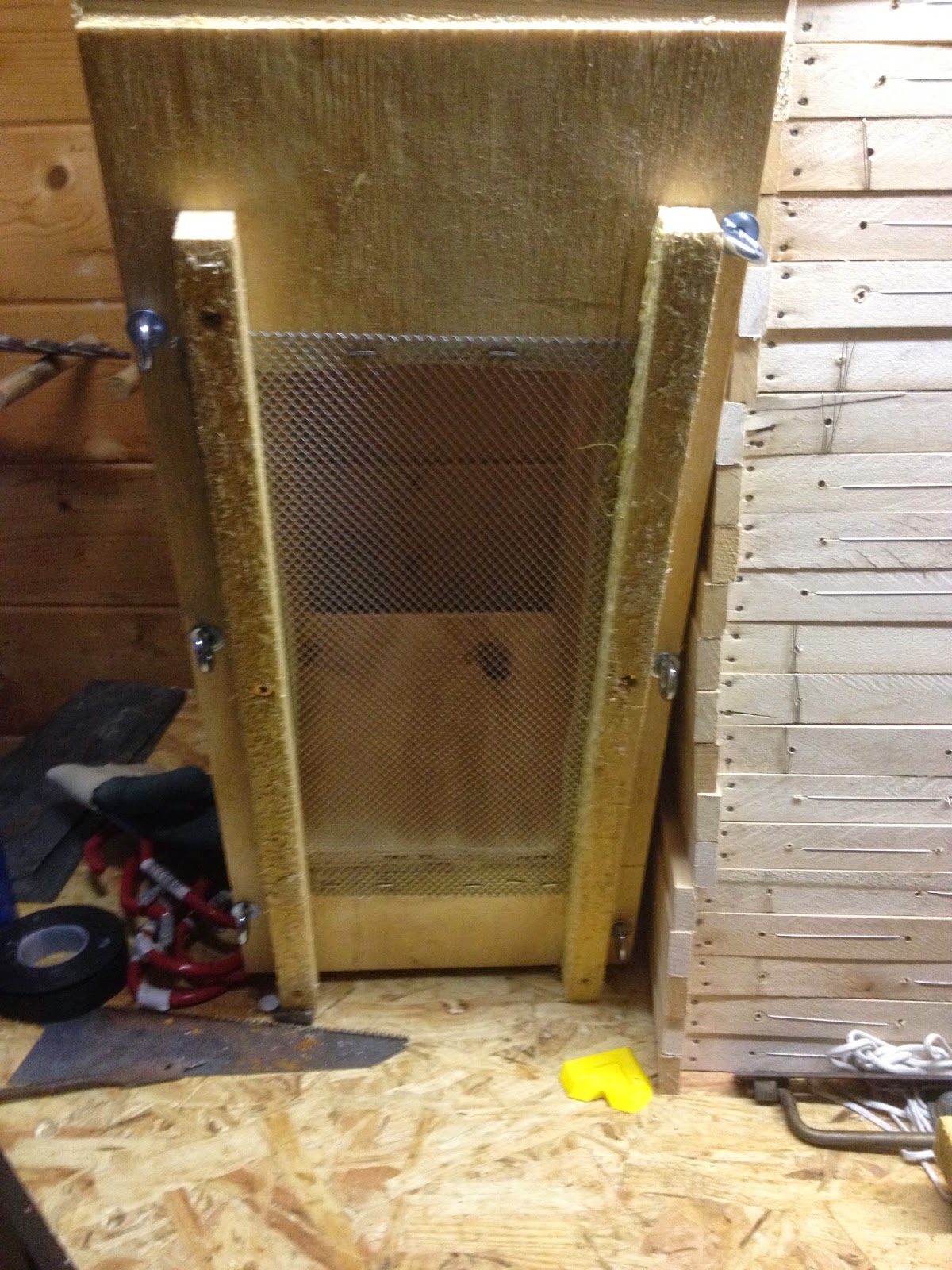 I have also cut out a 30m hole in each end of the roof section. Its closed with mesh too. I really think this will help with ventilation problems. 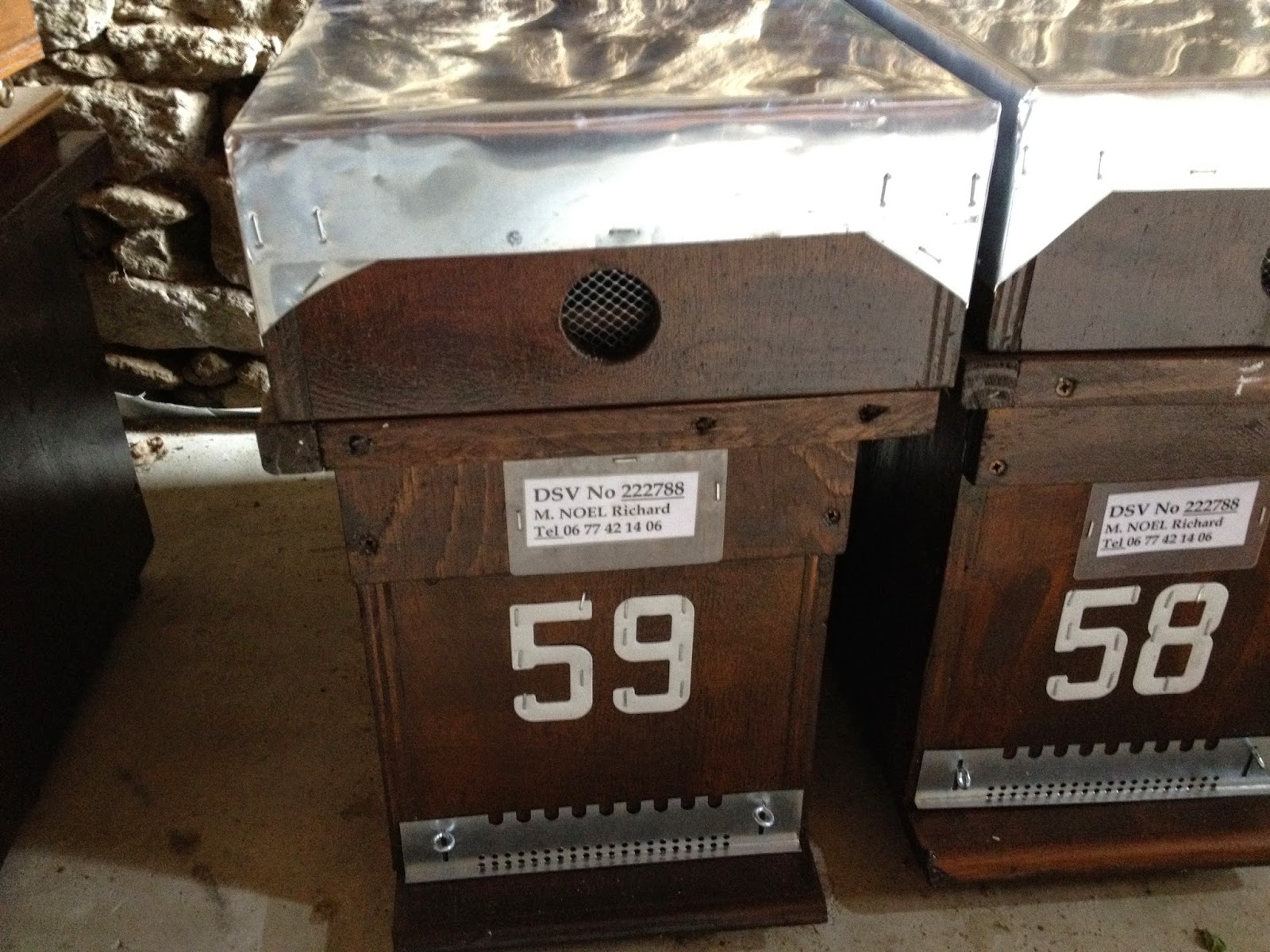 First very early Swarms
First swarm of this year, caught on the 19th April, about a month early, and my earliest yet, hadnt even finished putting out all my traps. Lovely to see. This is the afternoon, following arrival late morning, so I am led to believe.  Classic trap senario with nothing two days before, a build up the day before, then swarm arrival mid morning on a lovely warm sunny day.

Close up of the front landing strip, showing bees fanning and generally dancing around the front of the hive.


In total I now have 3 swarms, they all came within the first week, and since then the weather has gone off a little but i am still very pleased. All 3 have good strong laying queens( now marked), that have layed extremely well following arrival, So should give me honey this year. Two of them can go in to full sized hives next week. 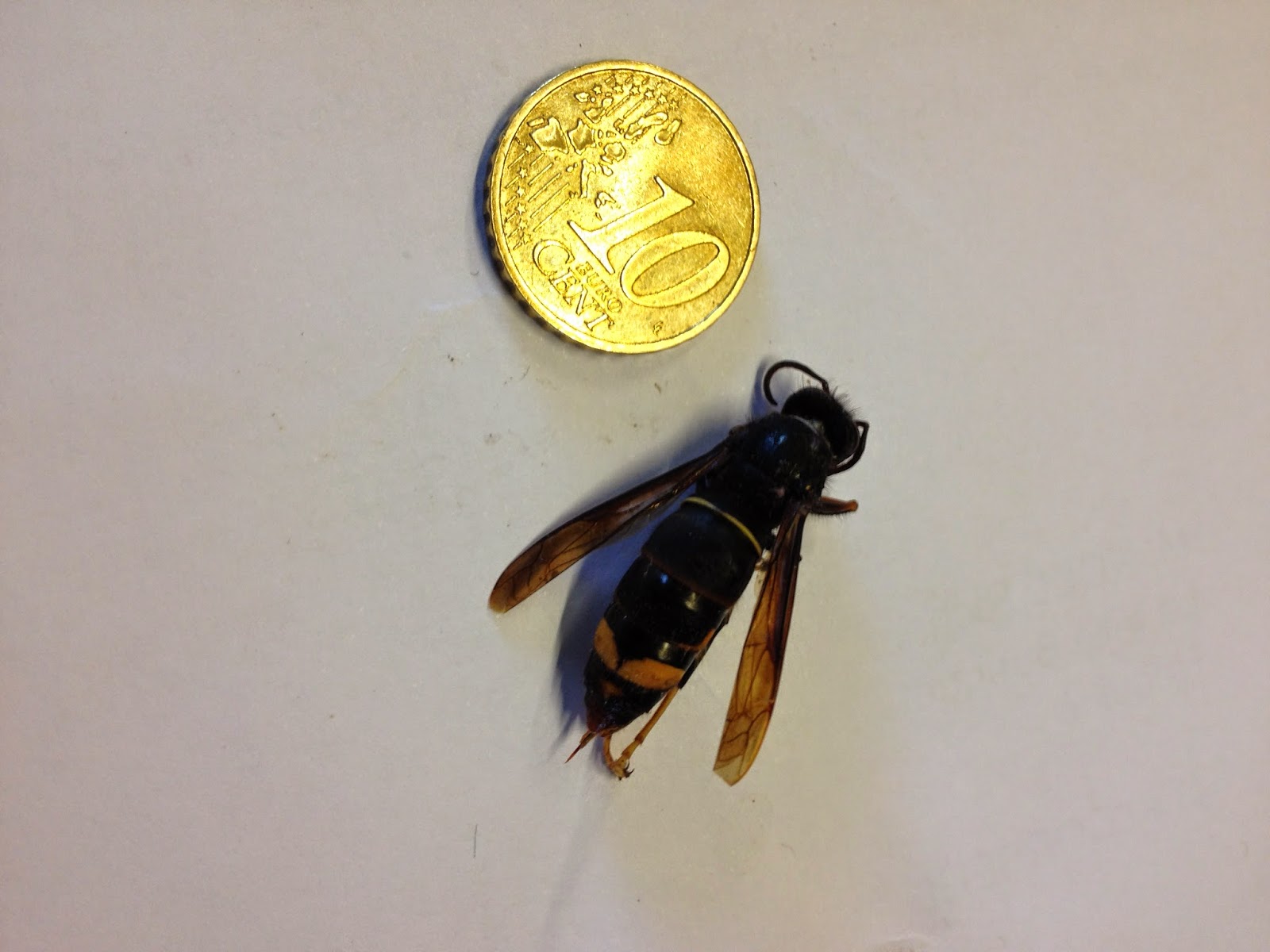 Well Its finally appeared at my apiary, but luckily this one was trapped in my special, beer, white wine and blackcurrant mix. so thats one laying qeen dead. I have doubled the number of traps arond here to try and keep their numbers down. It all depends if one makes a nest near my bees or not.
One can only try.