What a summer we finally had! From the first week July to the first week of September we have seen excellent beekeeping weather. generally light winds, good day and night time temperatures and generally warm and settled weather and i will add , not excessively hot!

My honey harvest was good. From 8 hives I had 80 Kilos, which is far more than i ever anticipated, but not unusual for the amount of hives. The chestnut trees oppened their first flowers, three weeks late but were finished  only just over a week late, meaning the actual peak nectar flow was  probably a little shorted than usual.
Some people have commented that  they thought that the weather was too hot when the trees were in flower, but i totally disagree! We had a huge amount of winter rains that carried on until May so the ground was well stocked up and  despite a relatively dry period before the main nectar flow started, i would argue that the majority of well grown trees had large tap roots, capable of supplying the needs of the trees without  a problem.
Yes i would agree that the flowering period was a little shorter, but thats probably due to the heat bringing things on faster. so it may have been an even better flow than usual but perhaps not as long as one might have hoped for.  Anyone who didnt have a reasonable crop must have been lacking in forrager bees or just not near enough to many chestnut trees! 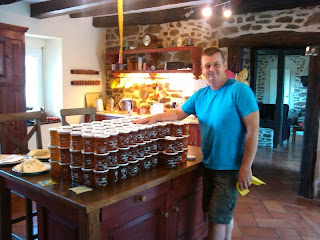 So the chestnut trees finished fowering and suddenly the death started, but as most of you know at the end of the main nectar flow its possible to artificially swarm your honey bees ( with honey supers on the mother hives) and produce bees for free. Thats what I did  in the end had made another 6 colonies for free, all with new queens and all should lay well next year as they all mated in excellent conditions.


Yes I have posted this link before, but I cant tell people enough just how simple this technique is and how wells works in reasonable conditions. I must have looked at it 20 times before I finally , truly understood the method and the reasons why it works. Its such a usefull tool and a lot less complicated than the majority of most artificial swarming methods. You must feed well when artificially swarming as well fed bees peoduce lots more royal jelly, and especially in the dearth always feed your nucs until at least day 6 and for a few days when the queen emerges as she will mate and  be stronger if shes being fed by workers that are well fed!!


I am feeling more cofident with my beekeeping now and this year, 6 days after first carrying out my artificial swarms on those colnies, looked inside all 6 nucs, very carefully, but also to see if each colony had made queen cells. I waited 6 days because that would mean that all the queen cells in production in each nuc would have been closed off while the developing queen cell pupates.  Its interesting beacuse each colony was different. Yes, emergency queen cells in each hive  but all in different places on the frame, indicating how the bees had chosen a larvae in exactly the right time of its development, to change its developmet from a worker bee in to a queen cell.
I was also was able to confirm that all nucs would be producing at least 2 cells, which is a minimum requirement as far as I am concerned.

So with this the safe knowledge of good queen cells, I eased off the feeding and on day 18 I looked in all the hives again to see if I could see any young queens.
In each hive I easily found a young, unmated queen on the boundary line between  the brood comb and the honey stores. They seem to always be in this area. I didnt touch or mark them at this stage. That will be done when there mated and back in the hive laying.
On one Nuc the behaviour was completly different.
No sign of any queen and alot of bees fanning and restlessness. This was exactly what i was looking for, a queen less artificial swarm.
So Immediately i was able to try and rectify this.
My plan was to instead of taking a whole frams of eggs from another a colony my plan was to use a queen rearing frame, graft in to it and then stick that into the colony and see what happends.

So immediately imput in my frame with my JZBZ queen cell cups on, to give the bees time to polish out the cell cups. 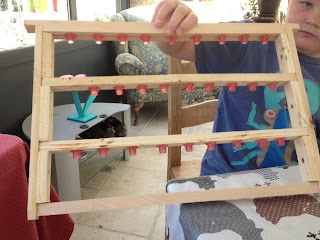 The next day I grafted in to this frame, knowing full well that only 3 weeks after becoming queenless they still would have the instinct to try and raise another queen and if i was wrong and there was a queen in the hive then she would tear down the cells as soon as they were made so whats to loose.

After 24 hours i had a look and too my amazement they had started to feed about 14 of the 27 grafts i had done.
On day 8 i had another look and thay had reduced the amount of graftsdown to 4 queen cells, but for me thats pretty good for a first go. 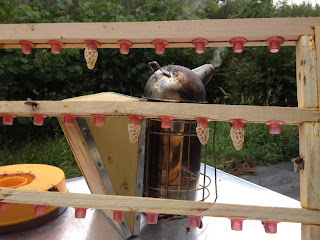 I only need 2 queen cells so i was able to give a couple of cells to one of my mates who had a queenless hive  so that was just perfect for him too! 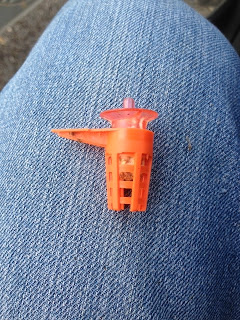 JZBZ also sell 2 types of queen cell protectors that stop any bees taring down the queen cell. as they always attack form the side f the cell and never the tip the plastic cell cover or sleve slides over the queen cell and fits tight to the queen cell cup giving it protection at the top too.

There are two types of cell protector. One that you can sit in between two frames, over a warmed brood area or one like the above, that you simply push in to the brood area as it has a plastic spike on it.
Ingenious  little pieces of plastic. You can see where the queen has successfully hatched out of this one by the neat circular hole thats been eaten around.

you can but most JZBZ parts from the Buzzy bee shop in the uk. The link is www.buzzybeeshop.co.uk


The weather has been excellent until very recently so even though it was very late in the year, I knew there was still some good drones around and they hadnt been kicked out of the hive just yet. Sure enough within another 2 weeks, they had mated and started to lay. so now i have 6 nucs for next year, with brand new well mated queens in.
I will be leaving these colonies in Nucs until next spring. As the dearth is on and  with only the ivy to come in to flower in the next 2 weks, nuc sized colonies never fill out hives and draw up wax sheets in time so there just no point putting a very happy colony in to oversized hive untill the the of march, early april next year.
Have a go at rearing your own queens. Its really easy and a lot of fun. I intent to polish my technique next year and make modifications to one of my hives to allow a queen to exist in the hive but excluded from the queen cells so that the colony can stay queened but also raise queens!!


Have  a look at this link to you tube. If you can follow this, you can raise queens. Modify it slightly if you need to suit your hive, but the practical principals are very much demonstrated and its a really hands on 10 mins of video!!!


Heres how and when to insert queencells in to a queen less nucs.


For next year i have bought a new purpose built frame from my local french supplier that has a feeder tray in built to the top of the queen cell frame. 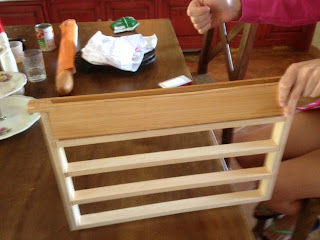 The frame above and a close up picture of the feeder section, roughted out of the  top section. simple but very effective! 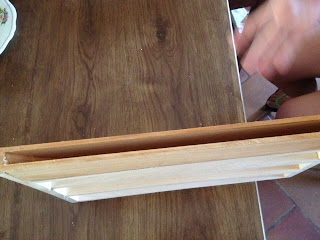 I have already started making up some nucs for next year. as I always say, you can never have too many nucs!!! Happy beekeeping!!! 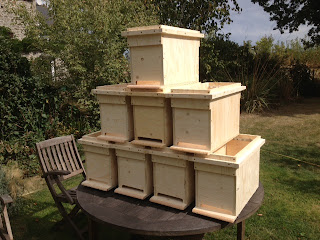