Cut out in Scrignac, Bretagne.

I had a phone call from a home owner who had returned to her holiday home after a 4 week abscence, only to find this upon her return. 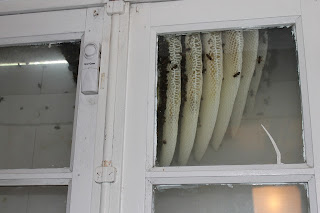 A large, beautiful swarm of bees had established itself behind the shutter, in typical fasion. building comb between the window and the shutter.

Scrignac being 140 kilometers from my house is not usually in my radius for collection, but after looking at the map, almost all of was on motorway. The swarm was in a downstairs window. There was access to right outside the house making it all feesible and a safe bet!

So with my beekeeping buddy Alan, we set off and an hour 20 mins later we arrived at the house. we brought most things except a ladder which was great. the prospect of doing a cut out on a ladder is always much more difficult.
The first thing was to try and acertain just where the bees had attached the comb too, and in this case most of it was on the above supporting lintel. I smoked them and then waited for about 2 minutes, then carefully we opened the rear of the inside window.

You can see how the bees cleared as i smoked the pure white comb. 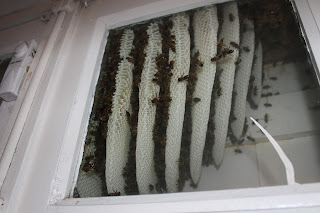 With the second window open it was possible to really get at the comb. they had built around all the shutter fixings. 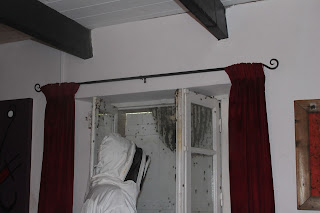 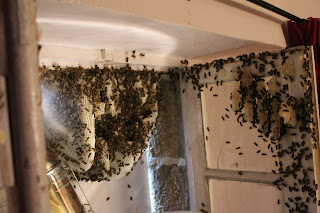 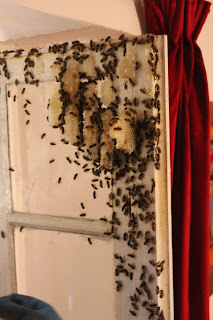 I then went out in to garden side of the nest to find the wall covered in bees, and to my good luck and astonishment, there was the queen sitting on the wall above the nest. 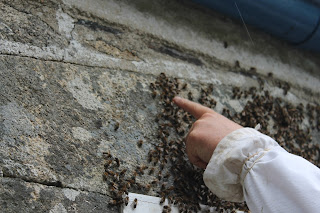 So out with my trusty queen clip and in two seconds she was in the cage, safe and undamaged. Job done! 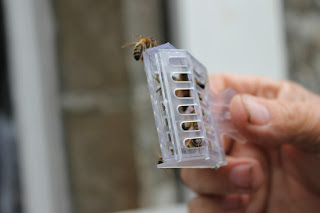 As the comb was so fresh, but contained some honey at the top i had to cut out the lower 3 quarters of each comb, purely because the weight of the honey was so much, that each each seqment collapsed if i tried to hold the whole piece! 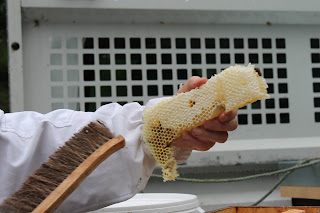 Using the elastic band method on bare frames to hold as much of the small amount of comb as possible. The idea being that if i could get as much of the viable comb in the nuc, the bees might follow. After this section was complete i then put in  the queen (stil in the cage) in between the two sections of comb. The bees would smell her there and hopefully start migrating towards her! 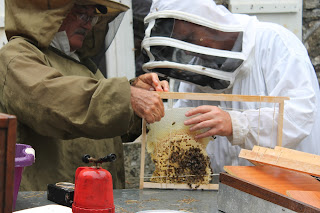 Brood comb sections being placed in to the frames by skilled technicians ! LOL
Notice the handsome one in white!! 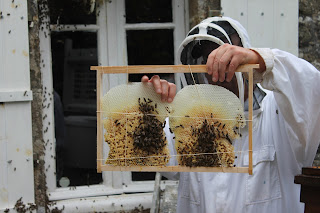 If you zoom in on this pic you can see larvae at all stages of development.
﻿ 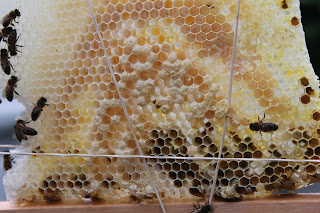 So with all the comb in to about 3 frames, we carefully cleared off all the remaining wax and i placed the nuc box on the window sill, hoping for the same as last years cut out. 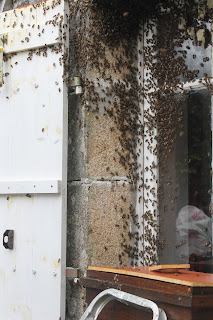 I took a dustpan, brushed a load of bees in to it and simply tipped them in to the box and the rest soon started to make their way down the wall in to the box, not too quickly but all fanning , telling the others where to go. Truly remarkable! JP the Beeman would have been Proud of us!!


The bees were very gently in nature, possibly because their home was not fully grown and they were still in swarm type mode. So this is always a massive help. If they are at all badly behaved, you will get stung and this was the first cut out i have ever done and not been stung! I will be usig their larvae if they survive the winter for queen production next year. We all love gentle bees!!

This was also a great first cut out for my good mate Alan to see and help with! the best way to learn about bees is do a couple of cut outs. You learn about the nest, the proximit of honey and brood patterns, so important in reation to bees in our hives today!


Very many thanks to the home owner Jacqueline, for making the effort to ring us and ask about possible removal. I wish many more would do the same rather than just getting in pest control and killing the lot!! we did this for free and will try and get some honey to Jacqueline. I consider it a privelige to be able to help!
There is sometimes when this is not possible and you always must be realistic in your approach!


The colony is doing really well. I released the queen that evening back in to the nuc and the next morning i placed them in to a full sized 10 framed hive. To be honest i had underestimated the amount of bees in this swarm and they have since drawn up more comb and are occupying all 10 frames.
A good day was had by all!