A week of swarms and hot weather!

I have had an amazing week of swarms and challenges with bees that I have never had before. 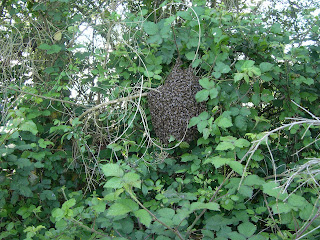 First of all I had a second swarm at my own apiary, A classic swarm and luckily accessible, only 3 meters from  the mother hive and a nice height off the ground.
Easy to deal with and went in to its new full size hive with no problem at all and now seem to be drawing out comb at a rapid speed.

On wednesday morning I went down to Ereac ( about 45 mins from Corseul) to collect a bautiful swarm that had appeared in a garden the evening before. I was there at 8 am in case the swarm moved on and when I got there  was luckily still there. 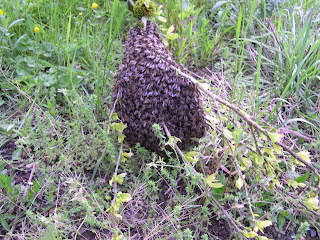 The swarm was on the branch of a  hybiscus shrub and as you can see the weight of the swarm had caused the branch to bend over and touch the ground. This was not a problem and knowing that the bees had been there all night and were quiet I simply  cut the branch off (with the kind help of the property owner) the branch and simply placed it on top of the Nuc containing 5 frames . 4 of plain wax sheets and 1 of drawn up comb that had all been sprayed with sugar solution. 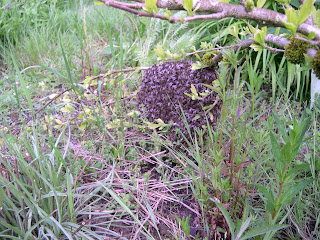 They seemed to be happy with the home I offered them. They soon filtered  in to the frames and then started Fanning on top of the box and also on the front landing strip. 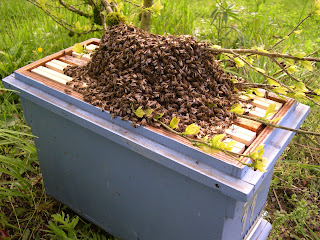 Then slowly I closed off the top lid, causing them to revert to fanning on the front landing strip and the majority of the remaining bees then were called back in to the hive. 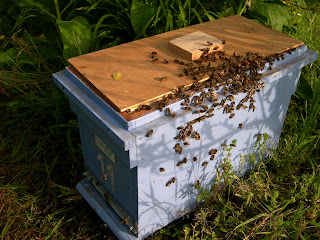 The weather was hot  so I had to be quick. You have a dilema! Should you come back that evening and collect the hive when every single bee has returned to the hive and also run the risk of the whole lot absconding during the day or do you cut your losses and chose the right moment and close off the front.
Don`t  forget that when you put the frame over on the temperatur will start to rise to you havent got long before they may find it too warm. 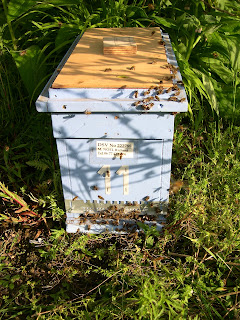 I think I lost about 20 bees but all was well. I drove back to the apiary and left them there for about 15 mins before opening the front door and letting them out. They were so well behaved and simply in and out for a while before settling down.

Well I said I had been an amazing week. On my way to work after collecting this swarm I flew in to another swarm that was passing over the road I was on. Luckily I was not going to fast and immediatly adjacent to me was a small lay by, So I pulled over and took up the chase!.
I went through 2 gardens and 2 fields and simpy ran with the swarm. Its an amazing experience. The swarm stopped a couple of times , paused over a couple of buildngs, obviously not choosing each place as a possible resting place, and then moved on.
We got to a small valley and they simply vanished in to the top of some large oak trees and they were gone!
What an experience I will probably never see that again.


Swarm arrives at a swarm trap


With the weather being perfect after about 2 weeks of cool and wet the potential for swarms is large.


I checked this trap as I was passing the garden on the way to see another client. On the way back this is what I found. 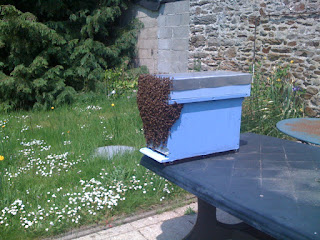 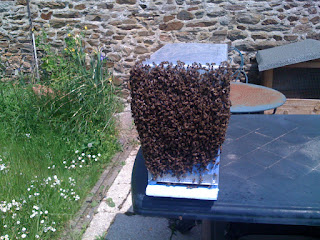 The big question was, why was it on the front of the trap and not inside. I was perplexed. Usually some bees arriving at a trap would  gather around the front of the entrance, or even virtually cover the trap, but they would  gradually move in to the trap.

I phoned up my beekeeping teacher who at the time was also up to his eyes in bees, told me that they may well go in on their own but it may take a day but if they don`t go in to the hive by the following day then I should take off the top of the hive and try and coax them like that.. So I left them alone and took some Pics for the album. I came back that evening and  they were even more clustered above the entrance. So the following morning I decide to try move them in. It was nearly a costly exercise. The minute I took of the lid and started brushing some of the bees in to the box, the bees initiate a mass take off. What a sight. The whole swarm was in the air and circling the garden. They went over the garden wall  and then came back and very fortunately, settled on a shrub in the garden. Again I was extremely lucky. They had chosen a lilac shrub about waist height.

So what next, Well I also had my swarm trapping box with me so that was my next weapon of choice. It was obvious they did`nt want to go in the Nuc that the scout bees had drawn the queen and the rest of he swarm to.
I waited until they had all settled and then put the box underneath them and gave a large shake and the majority went in. Then closed off most of the bottom door, leaving access and slowly turned over the box and put it on the ground. 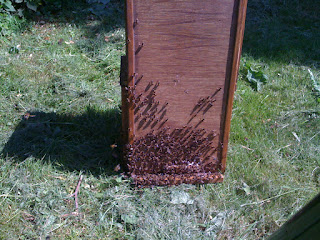 Bees appeared at the front fanning nicely. This time the queen was in the box and at the moment, happy to be there. I closed off the box and lost about 10 bees but thats nothing to loosing a beautiful swarm!
I transported  them to the apiary and used the white sheet method to give them the sense of walking in to their own hive. 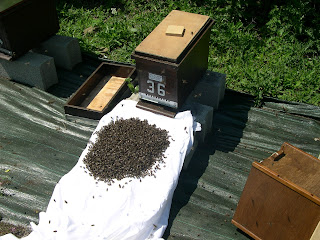 So I set up a ramp leading  up the the nuc box and I have chosen a nuc box because i felt that the size of the swarm did not merit a large hive and in this sized box it would probably get away quicker!
I tipped out the bees on to the ramp and just let them decide what they wanted to do. 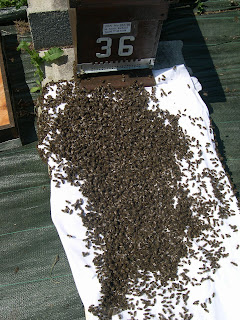 They all climbed up well, straight in to the box 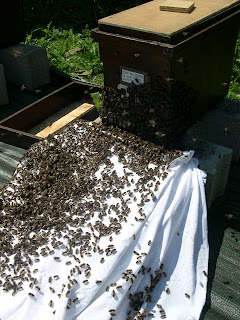 To cap all this activity, when I was pouring all those bees on to the ramp one of my nucs started swarming. It spewed out bees for about  2 minutes and they all took to the air in a  amazing spectacle. They headed off in to the nearby scrub so I followed them from a distance. Fortunately I was had another nuc spare at my apiary which I grabbed and ran with.
They settled after about 5 minutes on to a gorse bush. It was a good size swarm for a nuc box and I just took pot luck and just shook them off the bush straight in to the nuc. They immediately started fanning and going in via the front landing strip. I put on the lid and walked them back to the apiary where they are now installed. What a week! hope this weather continues like this. 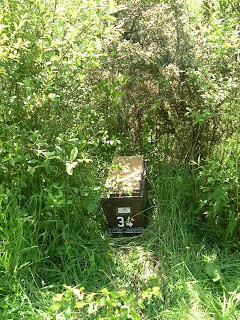