Swarm at the Apiary and cut out.

First swarm of the year.


I drove past my hives yesterday to find this lovely swarm hanging from a small hornbeam shrub in front of my hives. I can only assume it has come from one of my hives but I have artificially swarmed all of them recently and only found open queen cells in one hive so I am really confused as to where this large swarm has come from and also the volume of bees it has come with. The obvious thing to do was to put it straight in to a hive and because of the volume of bees I have decided to put it straight in to a 10 framed hive. I also had some spare frames from a hive I lost in the autumn so they instantly had comb and some honey on these two drawn up frames.
All went well and I managed spray most of the fames with sugar sirop and to get the hive right underneath the swarm, gave them a really good shake and all fell on to the top of the frames. I then watched as they all started filtering in to the frames. 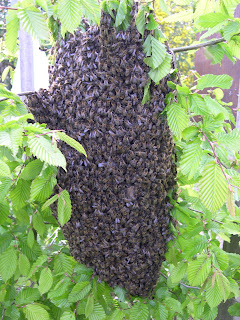 Lots of bees then started fanning which usually says" come on in its ok to all the other bees or you can also have some comfort that the queen is likely to have been transfered in to the hive but its never a done thing thing until you see eggs laid in to cell. All seemed to be fine as I had to go out later that after noon to do the cut out described below so I left them in peace with a hurriedly put together feeder and a full load or syrop.
So later that evening and nearly dark, I drove past with another colony of bees that I had just cut out and there they were all again hanging on the same hornbeam shrub. This is typical of swarms, typically unpredictable!! They can look all well and happy in their new come and then they abscond.
Fortunately they moved back on to the same place as before.

So What to do next?, well back to basics but as it was dark I simply just took the hive and put it back underneath them and left it there for the night. I came back the next morning and the weather was drizzly and colder but they were mostly all still there but with a few more of them were inside the hive and using it as a half way house.  I think one can assume at this stage that he queen was there, somewhere, as on the rear on the hive worker bees had started to draw up comb overnight, it was  also on the hornbeam shrub as well. It was obvious that thats where they wanted to set up home.  So later that day I had another idea.
I got hold of a white sheet and a board and as large plastic tray. I then carefully moved the hive away from the swarm, back to the place it was the previous attempt. Set up the board as a ramp in front of the hive and the covered this with the white sheet. I then took the large plastic tray put it underneath the swarm and gave the shrub a really good shake. All the bees then fell off in to the tray with very little flying around.  I then simply lifted the tray over to the ramp and then tipped out all the bees out on to the middle of the sheet.
Immediately they started marching up towards the entrance and in to the hive, one  by one stinger to antenna, with a good few on the ramp fanning  and calling the remaining up in the the hive.

Within 20 minutes they were all in. It`s a really natural way to hive them and I think it has given them the feeling perhaps that this time, they have chosen their location themselves. Its almost as though they needed a bit of time to decide for themselves what they wanted and where they needed to be.
The next morning all is well. They are all still in the hive and all looks good this time.

The previous evenings cut out 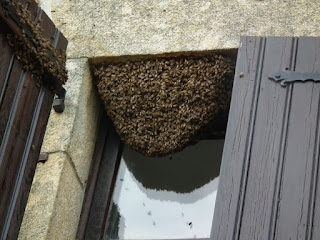 This is what we found when we opened the shutter of this property, a beautiful swarm that seemed to have arrived about a week before.  Luckily they had built comb  only to the top of the wall at this stage. Another few week and the whole thing would have been a lot more difficult. 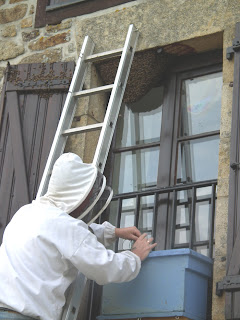 So I my plan was to try and cut out the comb,  try and place it in to some frames and then I was banking on the fact that after this the majority of the colony would then sense the queen and comb were not there and follow their senses and move down the wall  to the new position of their  home, and thats exactly what I did. 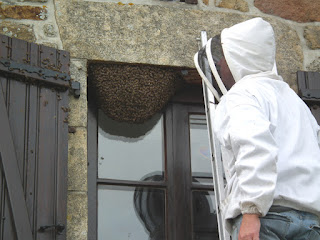 With any swarm the first job is to assess the state of the swarm and the behavior of the bees. I knew they were only recently established  and at this stage they have very little to protect. Their queen usually has not started laying until about now and there`s not much comb to deal with. The bees seemed very well behaved. and the weather had actually turned out fine for the first time for a long time. This always helps. 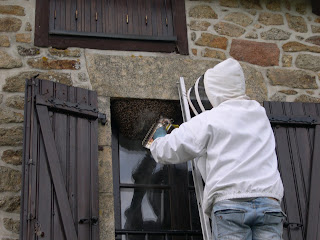 I put a nuc box on the window sill and tied it to the railings. this worked really well and meant I had free hands to do the cut out. So First thing was to smoke the bees a little, this will also help ascertain their mood.
I thought it would be better to smoke the right hand side first, as that way I could remove each section of comb one by one and hopefully find the queen if possible. This is rare but I put a queen holder in my pocket just in case I saw her for a few seconds. 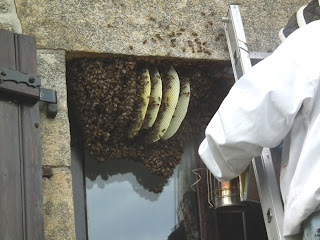 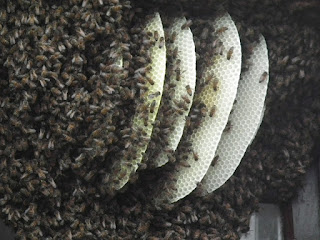 I made up some Dadant frames with some fairly taught rubber bands around them. Each time I cut a piece of comb out I simply lowered it in a frame and slid the bands across to hold them in position. On the third piece of comb, I remarkably found the queen, grabbed my clip and she just walked in. How lucky was that? This was actually the middle piece of comb that she had just started laying in to, as there was some 50 tiny white eggs in the centre of the comb. So I had the queen. At this stage, provided she is not damaged most cutouts  are easy. If you loose a load of bees its of no real consequence as long as the queen is safe she will commence relaying within a few days  and then the numbers of bees will soon build up again but its always best to get the maximum amount of bees possible so the colony can re-establish as quickly as possible. Loading the comb sections in to the hive (shown above)

One last section to cut out, but this had no eggs, pollen or honey . Its interesting to note that if you look behind the ladder, on the under section of the granite lintel, you can see the previous position of the existing swarm that was there 2 years before. They are known to swarm to previous positions! QED 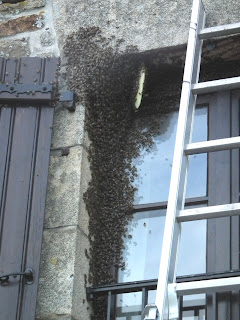 At this stage I was not sure what was going to happen. Was there enough swarm pheromone in the queen to get all the others to follow her in to the new position. I left her in the clip but placed the clip in to the hive and hung if on one of the frames. That way the other bees knew she was present. Its during a cut out that you may be better off with a bee vac and if I had left it another few days more before I  tried to remove this colony then they may not have been so easy to remove them.  Quite remarkably they just walked down the wall, in to the nuc containing their existing comb and queen.

All comb removed and a very little smoke to move them on their way. 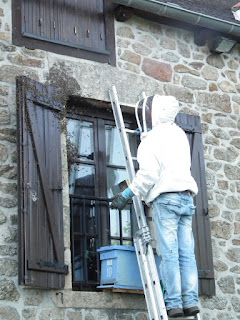 Bees marching down the wall! 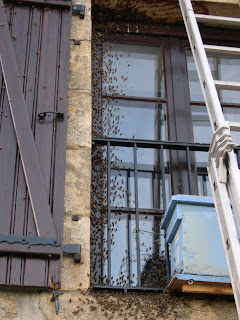 A bit of a mess here but generally all moving towards the front of the nuc and marching in. 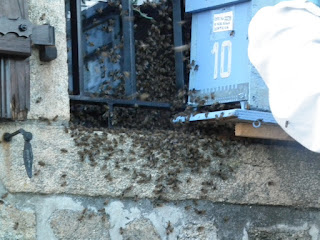 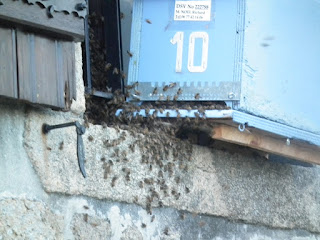 The last bees move in. 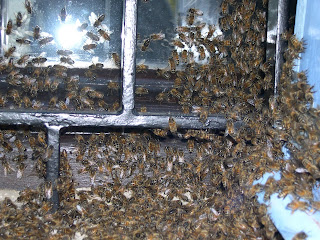 You can see some of the bees fanning with their bottoms in the air , producing the nasanov pheromone from a gland under their wings. The fanning of their wings sends this up in to the air, calling the others in. This is one of the most beautiful things you can see in nature. The smell is quite overwhelming! 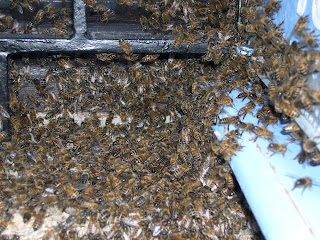 Within another 20 minutes they were all in. I simply closed the front lid and we had our colony.
I then transported them to my apiary and let them settle for 10 minutes and then opened the lid and let out the queen in to the colony. Job done!
The next day I actually transfered them straight in to a 10 framed hive and also gave them a bit of brawn up comb to help the get their colony up and running faster, needless to say a feeder as well.

Amazingly in less than 24 hours of their arrival at chez moi, they had started building comb to the top of the frames I had placed their original comb in to. They are obviously happy and just want to get on with re building.
I have done a video of this whole cut out but it needs some editing. As soon as I can I will post the link here.
Many thanks to Miranda Bell     http://jardinmiranda.blogspot.fr/      firstly found this swarm and secondly was the only person to get stung  while filming and taking many photos but it was an accidental sting as a bee had gone down her glove when she removed it. Thanks Miranda.
22 May
Heres some footage of the bees moving in to their new home I only have included the final few minutes at this stage but it gives you some idea of the noise and volume of bees  http://youtu.be/s8XWq6ZtlqY