Well the weather has been exceptional for the bees over the last few days here in Brittany. Apart from the cool mornings  with some low mist, we have had daytime temperatures of 20 degrees. For March this is exceptional. The weather has also been calm making the job of flying a whole lot easier.
There is also a huge amount of food availible. The Salix I talked about a couple of weeks ago is now at its peak, with other trees like sloe (or blackthorn) starting to flower.. For the bees spring has sprung!

Yesterday I has finished work a little earlier and took the opportunity to transfer some of my overwintering nucs, to brand new nucs. The reason for this is simple. I needed the old nucs for swarm traps this year  and have plenty of new spare nucs but not enough old smelly nucs that are gummed up with propolis and have been well used. Thats whats more likely to attract a swarm.

All of my nucs are 5 framed Dadant, so the transfer was very simple. The weather being so good meant I needed very little smoke from my smoker. The bees were in an exceptionally good mood, with not a single attempt to sting ,which makes the job a whole lot easier.

My method is simple and traditional. I move the origional nuc of its stand and put it foreward  by about 1 meter on the floor . I put the brand new nuc in its place and then turn the old nuc around and rest the front lip / landing strip on the other nucs entrance allowing a clear passage of bees not transfered on frames, to walk in to the hive as nothing had happened.

One thing to note is you should always keep your frames in the correct order even if you are transfering in to a larger hive from a nuc. An upset in the brood pattern can cause the queen to slow laying or the colony to stop working as well, until things are re aranged. This is damaging to the spring build up and should be avoided at all costs.

I also always start removing frames from the side of the colony that has  the least amount of brood or drawn up comb. A nuc in early spring may well have only the two centre frames completly drawn up and the two or three surrounding frames are sometimes incomplete allowing you to use this to remove the side frames first ( whichever is the smallest) and allowing you room to ease the middle frames apart carefully and not just yank then  up and out from the middle damaging the colony, bees and Queen in the worst case senario. ( and above all really hacking them off!) The general numbers of bees this time of year are low but  now on the rise. This year it will be another 3 weeks to a month before they are ready to be transfered to normal sized hive .

All of my colonies have nearly doubled in sized since I last treated them ( nearly 2 weeeks ago)  but there is still a long way to go. We are forecast cooler ( more normal) weather for the next few days so I think we will see a rebalancing of things weather wise!  The bees wont be bothered too much. Looking at their frames yesterday theres plenty of pollen and nectar/ loose honey stored away in preparation for a cooler spell.

What we will need more of is rain. We are already in a period of drought continuing from last year. We had some winter rains but nothing like we should have had. Normally we get regular amounts of rain until june but this year, like last year looks as though we are going to  see a repeat,.  Good spring build up with good weather and plenty of spring honey( but most of thats oil seed rape)and hardly any summer honey that crystalises in the frames, (due to lack of moisture) between mid june to mid july during the flowering of the chestnut trees.
Because of this I am going to take a bit of spring honey this year, just in case I end up with nothing at the end of August but I must not be too negative. Its still only march and there is still moisture in the soil. All to often  we see this pattern and then it stays wet for months!

Regarding that nuc that was queenless and noisy during my last visit, well its good news. There is a new queen ruling the roost but no eggs yet! The bees had completly changed  their behaviour, I found her hiding on the last frame I transfered in to a new nuc. She was not as large as most queens however there a lot that could attribute to that. She may have only just hatched or not completer her mating yet. She may also not have found enough drones to mate with. I will leave her another 2 weeks and if she dosent start laying I will combine the colony with another 5 framed Nuc, in to a 10 frame colony, which will give a good sized colony very quickly in time for some spring honey. The two queens will find each other and battle it out untill one remains. The  strongest remaining queen will then reside and  quicklyget egg laying under way!


Queen bee on frame about 2 cms in front of my glove. 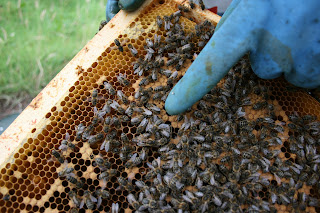