Finally managed to get in to my hives today. The weather had been really poor for the last few days making the second and third treatments against varolla mite difficult to administer on time. Its better to treat  3 times every 7 days to break the cycle of the mites as the young mites hatch out. Well thats the theory. Unfortunately spring weather is very unpredictable here so the remaing 2 treatments were 9 and 10 days apart but the numbers of brood were low so hopefully it will of had the required effect.

Something to note was when I opened one of my nucs that was a swarm from last year I noticed that it sounded different to the others. It was much noisier which in my experience can be one of the signs that the hive was queenless.
Indeed it was! . On quick closer inspection there were no eggs or larvae but still some brood on three frames which must mean that the queen died (stopped laying) about 2 weeks ago or just after my second treatment. fortunately the bees knew this and immediately have constructed 2 queen cells ( in the middle of the frame) and have sealed each queen cell. Hopefully with warmer temperatures for the next week this will precipitate a sucessfull hatching  but the real problem ahead is that as it is so early in the year will there be enough drones around for her to sucessfully mate with? Time will tell. I will leave them alone for another 3 weeks and see what happends!! 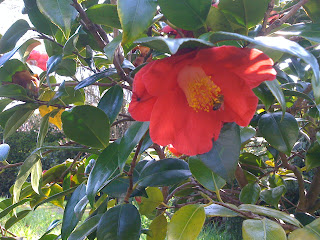