Michael Palmers Apiaries My visit in Pictures and Video. 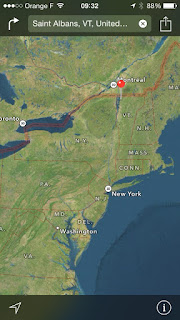 Well, if you havent been to Vermont before heres the location. French Hill Apiaries is located right up in North Vermont in a small town called St Albans. Its approximately  30 miles from the Canadian border and is just on the east side of the Champlin Valley. 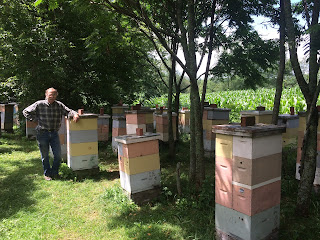 Mike Palmer next to his twin Nucleus colonies.

So why go all the way to Vermont?

I have followed Mike's methods of teaching "sustainability in the apiary," ever since I came across one of his presentations at the National Honey show in 2013. His talks, now world renowned are all available on this link: https://youtu.be/nznzpiWEI8A  and if your a budding or experienced beekeeper then I can assure you will learn something from them. There such a wealth of information, you pick up extra things each time you watch them. 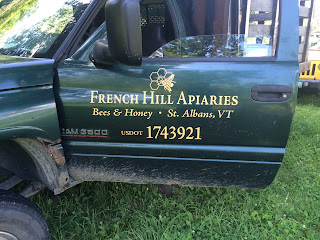 The Works Truck, typical pick up, designed to take a lot of weight!! 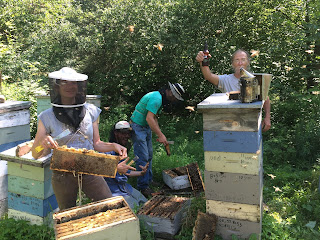 A typical day in July. Finding the queen, ispecting and assessing the colony and requeening if necessary. Mostly through a push in cage if we killed the old inferior queen, or using  what we call a three hole cage with candy plug if the queen had been absent for a while. 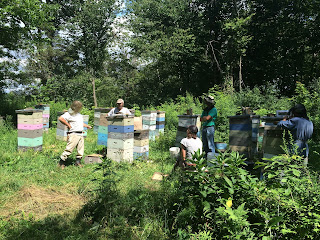 The crew at work. All working together when necessary. 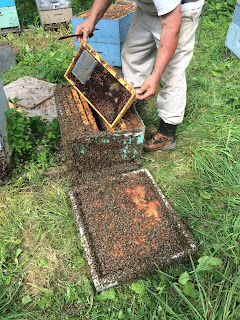 Cork Inserts a new queen under a push in Cage, amongst emerging brood and nectar.
The brood emerges and only knows the queen, they immediately start feeding this new queen, she starts laying. and then becomes acceptable to the existing workers and in four days time the cage is lifted off to reveal, under normal circumstances a queen, that has laid up the entire square underneath the cage. I will explain this method more further down, with a video that I took of Michael preparing a queen and putting her under a cage. 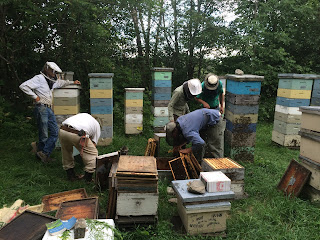 If we cant find the queen, we shake the entire colony through a shaker box, with a queen barrier fixed to the bottom of the shaker box. That was you always find her! its possibly more labour, but sometimes you look and look and look, but you just cant find her and you've wasted half an hour and you still have not found her!! 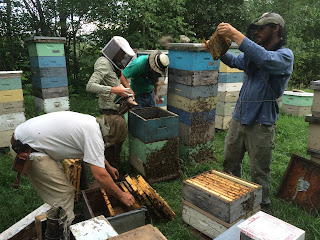 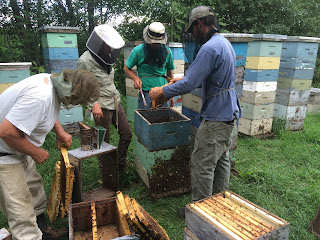 This way you always find her, working together here, but usually two people is sufficient  to find her! dont forget that this time of year, the colonie numbers are at their maximum so theres a lot of bees as you can see.

I have included a video of the whole process. Lots of info here!!
.

I had missed the last grafts, but i was lucky enough to see Mike harvest the last batch of queens from his gigantic cell builder colonies. I mean WOW, just look at the size of these colonies and those beautiful queen cells. we put these cells straight in to  queen less nuc boxes that morning.


Just look at the amount of nurse bees on those cells!! 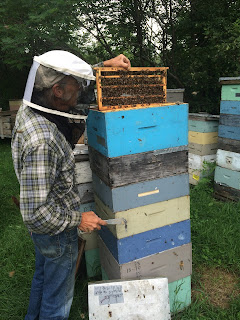 Excellent take on the last round of queen cell grafts!! 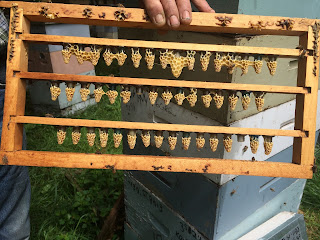 During the later part of my week we switched from requeening to urgently give nucleus colonies more space. These were nucs that Mike had made up during early summer that desperately needed more space. We added 3 combs and one foundation to the middle of the 4 over 4 configuration, giving the bees more room to ventilate and hopefully reduce the swarming impulse. Swarming in july isn't really a problem in Europe, but in North America it can be a real issue as the bees only really have 6 to 8 weeks to build up again before winter, so its tight!

Mikes apiaries are all situated around the north east, north and Northwest of Lake Champlain, the scenery is beautiful. 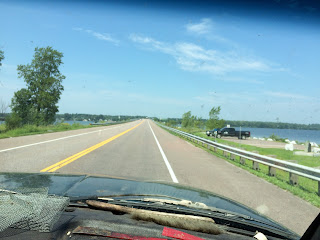 Crossing the bridges between the islands of Lake Champlain. 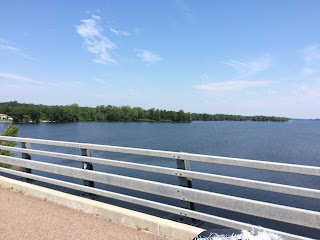 Really close to the border between New York State and  Canada 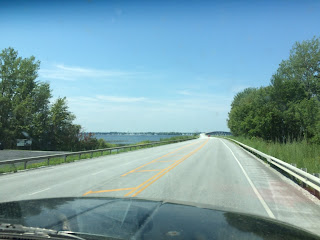 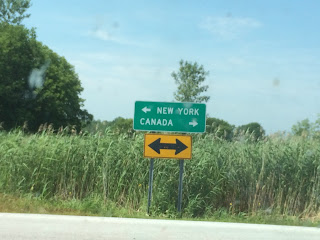 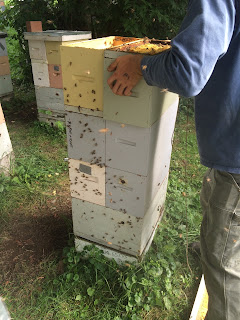 Mike has colonies of bee he calls his "sustainably nucleus colonies".  He has two colonies, side by side, with the entrance at the base of the hive but at opposite ends, then theres no confusion for the bees.
He finds that the four, over four, over four configuration of Langsdroth frames work excellent all year round. Temperatures in the winter get so cold, often colder than minus 25 degrees C. The snow gets so deep you sometimes  need a spade to find the hives. But usually theres a contant 1 to 2 feet of snow on the ground. Hence all Mikes hives have an upper chimney that allow the bees to ventilate and get a cleansing flight if the weather permits, as they have permanent access to the outside. 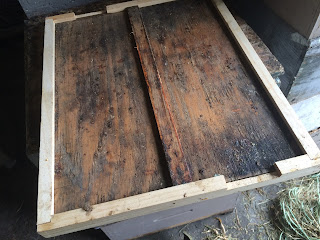 Typical base of the Nuc box colonies, you can see the the opposite side entrances. On top of this goes the first brood box, which is a standard sized brood box with a division board between the two. You can see where the division board (in the brood box) sits by looking at the base pictured above.
On top of this after the brood box, goes each individual four frame holder. Some two box nucs configurations actually have one side with say 8 frames and one side four but an additional empty box can be placed on the side with the lease frames in, to bring up the level, so the roof still sits on both. Its very ingenious and above all the bees share their heat in the winter and the do what they love to do, go up!! Its the natural way that bees go. Imagine bees in a natural cavity of the european honey bee, its a tree trunk!

One of Mike's Large Nuc yards, north of Lake Champlain. This one has to be protected year around from black bears. They love honey too and can devastate an apiary in a few hours!!
You can see we  were adding comb to two over two framed configuration, where their bearding due to growing so well that they have run out of room and also it was stinking hot!! 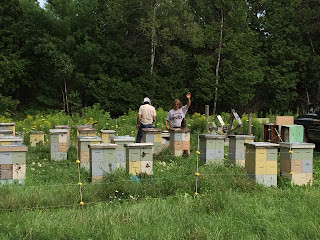 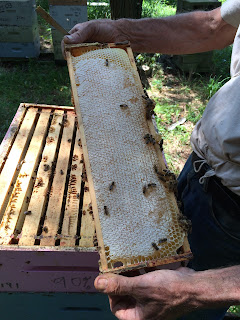 Mike also showed me the special supers he has made to collect  cut comb honey. Although not a huge part of his sales, Mike sells one of the finest cut comb honeys in Vermont. The pink boxes are put on a hive during a flow, so that good quality, soft , fine wax is used during the nectar gathering process. the result being the most delicious comb honey!! 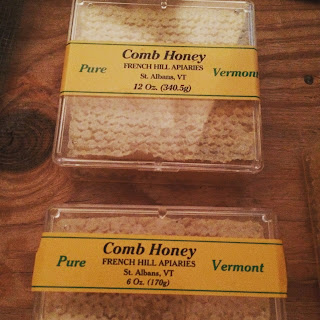 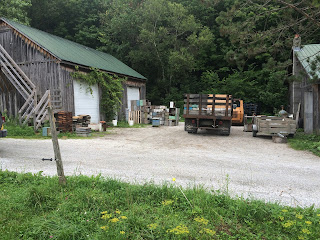 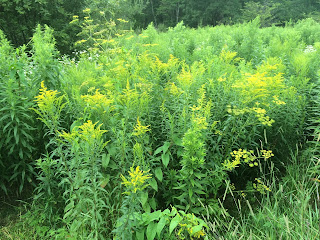 Golden Rod , Just coming in to flower as I left for trip back to France.

This is the  biological brush cutter!! reliable and quiet!! Her Name is Meat!! 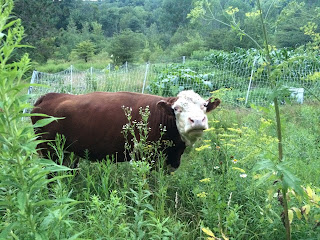 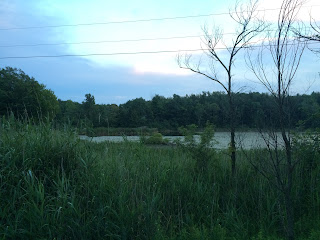 The lake at the bottom of Mikes garden, has its own beavers together with dam!! 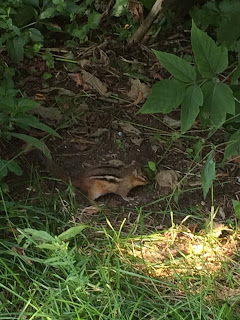 Ground squirrels are often seen around. These are delightful creatures and often are seen around mikes hive. this one was just waling around whilst we were working!! 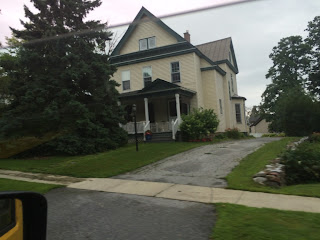 The Highstreet in St Albans 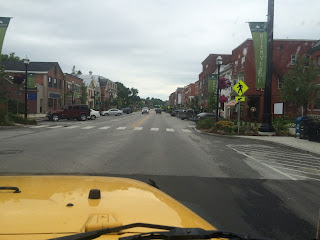 My Taxi back home. 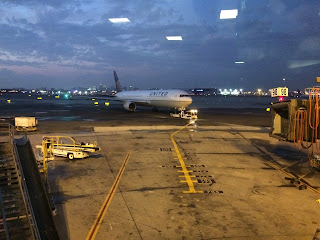 What more could I have wished for. A absolutely fantastic and unique visit, where i learnt so much in my week away. Mike and  his family were so hospitable! Thanks to everyone , you were all so welcoming!!
I hope to return soon, but next year i am planning a trip to the uk to visit other apiaries and friends i havent seen for a little while. I will definitely be visiting Vermont soon.

On with the winter beekeeping and back to reality!!