After what one would describe as probably the wettest winter on record and certainly in my lifetime, we can reflect on how bad its been but at the same time be a bit thankful that at least its been mild, very mild the entire winter. I think I can remember a few early frosts in Novemer time, but our old friend the north atlantic drift has protected us from severe cold weather and has instead fuelled sucessive severe winter storms via the very strong  south westerly jet stream.

I went in to my hives last week. The weather was very briefly sunny and quite a lot of my bees were flying, with no wind. In summary it was good news. One colony completly dead with only dead bees and remarkable, a marked dead queen. Another colony with no brood and eggs and queenless, with not many bees, so therefore thats dead too. I will leave the mouse guard up in April and allow this to be robbed out so i can have spare frames for my swarm traps. 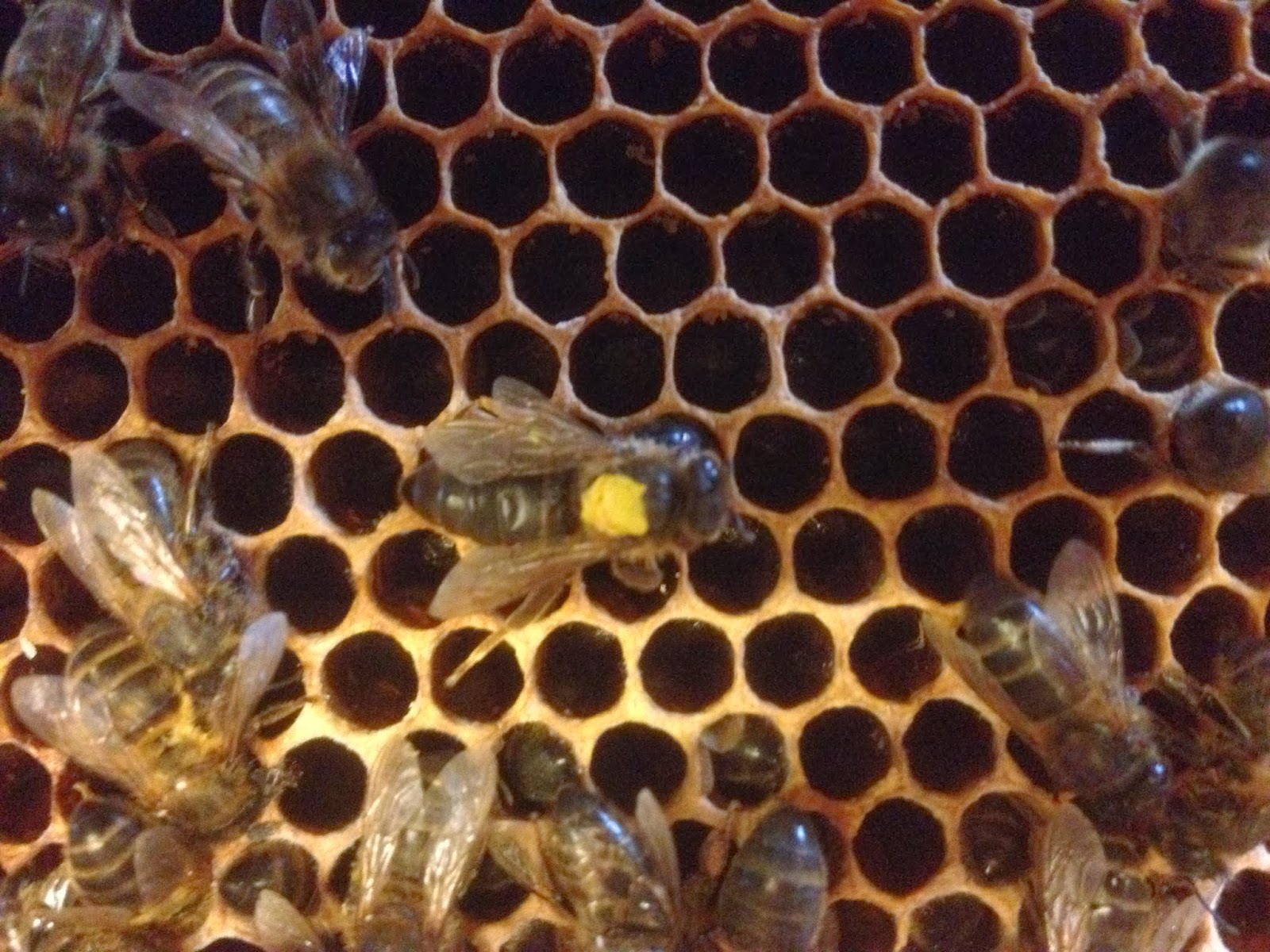 Clearly this queen failed to lay, the numbers of bees declined and the slippery slope of colony collapse is evident here. I imagine that this colony has been dead for a while. Tt took all its autumn feed and was laying well, so it looks like it failed to lay down or manage sufficient stores.
You can see the bees in the picture beneath. They have died in the clasic position, with their heads in the bottom of each cell, in a despeate attempt to lick out and remaining sugars. 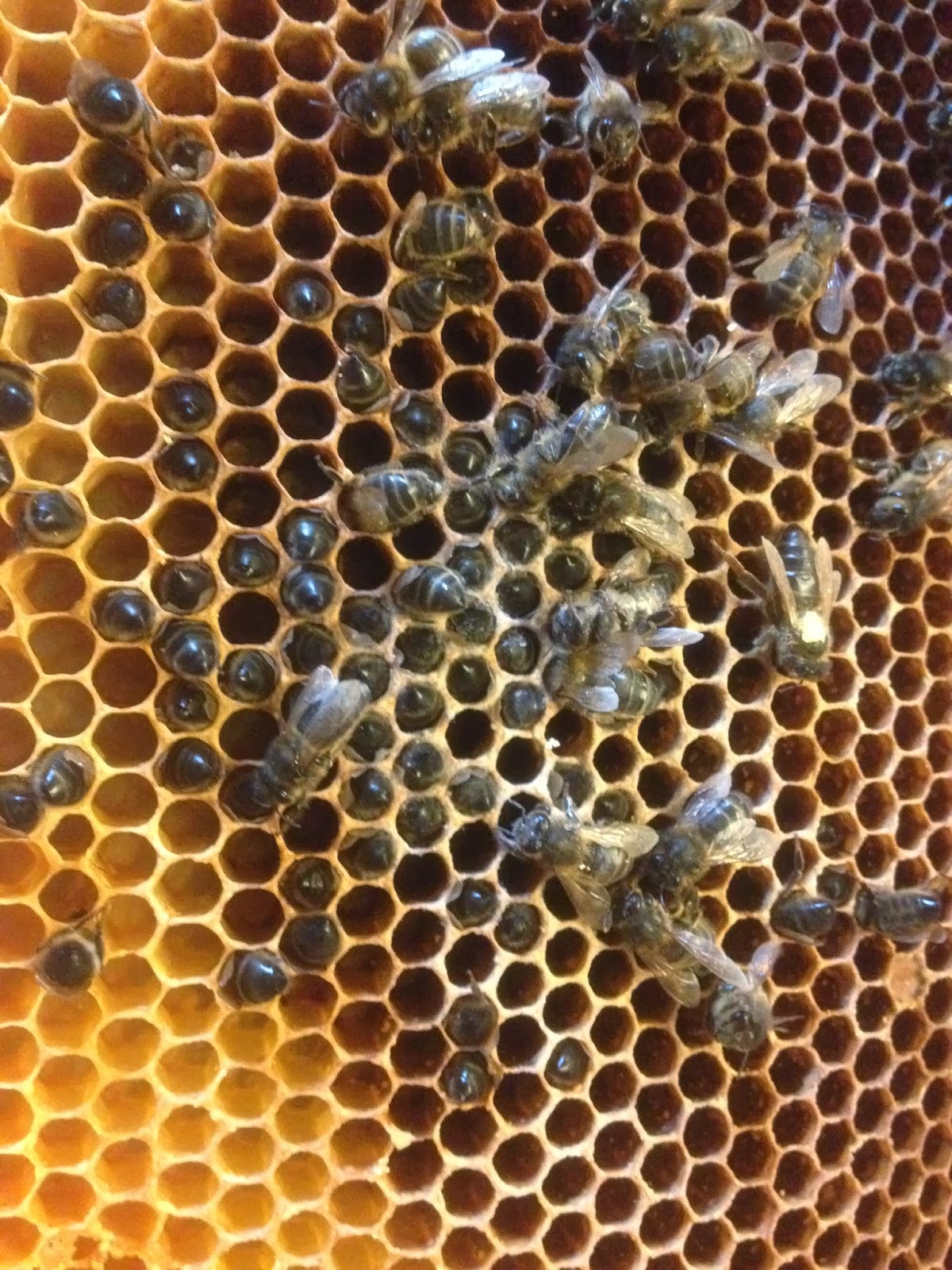 All ready for the spring feed. I have been buying sugar from my local supermarket for the last couple of months, a couple of bags each trip spreads the cost. It looks like spring will start next week, with temperatures rising to the dizzy heights of 15 degrees, so i will be giving each hive, half a litre of sugar syrop, each week for the next 3 weeks. This should help stimulate the queen in to laying more, so thoretically assisting the spring build up. 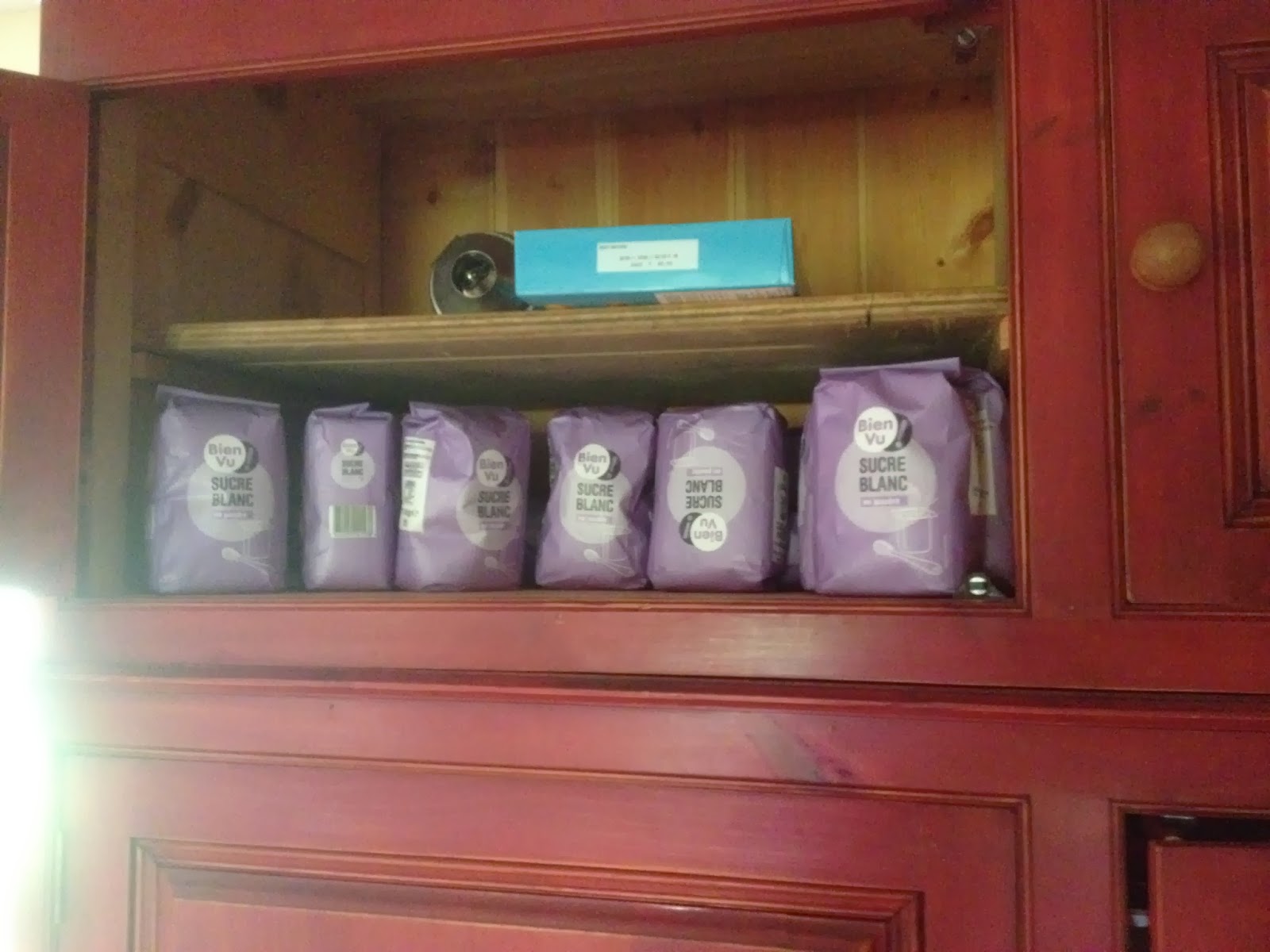 All frames ready for the off. Spare frames for the swarm traps. I like to put in at least one very old, smelly brown coloured frame in the middle, with at least two half drawn up frames either side of this.
The two outside frames, just new undrawn out wax sheets on new frames. 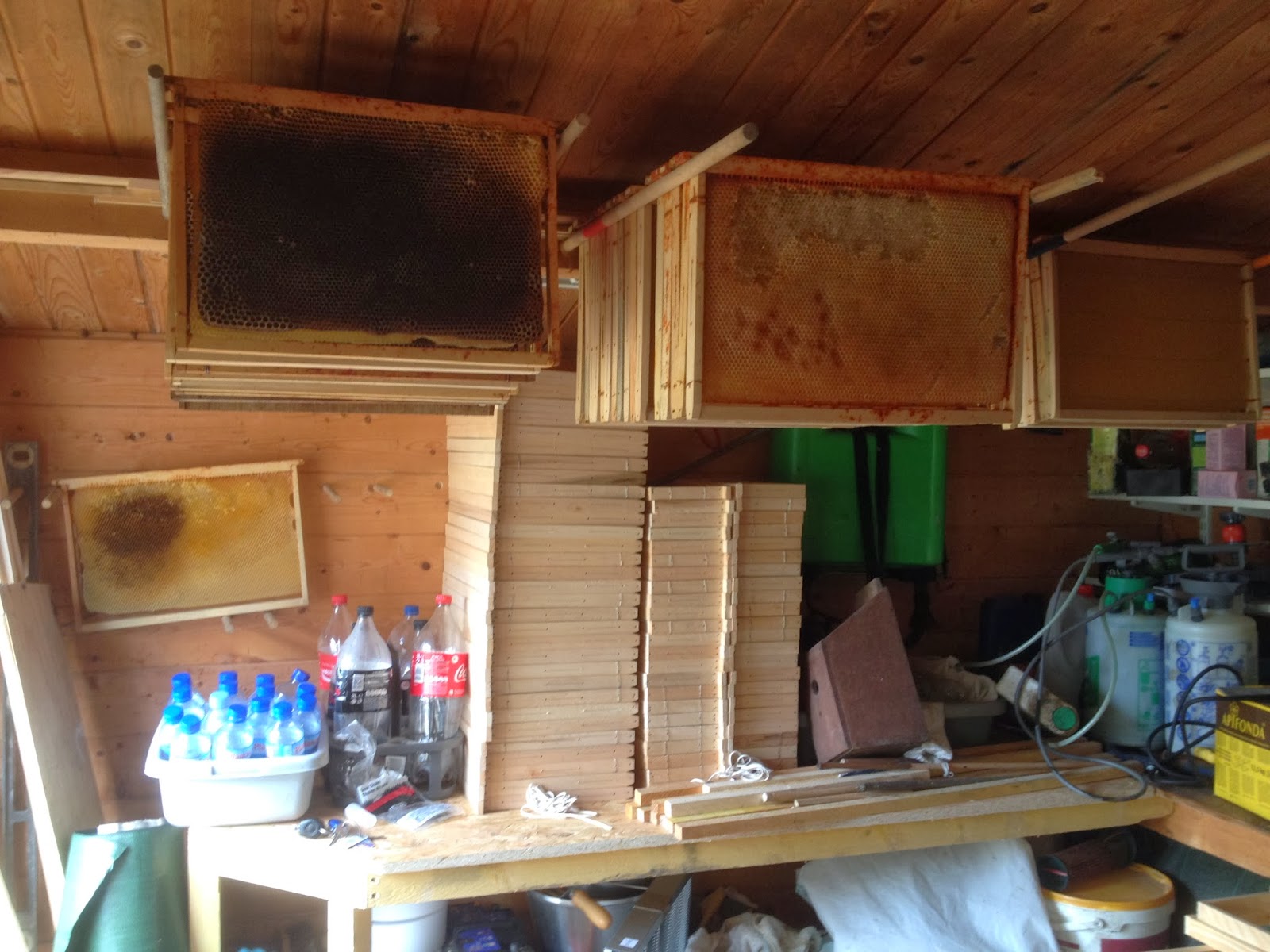 I have also extended my workshop bench for solely beekeeping stuff. hopefully a kind of "grafting table" too. ( when its tidy)


I am also making a new apiary at home, where my bees used to be. I have made up some wooded supports . These 4,5 meter lengths are of tanilised, pressure treated timber that were a bit twisted and on sale really cheaply at my wood store, so they are perfet for me and should last for a while. These beams sit on four concrete blocks which works really well. I will be covering the soil around with plastic sheeting and plantng through this with winter flowering honeysuckle, a long term plan for a bit of extra winter wild food. 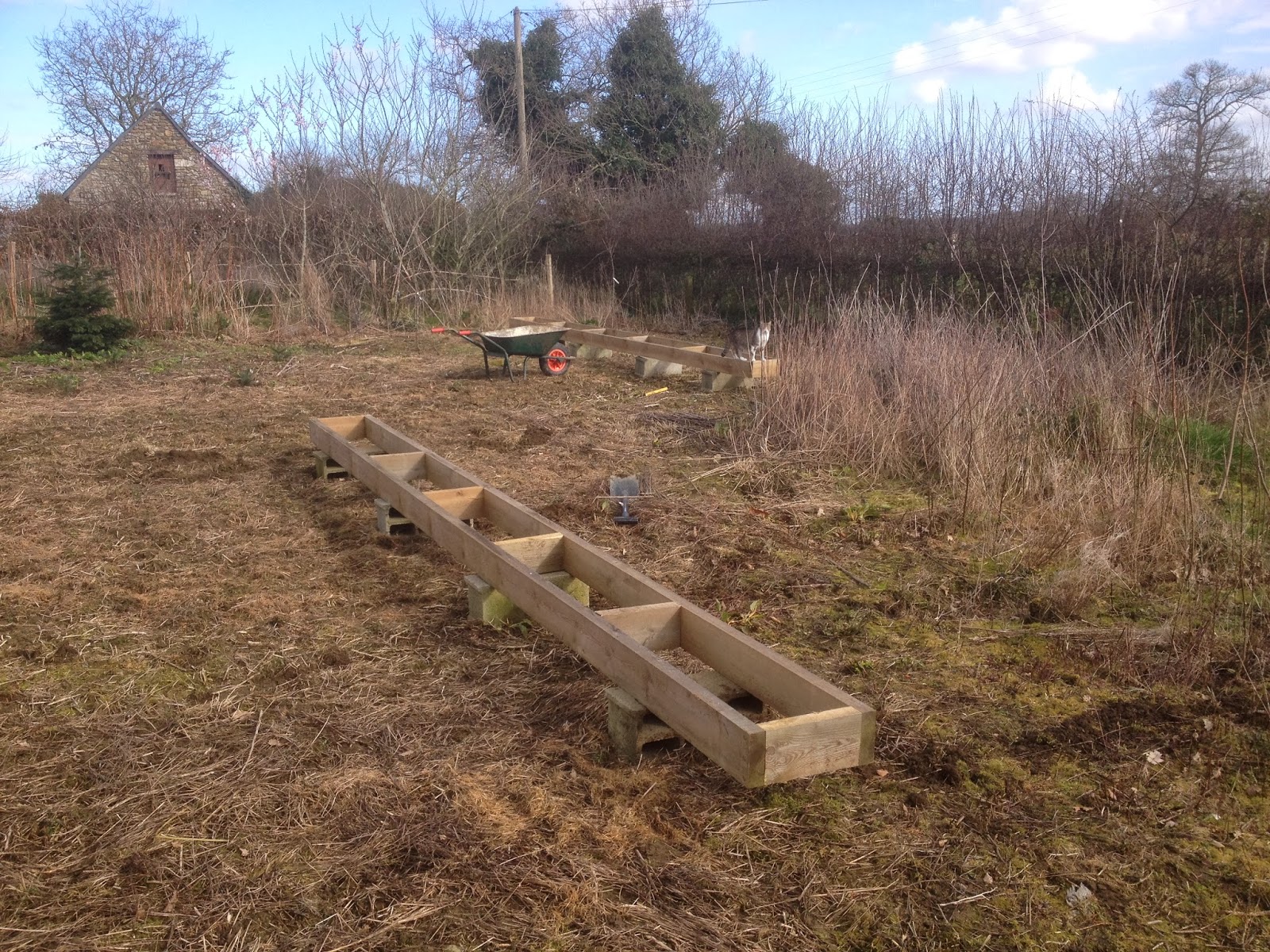 I want some of my bees here at home here so, more so for queen prodution in  the late spring and summer. I need the hives as close as possible to my house so everything is a bit easier.
I will be doing a video on  queen rearing in dadant hives, which is the same process during the initial screened bottom box and grafting section, but will be using a isolastion cage during the finishing process, as dadants dont have two brood sectons and keeping the queen away from the developing queen cells is not possible without a queen excluder, so i am working to find the best way to keep her isolated, but still keep the queen cells in the brood nest.

Its all looking good at the moment, plenty of food for the bees when its warm enough. Willow already starting to flower and also the prospect of much of the green manures flowering over the next few weeks. They are usually killed off by the winter frosts. so potentially a very strong spring ahead!

But theres some way to go, this week last year we had Blizzards..  Not again this year thanks!!