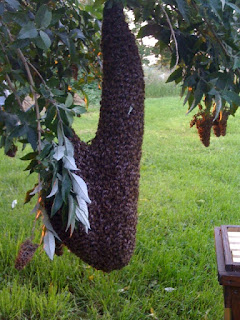 Very good sized swarm! They don`t come much better than this!

In all I set 23 traps and caught 7 swarms. Thats not a very high percentage , but if you were to offset the cost of the swarms you had caught, against your materials for the season, then you could say they more than paid for your expenses.

I tried new places to set my traps as well as placing some traps in places I had caught swarms before. In all I was very pleased with the success rate, a swarm of bees is more valuable to me than the money it may generate from its sale.

The size of swarms this year has been generally good.  It is a matter of debate over the conditions that give rise to larger than average swarms over a particular season.
For me it is a combination of things. Obviously the avalibility of food is one thing but i have a theory that if there`s plenty of of food avalible,  yet the number of bees out foraging hard is not large and the food brought back to the hive is done so without larger than average mortality to the hive, then this would help in above average swarm size, Another thing to mention is that we actually had good weather between March to the middle  of April which would also give a good start to the spring build up. Pollen, coming early in abundance, stimulating the queen in to spring laying mode, higher than average laying patterns, which may also give rise to above average size swarms casting in May and June, providing that that incoming food stayed the same levels.

Assuming that generally most swarms issue due to the fact that the hive is over populated and  the queen is more than likely to be in her second or third year, most swarms inevitably  requeen  after establishing a new colony.
This year has been a disasterous  year for re queening.
Essentially, as I have previously said, many hives swarmed at my apiary, due to the good size of the colonies and the feeding and treatment i have given them over the early spring. However the weather was so atrocious from mid April onwards, that the re queening in most cases failed. Swarms from my hives and my swarm traps were parallel in the re queening problems.
from mid may onwards the weather had been so poor, that emerging Virgin queens would have struggled to find enough good days to complete their mating flights, as well as enough males to mate with successfuly in the small window they have to complete their nuptules.

Many times this year, I have opened a hive to see if a new queen had started to lay only to find a colony of disorganized bees running around the frames noisily, with no eggs , or brood. I also often found a virgin queen from time to time, and in a couple of hives saw the same virgin queen, over a three week period.
Obviously completly unable to mate due to the diabolical weather that plagued us until mid july. MOstly the hives became drone layers with in a couple of weeks more and  the hive was lost.
Due to this requeening problem, my beekeeping teacher thinks that in this summer as much as 30% of wild bee colonies could have died out altogether. This is obviously very bad news for our wild or feral colonies here.

Well I have already a good idea of where most of my 30 swarm traps are going to go next year.
In fact I wish I had more nucs that were old and smelly enough to use, but i only have 38 in total and need to leave some availible for other jobs, such as artificial swarming in the spring.
Use your winters wisely, make up Nucs, prepare your material for next year, make up frames  and disinfect  your old hives with a bow torch.

Take a drive out to see possibe swarm trapping sites. It may take more than one tip to a homeowner to convince them that putting a swarm trap in their garden is a cool thing but recently i have found that most people are really excited about the idea.!!

On the positive side, I lost about 7 swarms or colonies this year so i have plenty of draw up frames for my swarm traps next year. so its not all bad news!!

I will post pictures of my swarm traping box in the next post, with detailed pictures for its manufacture.
Its a really simply but cool piece of kit if you don`t have a nuc box spare. Worth the time it to build 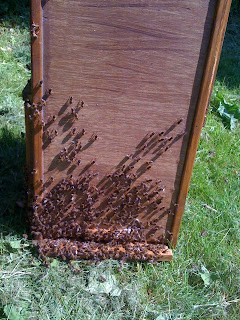