I had this swarm at the end of june and it wasnt that large so i put it straight back in to a nuc box. They have got away well, with the queen laying within 3 days. I fed them a bag of sugar as well. Even though there is lots of food around  the weather has not been in their favour, so at least if they were stuck in side then they have enough sugar to continue to build comb which is what swarms love to do. 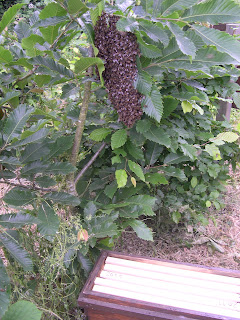 I had another 2 swarms from my hives sunday afternoon. There was a gap in the weather and the sun shone and it was actually quite warm for the afternoon. I was really busy at home but thought it would be a good idea to pop past and see if anything was happening that I needed to sort out. Sure enough it had. 2  of my hives had swarmed. One large sized one and one smaller one. The largest swarm pictured above) had settled nicely on the hedges in front of my hives. I had my swarm catching box but I didnt have another hive quite ready so I shook the swarm in to the box, put in the bottom door and turned it upside down, slowly. This bottom door has a small gap when nearly closed and gives the  bees total darkness once inside but still allows access in and out I will post some pictures of this later in the year. So after they initially rushed out to the front they soon realised their queen was safe and they were in an ideal place for the time being and then they started to fan on the front lip attracting all the other bees in. This bought be a bit of time until I could get another hive ready.


Bees Fanning producing the "come on in pheremone" Nasanov 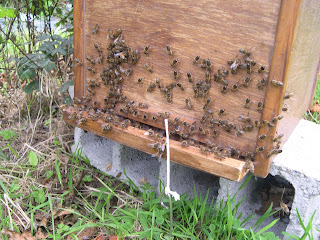 It was only when I turned around did I see the second swarm , high up above my hives in some lovely prickly sloe bushes. This was going to be a ladder job, back to the house again for a spare nuc and my biggest ladder. 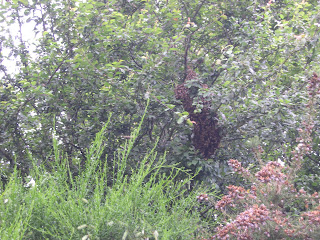 I managed to cut away the majority of branches with secateurs and this gave me a free hand to hold the swarm as I was cutting. It was a relatively simple job. I then came down the ladder and put the swarm on top of the nuc and let them get on with it. Swarm placed in to the top of the nuc. 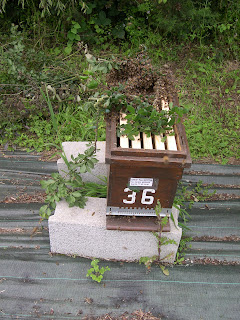 So I had captured the second swarm . I then went back to the first swarm and shook the bees installed in the box , in to a 10 framed hive. There was 5 new frames to the outside and  when I had shook them in, I placed some other partially drawn up frames in to the middle of the colony that had come from one of my other smaller swarms from earlier in the season that had become queenless and basically died out natrually.
This will give them a good start and help the colony get away quicker.

The chestnut trees are now in flower. They are the main source of the summer honey crop. This year the trees are only just coming in to full flower as the weather has been so rainy and cool. By this time last year all the trees had finished flowering and we were in the middle of a drought. 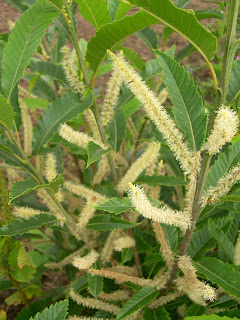 Chest nut trees are an amazing species of tree. Their wood has a very high calorific, value making it excellent fire wood and its easy to split and is so wet but you will need to dry it for 3 year before burning.
The tree copes very well with being pollarded. The stump below shows how much growth you can expect just after 2 years in a heavily leafed wood. Amazing I think! 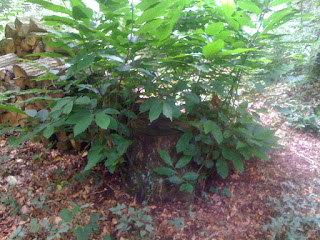 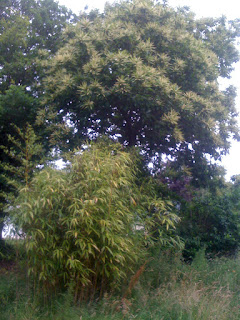 Another flower many insects love including bees is phacelia. Bees go mad for it. It is an annual . I like to sow as much as possible as late, in the year as I can so My bees have another source of pollen and nectar later in the year, just before the Ivy starts flowering. 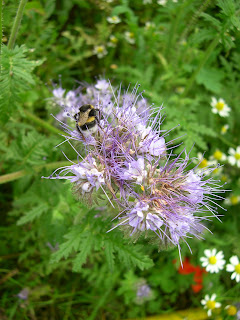 I have just sown about 400 meters square yesterday and left it to germinate. Its being well watered in today. It should be in flower in about 6 weeks . I will post some more pictures as it comes up and comes in to flower. By the way this cost me about  15 euros for the seed. Very little for a large return for the bees. 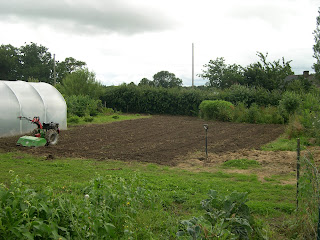