Well I have a bit of time on my hands( so to speak) as I had an accident with a chainsaw the week before last. Thankfully a very close shave and  no permanant damage to Nerves or tendons but at least three works off work, while the minor opp has time to heal!
This afternoon I decided it was time to try and make up a honey super. I`ve had the wood and all the parts for a while in my shed but not had the time to put them all together. I have previously been occupied with getting swarm traps ready and now thats completed and 22 out of 25 are out, I am feeling as though I am catching up a bit!

The sizes are the same in overall width and breadth but the depth of a honey super is roughly half that of a Dadant 10 frame, only 17 cms deep. 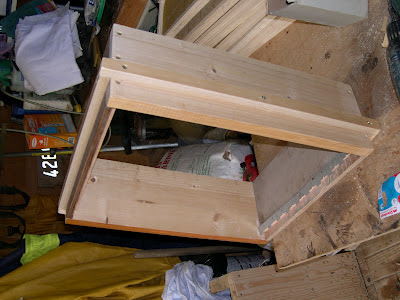 I also fit a band or wood around the upper middle outside of the super. This is better than handles and allows easy moving and stacking . When they are full of honey they are very heavy indeed!


To make it a bit easier and quicker I already had one side of a hive ready made so I cut that in to two, making the two longest sides of the super and used slightly thinner ply for the two inner pieces of wood that support the honey supers. The other beauty of using ply for the inner pieces is that rather having to get the normal wooden sides rebated to take the frames, I was able to cut it to the desired depth with a hand saw and then use a chisel to just lift out the ply to the required depth.
All in all quite a good result for a couple of hours work. I will be using this super next week. I am intending to place this super in order that the bees draw up the frames so I can re use it for the sumer honey which is really the only type of honey as far as I am concerned.

It looks like the weather may be starting to warm up towards the beginning of next week. Fingers crossed. That should give the bees about 3 weeks of foraging in a good nectar flow from the oil seed rape. Up until now we have had the moisture but the daytime temperatures for the last 2 weeks have been between 11 and 15 degrees. Not nectar gathering weather!!!