Its now the shortest day of the year. Things from now on are on the way up. Within the next 12 weeks the queen will have increased her laying to nearly full speed and subject to some mild weather in February and March,  we will  see the first noticable amounts of fresh pollen start to come in to the hive.
Initially it is mainly from the hazel Catkins, then as we move in to March you will see the wild willow (salix or pussy willow) start to flower. Following that,  many more plants become pollen bearing  and we are then in rich food gathering times for foraging bees.

Untill that lovely time, the bees have only their limited reserves to survive on. We can be positive that most colonies have gone in to this winter with well filled frames. However,  we must also bear in mind that because the weather has been so mild the queens may have actually continued laying well in to December. It  has also been suggested that some queens may keep laying during the winter months. We can only assume that the queen is able to match her egglaying levels to the amount of food coming in to the hive but ,just in case there is a short fall in stored sugar in the hive we generally like to give bees candy ( or what is also known as bakers fondant or sugar cakes)

The beauty of this food is that it is soft enough for the bees to actually eat straight away but it is also low enough in water content that it stable within the hive. It will not ferment or go off before the bees consume it or move it around the hive to a place that is more accessible for them. The other very practical thing about sugar candy is that it is very easy to give it to the bees. A slab of this candy can be either placed on top of the hive over the feeder hole, directly in a feeder tray or even over a hole in the crown board or frame cover.

The most important thing about where you put  your sugar is that it is placed in the upper or top part of the hive. Logically heat rises. This is why most overwintering bees huddle together right in the upper middle of the hive and form a ball shape covering 2,3 or 4 frames depending on the size of the colony. The honey  that the bees have naturally  stored is within these frames and throughtout the rest of the hive but many a lost colony is through starvation.

When the weather gets really cold and we have a period of sustained temperatures below freezing the bees generally go in to a semi vegitative state, in which they consume less honey. This is  good for the management of stores but  the downside is that they are unable to relocate their managed stores through  the hive to places closer to where it may be needed as they become virtually immobile. It it  not uncommon to open a hive in early spring and find the bottom of the frames full of  honey and pollen and the top of the frame full of empty cells and bees that have died with their heads in a cell, in a desperate attempt to find sufficient sugar to eat to produce heat for the colony

We give sugar in a liquid form in september immediately after the honey harvest. This gives the bees time to dry it out further and create necessary stores for winter. We give further sugar candy to hives that are smaller in size and that may be more vulnerable to starvation for the reason above and also to colonies that as beekeepers we feel they may need a little more feed availible ie not a large colony, a late swarm or an under performing colony  during the previous season.

You can make your own bee candy but it can be a little tricky when you are making up large volumes. It is availible at your local bee store. I buy my own. I find it more economical and less time consuming and  it works out actualy quite cheap per hive.


The 3 pictures below demonstrates just how quickly bees get stuck in to their sugar.
This picture was taken in early January. 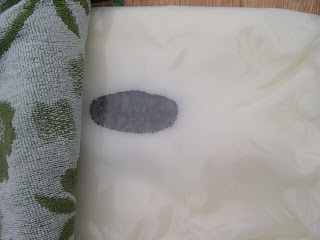 Close up of the above picture. 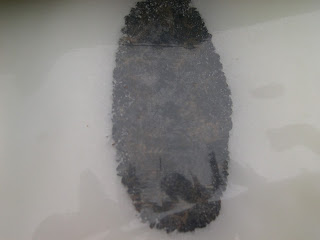 This picture below  was taken the middle of march. 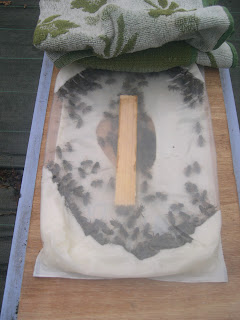 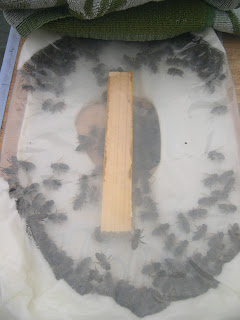 Method
If you want to look at your bees eating their way throught their candy cut a hole in the reveres side if the bag. This means that when you apply it to the hive or nuc you will be able to see through the clear plastic top of the bag and the writing on the bag stays underbeath on the frame cover side. 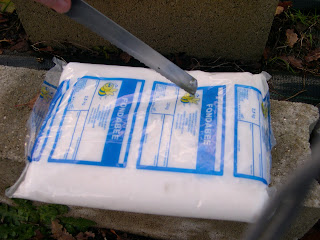 Bag with hole cut in to the top and candy exposed. 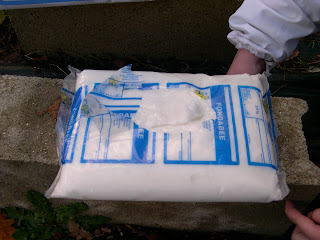 Place the sugar on top of the hive . When ready slowly remove the plug in to the top frame cover. you should find this glued down by the bees in preparation for sealing off the hive for the winter. it will come out with a frame lever.﻿ 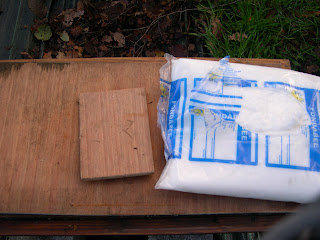 Once you have levered out the plug flip over the sugar slab and slide it in to position so the candy is in directly over the hole. You will probably not need a suit on for this if you are quiet and quick﻿. Dont be alarmed if you dont see bees rushing around. Its December and they are pretty quiet this time of year. 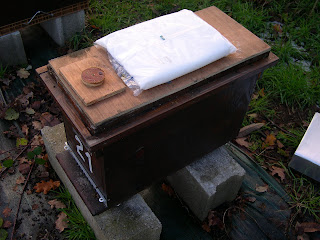