Second year as a professional beekeeper, Where did that go!?

"Only those who dare to fail greatly can ever achieve greatly" Robert F Kenedy.

We're already preparing for next year in a year that I haven't written a post since march!! Shall I give the usual bloggers excuses? "oh, I was so busy," well ain't that the truth.

My colleague who's my mentor and also my close friend said " say goodbye to your family in Mid March and you may get to see them again in September! how right he is!

I love my job more than ever and it's grown so much this year, grown in so many ways. Personally, I feel I've overcome so many hurdles mental and physical.

The Beekeeping year started off pretty badly for me. Reality came crashing in, after my amazing trip to Hawaii over Christmas and the new year, coming back to the realisation of huge winter losses.

So why did I have so many losses?

How could this have happened?? The losses were indeed huge! around 40 to 45%,  totally mind-blowing how someone could lose so much stock so quickly.

So why and how did that happen? in the video I give my reasons why I think this happened.

Huge winter Losses!
Believe it or not, this was one of the reasons and I never saw it! doh!!!

The previous spring of 2019 was amazing, Mimosa and Gorse pollen pouring into the hives in the third week of February will surely now be my "be aware" marker for future years. We had a great spring crop last spring (2019) and it was this that was the start of my winter losses to come. 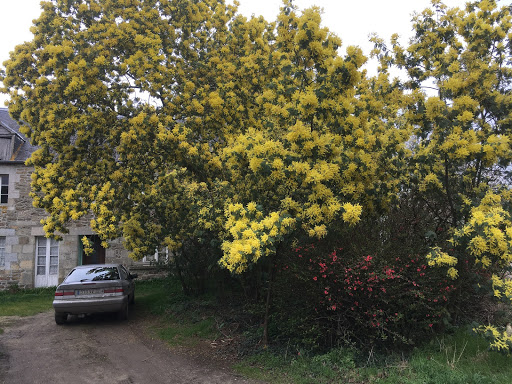 Mimosa and Gorse Pollen by the bucketload! 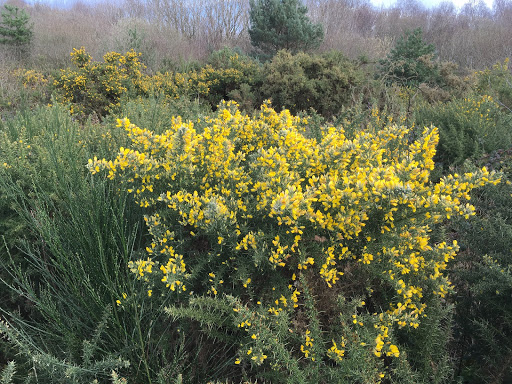 As I say in my latest video, "winter losses are mostly lost in late autumn before." This was the case for last year. Lots of strong spring swarming and poor mating afterwards. Many hives were a long time getting mated or were poorly mated. Add to this scenario my unexpected workload coupled with the inexperience to know I should have concentrated more on getting those colonies queenright quicker.

However, the spring quickly turned in to the summer and I did have a good summer honey crop. 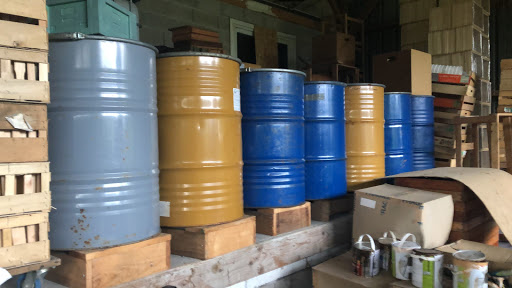 I am grateful for the harvest I had but this would be the lesson learned, never sit back just because the honey is in the barrel there was a huge amount of work to be done. All colonies to inspect, treat against Varroa, asses and feed, get them winterised fully insulated and winterised.

This is also where I fell down.  My Varroa treatments were  in on time but the Varroa were not completely

treated and some colonies still had large populations of those bloodsucking pests!

The weather really does matter in the autumn

The weather then turned right at the end of a long summer dearth with no appreciable rain from 18 degrees to around 10 degrees max and rain, lots of rain.

Bees need pollen to make winter bees, lots of pollen and the usual autumn Ivy in most years suffices admirably, but not in the autumn of 2019, the rain kept the bees in most of the autumn while I was unaware, sunning myself on the first of my two trips out to Hawaii!

So to summarize, lots of the previous swarming, many colonies not looked after properly, poor or little nutrition coming in through the door (going unnoticed) winter bees being raised too late with too higher varroa infection rate: a veritable recipe for disaster.

I have no regrets, it was what it was! Entering the spring was hard. Both my colleague and I had lots of losses, was there anything we could say we did recoup!

Beeswax is at a premium every year and we had lots of frames to melt down. Remember these are brood frames, that had no brood diseases,(they died of varroa and no bees) we could melt as many down as we wanted!

Before the melt and after 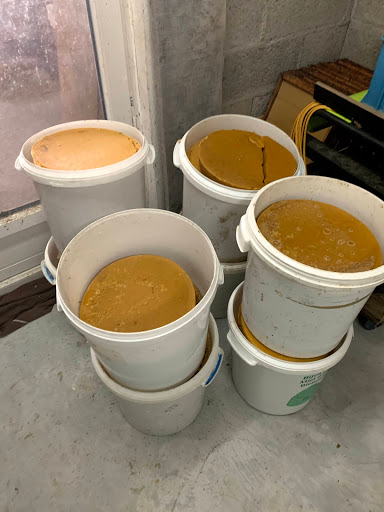 Some of our spoils of all the toils!
Our main beekeeping supplier offers a service where they take your wax and either buy it, exchange it or melt it down for you and give your wax back as beautiful foundation!

We still pay a little for the pressing but to have your own wax, mostly from your own cappings and melted down frames

Here is the wax, they did a beautiful and quality job! 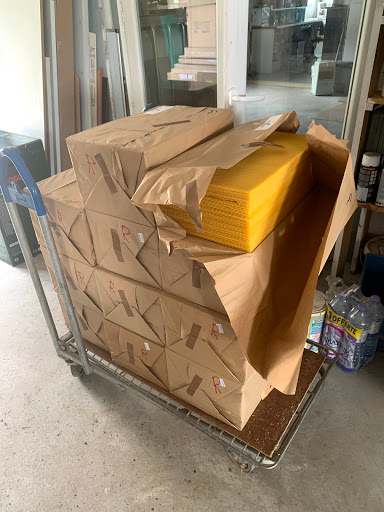 Covid 19 Lockdown was upon us, so we had plenty of time to wax up frames.  It was a big worry that we wouldn't be able to collect our wax but after a few calls, we had the authority to go and collect the material we needed, wax included. Now we had the wax to fill all the frames we needed! 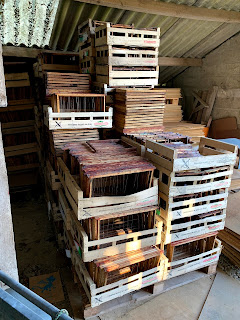 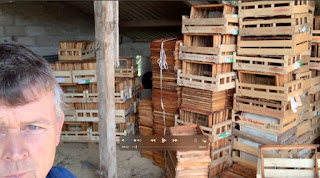 Here I am at the start of the rewaxing work, I was able to bring a load of frames home to work in the relative quiet of the veranda, beavering away, getting things prepared for the forthcoming season

Well that's all for now  I will show you my journey continuing in the next chapter! Spring bees, small spring harvest and how I  start rebuilding my apiaries.
Wishing you all well😊
Posted by Richard Noel at 11:25 PM